Royal Wedding Rewind: The Earl of Wessex and Sophie Rhys-Jones 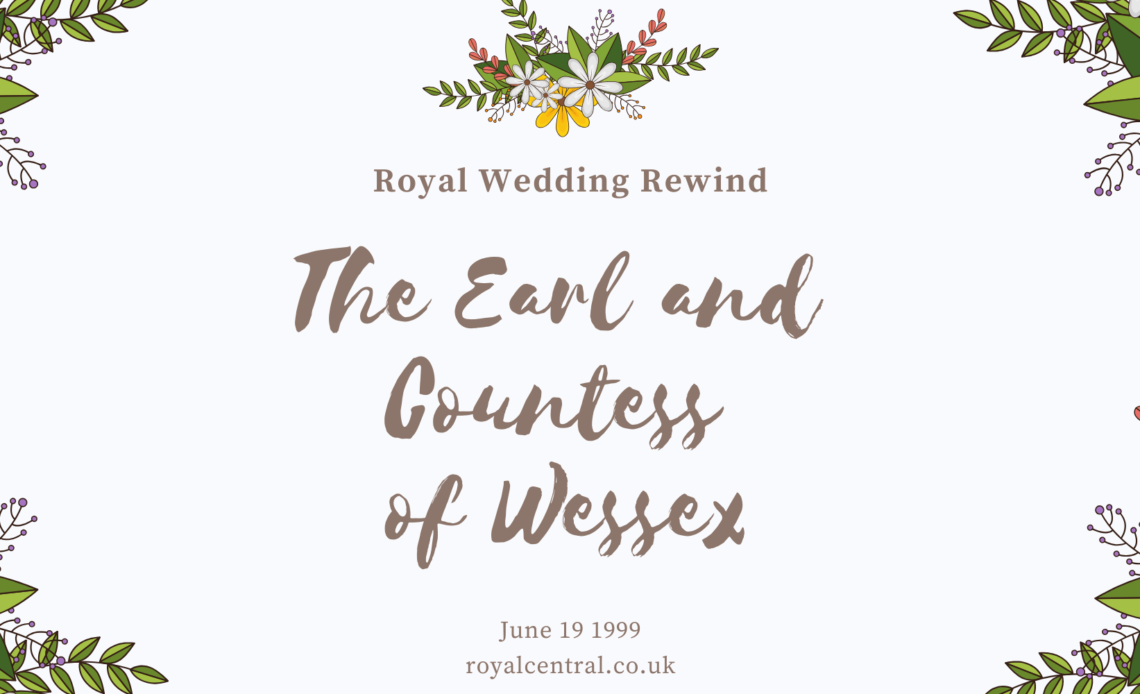 On 19 June 1999, Prince Edward, the youngest son of The Queen and the Duke of Edinburgh, married Sophie Rhys-Jones at St George’s Chapel, Windsor. The two had met at a tennis event in 1993.

They announced their engagement on 6 January 1999. Edward proposed to Sophie with a two-carat oval diamond flanked by two heart-shaped gemstones set in 18 carat white gold. The ring was made by Asprey and Garrard (now Garrard & Co) and cost an estimated £105,000.

At the time of their engagement, the couple expressed their wish that the wedding not be a state occasion, which led to no ceremonial state or military involvement. The ceremony would become mainly a family occasion. The then Prime Minister, Tony Blair, and other politicians were not invited.

The dress code was formal evening wear with no hats or headpieces. However, the groom’s grandmother, the Queen Mother, did wear a hat as she was rarely seen in public without one. The wedding was attended by about 550 guests.

Just hours before the ceremony, Prince Edward was created Earl of Wessex and Viscount Severn. Upon their marriage, the couple would become known as Their Royal Highnesses The Earl and Countess of Wessex. There was some surprise that Edward hadn’t been given a dukedom but it was also announced that it was planned for the prince to become Duke of Edinburgh, when the title became vacant. As it was, Edward was the first son of a monarch since George I to not be made a duke.

Edward’s brothers, the Prince of Wales and the Duke of York, acted as Edward’s supporters (the royal equivalent of “best man”). The three royal brothers left their limousines behind and walked past onlookers into the church just 20 minutes before the start of the ceremony. Children of the couple’s friends took on the roles of bridesmaids and pageboys. The four attendants were Camilla Hadden, Olivia Taylor, Felix Sowerbutts, and Harry Warburton.

Sophie would arrive with her father Christopher Rhys-Jones in a Rolls Royce owned by the Queen. The two would walk down the aisle to a fanfare by the Royal Marines. Peter Nott, the Bishop of Norwich would perform the ceremony. In comparison to other royal weddings, Sophie chose to say the word “obey” in her vow “to love, cherish, and obey.” Her second eldest sister-in-law, Sarah, the Duchess of York had done the same a little over 10 years prior at her wedding to Prince Andrew.

Keeping with tradition, the wedding ring was crafted from Welsh gold from the Prince Edward mine in Gwynedd. Notably, onlookers noticed Edward had little difficulty placing the ring on Sophie’s finger. The tradition of using Welsh gold for wedding rings of the royal family dates back to 1923.

Sophie wore a dress designed by Samantha Shaw. Made from hand-dyed silk organza and hand-dyed silk crepe, the dress featured rows of pearls and crystal beading. Sophie’s veil was held in place by an all diamond tiara from the Queen’s collection. Sophie would finish the look with a pearl necklace given to her by Edward for the wedding, Edward was given an 18-carat gold pocket watch in return.

Following the ceremony, Edward and Sophie rode in an open, horse-drawn carriage to their reception in St George’s Hall at Windsor Castle, passing thousands of wellwishers on their route. Guests were served canapes and champagne before dinner in St George’s Hall. The 10-foot-tall chocolate cake was made by Linda Fripp and adorned with decorations including daffodils and tennis rackets, a nod to the couple’s first meeting which took place at a real tennis event. The National Youth Orchestra of Scotland, the London Mozart Players and the band of the Royal Marines would provide the music.

Following the wedding, Sophie sent her wedding bouquet to Westminster Abbey to rest on the Grave of the Unknown Soldier, a tradition followed by all royal brides and dating back to 1923 when Lady Elizabeth Bowes-Lyon laid her flowers on the tomb on the way into her own wedding.

The new Earl and Countess of Wessex spent their honeymoon at Balmoral Castle. Now, 22 years on, they have two children and are among the most well popular members of the Royal Family.