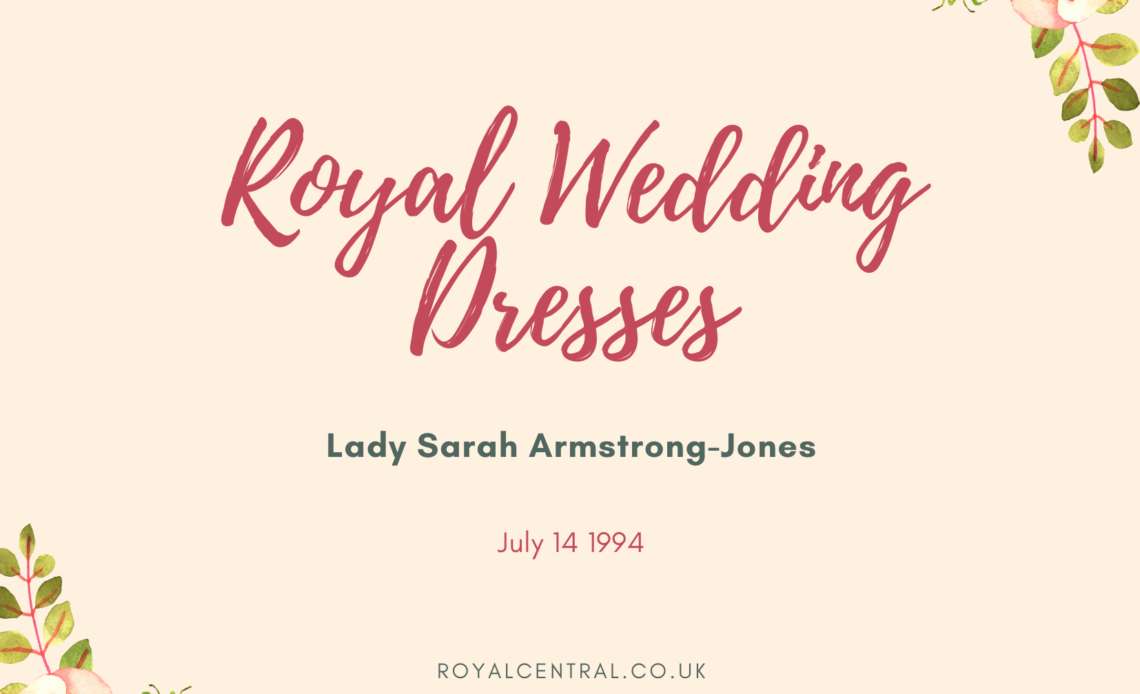 In the run up to this royal wedding, there was as much speculation about the guest list as there was about the bridal gown. As Lady Sarah Armstrong-Jones, only daughter of Princess Margaret and her former husband, Antony, Earl of Snowdon, prepared to marry Daniel Chatto, the chatter was about who might attend. They wed on July 14th 1994, as the bride’s royal cousins were going through marital woes. But when Lady Sarah stepped out of the car, the only talking point was her dress. For this gown is one of the all time classics when it comes to Windsor brides. It’s elegant, timeless and yet very much suited to its wearer. And over a quarter of a century on, it’s still irresistibly beautiful. Which begs the question, is Lady Sarah’s bridal gown the best royal wedding dress of them all?

It was designed by Jasper Conran and its beauty lies in its simplicity. The gown is made of ivory georgette with a corsetted bodice with square neckline and fitted sleeves. The tailored top gives way to a full length, flowing skirt that drapes into a small train, all covered by a long tulle veil.

The sparkle in the bride’s hair has been called the Snowdon Floral Tiara although in reality it began life as three brooches which were brought together to create this unique diadem. Sarah added foliage on either side of the diamonds, another delicate design detail that made this look all her own. Her bouquet was made up of cream flowers including roses. Those flowers were echoed in her bridesmaids posies which featured many of the same blooms but in pink. Sarah chose to dress her attendants, all adults, in outfits very similar to her own featuring fitted bodices and long skirts in ivory georgette. Add to that the precious pink petals in their hair, and you have pretty much the perfect wedding party.

The wedding itself was low key with just 200 guests attending as Lady Sarah Armstrong-Jones and Daniel Chatto said ‘I do’ at St. Stephen’s Walbrook Church in the City of London on July 14th 1994. However, their marriage attracted plenty of press attention and not just because of who the bride called ‘aunt’. The wedding came at the height of the Royal Family’s difficulties in the mid 1990s with both the Prince of Wales and the Duke of York separated but not yet divorced and a stream of negative headlines around the world.

Lady Sarah and Daniel Chatto are a famously happy couple. They have two sons together and have enjoyed successful careers in the arts. Their wedding marked a high point at a difficult time for the House of Windsor and they’ve helped it to weather the storms, albeit discreetly and mostly behind the scenes. As they mark twenty six years of marriage, they have much to celebrate. And we can enjoy another look at a bridal gown that surely has to rank as one of the loveliest of all.