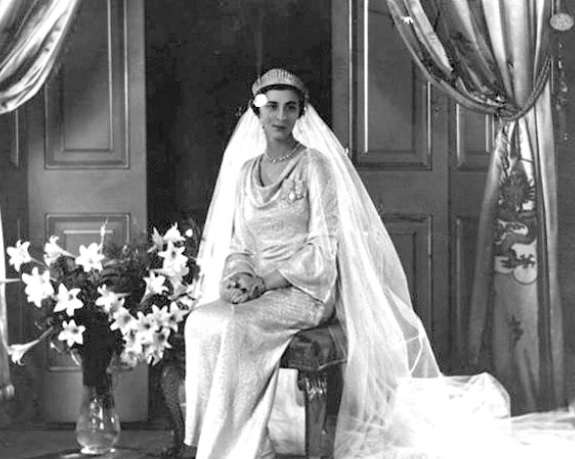 Nowadays, the phrase “royal trendsetter” brings to mind the Duchess of Cambridge and the “Duchess effect” and Queen Maxima’s bold fashion choices. However, several royals in the twentieth century have been fashion trendsetters. Princess Marina, the Duchess of Kent, quickly became a fashion icon in Britain upon her engagement to Prince George in 1934 and remained one for decades.

Princess Marina of Greece and Denmark was born on 13 December 1906 in Athens to Prince Nicolas of Denmark and Greece and Grand Duchess Elena Valdimirovna of Russia. The youngest of three daughters, the family lived at Tatoi Palace with the King and Queen, and Marina and her sisters travelled frequently throughout Europe. When the Greek monarchy was overthrown in June of 1917, the family was forced to live in exile and settled in Paris but still continued to stay with their European relatives.

Princess Marina first met Prince George in 1933, when she was invited to a party by her older sister, Princess Olga, and her husband, Prince Paul of Yugoslavia. They met again the next year when Marina was visiting her sister in London. When they were both visiting Olga and Paul in Yugoslavia, George proposed to Marina, and she accepted. Buckingham Palace officially announced the engagement on 28 August 1934, with the wedding set for 29 November 1934.

Marina’s wedding dress for her Westminster Abbey to Prince George was designed by French couturier Edward Molyneux. With a sheath silhouette, it featured a wide train, a draped cowl neck, and trumpet-style sleeves. The gown also had an embroidered English rose-patterned brocade that was woven in Lyon by Russian refugees (requested by Marina, an émigré herself).

Marina immediately became a fashion icon. Having spent her formative teenage years in Paris, she was intimately acquainted with haute couture and the Paris fashion houses. She made bold choices and knew what worked for her. Her hats, in particular, were popular, and copies were sold in shops as “Marina hats”. The Kinks released a song in 1969 titled “She Bought a Hat Like Princess Marina”, showing that her fashion legacy lasted for decades.

Making a significant statement, Marina started wearing cotton dresses when the Lancashire cotton industry was floundering. The move popularised cotton, and it was considered a far more versatile fabric than people once thought. She also started wearing trousers in the 1930s and continued to wear them throughout her adult life. And impressively, she had a colour named after her, “Marina Blue”, after she wore a turquoise-blue dress to Royal Ascot in 1961.

Although Princess Margaret was a fashion icon in her own right as an adult, her inspiration came from Marina. Supposedly as a young girl, Margaret said, “When I grow up, I will dress as Aunt Marina does.” Princess Marina seems to have largely been forgotten now, but her impact on British fashion cannot be ignored.