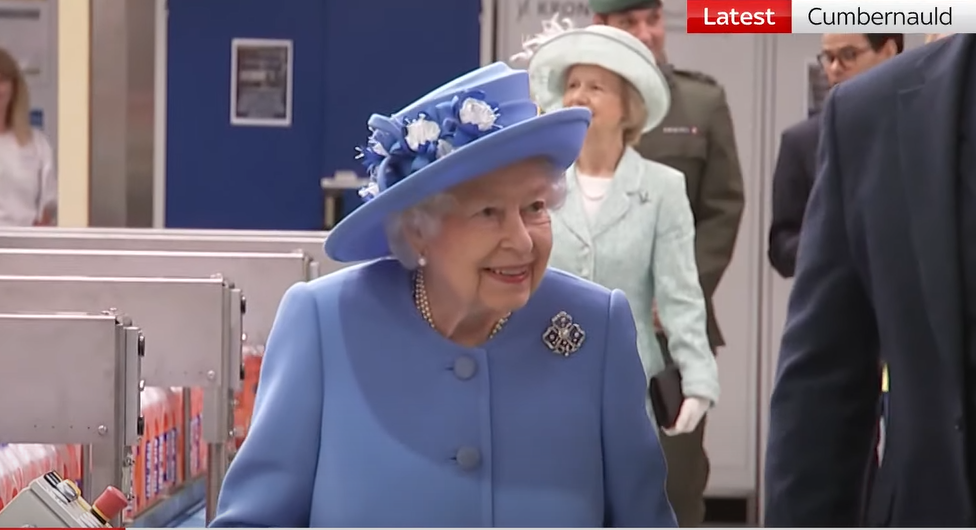 The Queen has embarked on her annual four-day tour of Scotland, starting her visit in Cumbernauld.

On Monday, Her Majesty was joined by her grandson, Prince William, who accompanied the 95-year-old monarch on her travels.

The first stop of the day for grandmother and grandson was AG Barr’s factory in Cumbernauld – the home of Scotland’s national drink, Irn-Bru.

Irn-Bru is a soft drink made to an original secret recipe, which contains 32 flavours, and is Scotland’s most popular drinks brand, beating even Coca Cola.

AG Barr was established over 140 years ago in Scotland, with Irn-Bru first being created in 1901.

On their visit, The Queen and the Earl of Strathearn were offered a glass of Irn-Bru to sample.

Her Majesty, who very rarely eats or drinks in public, politely declined. However, Prince William was more than happy to taste a sample of the produce.

During the visit, Her Majesty and the Earl were given an overview of the history of AG Barr before meeting employees to learn about the company’s place in local community life.

After Prince William sampled some of the products, the royal duo signed the visitor’s book before departing.

Over the next four days, The Queen will undertake a range of engagements celebrating Scottish community, innovation and history.

Prince William, known by his Scottish title the Earl of Strathearn, joins his grandmother for engagements on Monday 28th June.

Princess Anne will travel to Scotland to accompany her mother for engagements on Wednesday 30th June and Thursday 1st July.

Due to the need to avoid crowds gathering, exact details of engagements are not being released in advance.

The Queen undertakes a series of public engagements in Scotland at the end of June or beginning of July every year, and remains in residence at the Palace of Holyroodhouse throughout.

Traditionally, as part of Holyrood Week, Her Majesty hosts Garden Party and Investiture ceremony at the Palace. However, in line with current guidelines, these large scale events will not take place this year.