All The Queen’s American Presidents 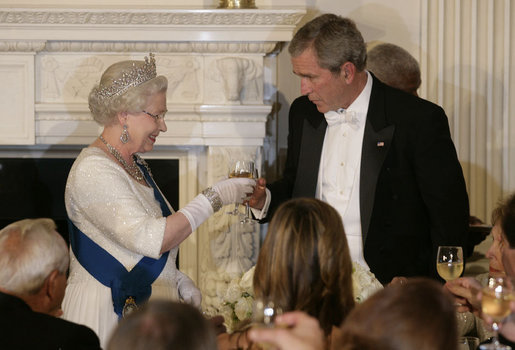 Today, President-elect Joe Biden will join the 13 other Americans who have served as President of the United States while Her Majesty has been the monarch of our closest ally.

The first United States president who served while The Queen was on the throne was President Harry S. Truman. President Truman served as Commander-in-Chief from President Franklin D. Roosevelt’s passing in April 1945 through January 1953. Truman first met then Princess Elizabeth when she visited Washington D.C. in November 1951 where she and the Duke of Edinburgh stayed with Truman and his family at Blair House. Truman was finishing up his time in office when The Queen ascended the throne in 1952.

President Dwight D. Eisenhower, or Ike as he was commonly called, served from 1953 through 1961 as the 34th President of the United States. He was also the first president to meet Her Majesty after she had become queen. In October 1957, Elizabeth II travelled to the United States on an official visit and her first as Queen, where President Eisenhower and First Lady Mamie Eisenhower hosted her and the Duke of Edinburgh for four days at the White House. She would meet Ike again in Canada in 1959 where they opened the St Lawrence Seaway by sailing on the royal yacht, Britannia. Her Majesty even wrote to President Eisenhower in January 1960 to give him her recipe for drop scones, which she had promised him when he visited Balmoral.

The 35th President of the United States, John F. Kennedy was Chief Executive from 1961 until his assassination in Dallas, Texas, by Lee Harvey Oswald on 22 November 1963. President Kennedy, the youngest person to ever be elected president, alongside his wife, First Lady Jacqueline, met Her Majesty and the Duke of Edinburgh in June 1961 at a reception at Buckingham Palace. This meeting garnered much attention in the media as the young and popular Kennedy had just taken office a few months prior after defeating Richard Nixon in November 1960. President Kennedy later said that he cherished the memory of that “delightful evening”.

After President Kennedy’s assassination in Texas, Lyndon B. Johnson became the 36th President of the United States. He is the only U.S. president never to meet The Queen during his presidency. He was in office from 1963 to 1969.

Following Johnson was President Richard Nixon, who would go on to become the only president in history to resign. President Nixon first met Her Majesty on an unofficial visit to the United Kingdom after his election in 1969. On this occasion, The Queen presented the newly elected president with a signed photograph of her and Prince Philip. First Lady Pat Nixon did not accompany her husband because the trip was put together so quickly. However, Her Majesty would meet the First Lady in 1970 when she and President Nixon visited the United Kingdom in October 1970.

President Gerald Ford served in the Oval Office from 1974 to 1977. He met Her Majesty during America’s bicentennial in 1976, where she was in Washington D.C. for a state visit. A few hours before the state dinner, those at the White House were rather nervous due to the “sudden downpour with torrential rain, thunder, lightning,” according to First Lady Betty Ford. However, in the First Lady’s memoirs, she commented on how easy The Queen was to deal with and her grace.

Jimmy Carter was in office from 1977 through 1981. He had the honour of meeting Her Majesty in May 1977 when he and First Lady Rosalynn dined at Buckingham Palace. President Carter said of his discussion with The Queen during the dinner, “Well, one of the things I told Queen Elizabeth was how much the American people appreciated her coming over last year to celebrate our 200th birthday. And she said that it was one of the warmest welcomes she’d ever received.”

President Ronald Reagan was known to have an excellent relationship with Queen Elizabeth and met her a couple of times. He also hosted The Prince and Princess of Wales, where John Travolta famously danced with Diana on the White House dance floor. The 40th President of the United States was a guest at Windsor Castle in 1982, where the Reagans shared a formal dinner with Her Majesty and Prince Philip. Queen Elizabeth visited President Reagan at his ranch in California in 1983. The pair shared a strong love of horses and were pictured riding together at Windsor.

In his memoir, An American Life Reagan wrote, “There were many, many small moments that made my job fun…Landing in a helicopter on the lawn of Windsor Castle for a fairytale visit with Queen Elizabeth and the royal family. The highlight of our stay there came when the Queen and I went horseback riding together, and Nancy and Prince Philip took a horse-drawn carriage ride. I must admit, the Queen is quite an accomplished horsewoman. We will always remember our visit to Windsor Castle because of the Queen’s and Prince Philip’s warmth and welcoming hospitality – they could not have been more gracious.”

In 1989, President George H. W. Bush was inaugurated as the 41st President of the United States. He had lunch at Buckingham Palace with The Queen in 1989, and she travelled to America in 1991, where she was the guest of honour at a state dinner. On this occasion, someone at the White House misjudged the podium’s height where Her Majesty was to give a speech. This was dubbed “Podiumgate” because all that could be seen of The Queen was her purple hat.

President Bush said in his welcome speech, “We have got a lot of things in common. Most of all what links our countries is less a place than an idea. The idea that for nearly 400 years has been America’s inheritance and England’s bequest. The legacy of democracy, the rule of law, and basic human rights.”

As the 42nd President of the United States, Bill Clinton met Queen Elizabeth first in 1994 when they both attended the service to mark the D-Day landings in France. President Clinton said, “She’s a highly intelligent woman who knows a lot about the world…I think she’s a very impressive person. I like her very much.” They would meet again when Clinton, First Lady Hillary, and First Daughter Chelsea visited Buckingham Palace during a five-day European tour in December 2000. The White House said the trip was “meant to underscore Anglo-American ties,” and President Clinton announced that a U.S. warship would be named in honour of Britain’s late Prime Minister, Winston Churchill.

By 2000, President George W. Bush had taken the White House. He, of course, was president when the September 11 attacks happened. In a show of solidarity, Her Majesty had the Star Spangled Banner played during the changing of the guard and was seen singing the American anthem during the memorial service a few days later. President Bush visited the United Kingdom in 2003, and he and First Lady Laura stayed with Her Majesty and Prince Philip in Buckingham Palace. Then in 2007, Her Majesty travelled to the United States to help celebrate the 400th anniversary of the founding of the Jamestown colony. It was during this visit that Bush flubbed his lines in his speech and accidentally said, “You helped our nation celebrate its bicentennial in 17…” before catching himself. He turned and winked at Her Majesty and would later comment that she gave him “a look only a mother could give a child.”

Before Trump, the latest U.S. President to meet The Queen was President Barack Obama. His admiration for Her Majesty has always been evident, and before meeting her for the first time, he said, “There’s one last thing I should mention that I love about Great Britain, and that is The Queen.” He went on to express how much he was looking forward to finally getting to meet her in person while he was in the country for the G20 Summit. The President and First Lady would later go on an official state visit to the United Kingdom in 2011. When she celebrated her Diamond Jubilee in 2012, President Obama sent a video of congratulations on behalf of himself and the American people.

The good relationship with Her Majesty has extended to the rest of her family, as well. The First Lady is known to have a warm relationship with Prince Harry, with whom she helped promote and organise the Invictus Games in Orlando of 2016.

In 2016, Donald Trump was elected as President of the United States and was sworn in office in January 2017. He met Her Majesty on several occasions, including a 2019 State Visit to the UK.

The Queen, during her State Banquet speech, said: “Mr President, as we look to the future, I’m confident that our common values and shared interests will continue to unite us.”

Soon to be First Lady Dr Jill Biden has already worked with the Duke of Sussex on the Invictus Games and was in London to help him launch the initial games. She and Joe Biden were seen at Harry’s side at the Toronto Invictus Games in 2017, as well.