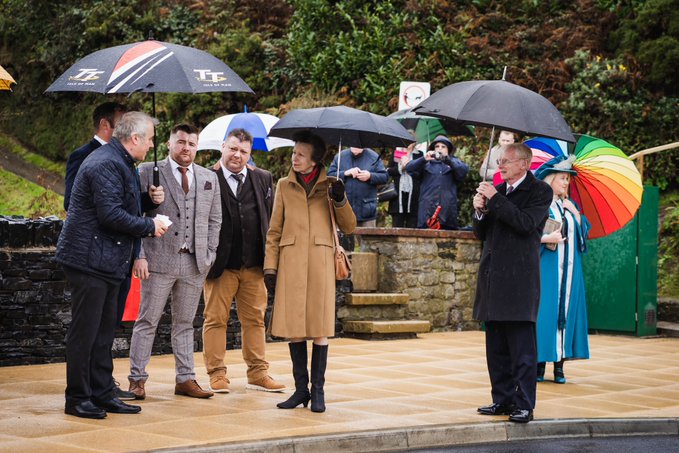 The Princess Royal travelled to the Isle of Man for a busy day of engagements Friday, including opening the new multi-million-pound events space and extension at the Ramsey Park Hotel.

Ramsey is the second-largest town on the Isle of Man and the hotel, which opened in 2012, overlooks Mooragh Lake and the sea. The property originally included 30 bedrooms and the renovation includes an additional 30 rooms, along with a large new events space called the Ayres Suite, with water views and room for weddings, corporate events, and other functions of up to 250 people.

Sir Richard Gozney, Lieutenant Governor of the Isle of Man and The Hon. Mrs Louloudis, Lady in Waiting accompanied the Princess to the hotel, where she was welcomed by its owner, Trevor Hemmings, CVO and hotel manager James O’Neill.

Around 60 representatives from the local business community met Princess Anne during a champagne reception and buffet in the new Ayres Suite.

Richard Grime of Classic Lodges Hotels told Hospitality & Catering News, “To have a member of the Royal Family open the hotel is a huge honour for the Isle of Man and for everyone who has worked on the project and for everyone working at the hotel.”

“We have held a number of weddings and events already and have many more booked over the next 12 months,” said O’Neill. “TT week and the Manx GP were extremely busy for the hotel and we are delighted to be hosting the Manx Diabetic Group’s Ball on 9th November.”

Friday’s visit marks the first time the Princess Royal has been to the Isle of Man since 2015. During her day out, she also attended the official opening of the refurbished Douglas Market Hall, where she unveiled a plaque to commemorate the new facilities. In addition, she stopped at the House of Manannan museum in Peel and the Cathedral Isle of Man, along with opening the new Harbour Bridge in Peel.