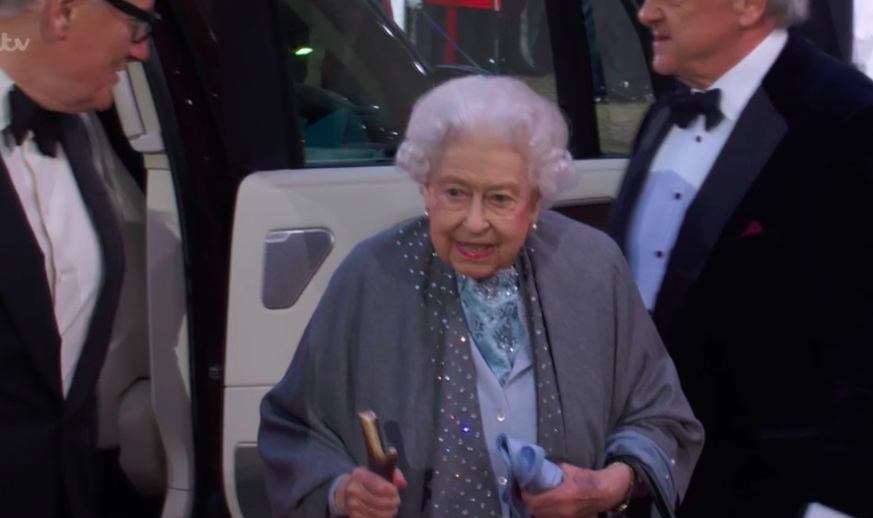 The Queen chose platinum silver for her first major event of this summer’s Platinum Jubilee celebrations.

Her Majesty wore a platinum shift dress covered in silver embellishments for a special evening of festivities at the Royal Windsor Horse Show on May 15th 2022. The Queen also wore a long, dark grey wrap around shawl with a sparkling trim in silver. It was a chilly evening in Windsor and between the dress and the shawl, there was also a pale grey cardigan.

The audience gave The Queen a huge cheer as she arrived at the Horse Show by car, while the Army, Navy and Royal Air Force provided a guard of honour as she entered the grounds. Her Majesty walked quickly, with a stick, from her vehicle to a special mini lift that took her into the royal box.

She was joined there by the Earl and Countess of Wessex with Sophie choosing another Jubilee colour for the evening. The Countess was dressed in purple for this beginning of the celebrations.

The Royal Windsor Horse Show paid tribute to The Queen and her 70 year reign with a spectacular show called ”A Gallop Through History” which included performances from Dame Helen Mirren as Elizabeth I. There was also a special tribute from Lady Louise Mountbatten-WIndsor who drove one of Prince Philip’s carriages into the arena, with The Queen appearing particularly moved at that moment.

The Queen marked her Platinum Jubilee on February 6th 2022, the 70th anniversary of her accession. However, the main celebrations for this historic milestone take place this spring and summer with the major weekend of events in London from June 2nd until June 5th 2022.