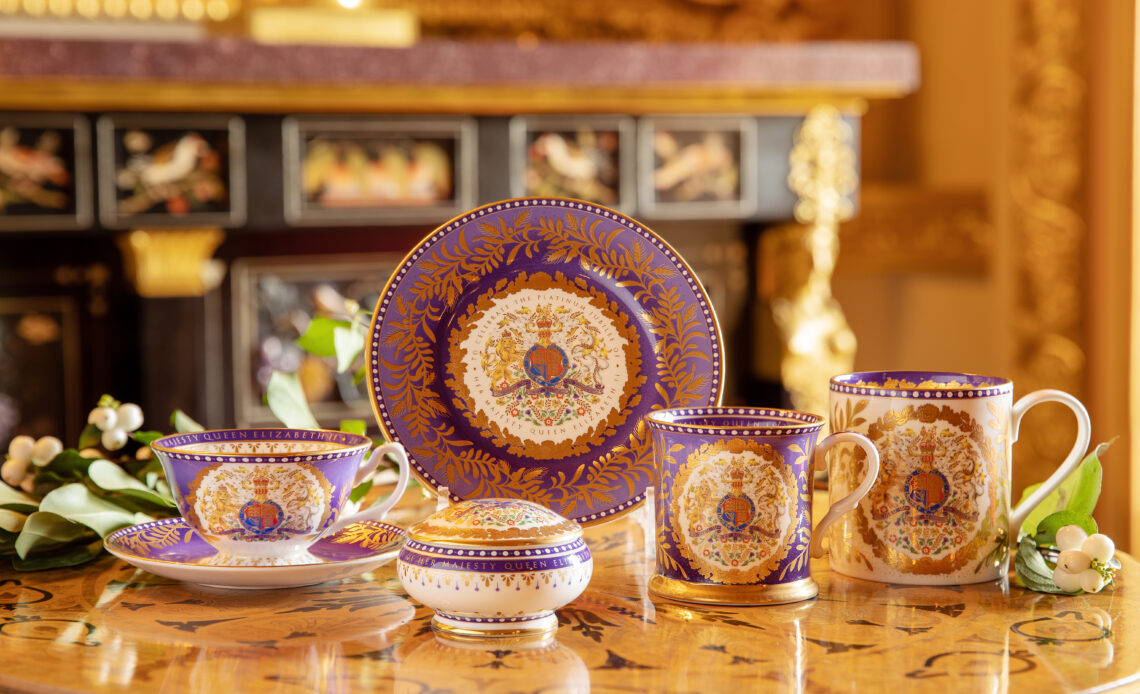 The first official souvenirs for the Platinum Jubilee have gone on sale.

The Royal Collection Trust has issued a range of china as well as Christmas decorations with just three months to go until the 70th anniversary of The Queen’s reign.

The design on the new range is inspired by the Robe of State worn by The Queen for her Coronation in 1953. It features a deep purple background, covered in golden decorations. At the heart of the design is the coat of arms with its symbols of the four parts of the United Kingdom – the rose, the thistle, the daffodil and the shamrock. The design also features a border of oak leaves, to denote strength, stability and longevity as well as olive leaves for peace and ears of wheat with their meaning of plenty.

Production of the souvenirs is also a UK wide affair. The chinaware is being hand made in Stoke-on-Trent using techniques stretching back to the 18th century. The fabricware in the new range is being made in Northern Ireland while the biscuits now on sale are baked in Scotland.

Christmas decorations marking the Jubilee have also gone on sale with a fine bone china bauble (£45) and a crown decoration (£25.00) in the range.

All the profits from the sale of this official range of commemorative items goes to the Royal Collection Trust. The Trust is a registered charity, set up to oversee the conservation of the Royal Collection and make it accessible through exhibitions and educational projects. It receives no public funding.

The official book, marking the historic celebration, has been put on sale at the same time. The Queen: 70 Glorious Years is a hardback and features over 77 images chosen to represent The Queen’s reign. Each is accompanied by a set of quotes from Her Majesty. Photos include moments from official events including Trooping the Colour and the State Opening of Parliament as well as more intimate, family pictures. It’s priced at £19.95.

All the products are available in the gift shops of Buckingham Palace, The Queen’s Gallery, Windsor Castle and Holyroodhouse Palace as well as the RCT online shop.

The Queen marks the 70th anniversary of her reign on February 6th 2022. She is expected, as usual, to keep that date privately as it also marks the anniversary of her father’s death. The main celebrations for the Platinum Jubilee will take place between June 2nd and June 5th 2022.