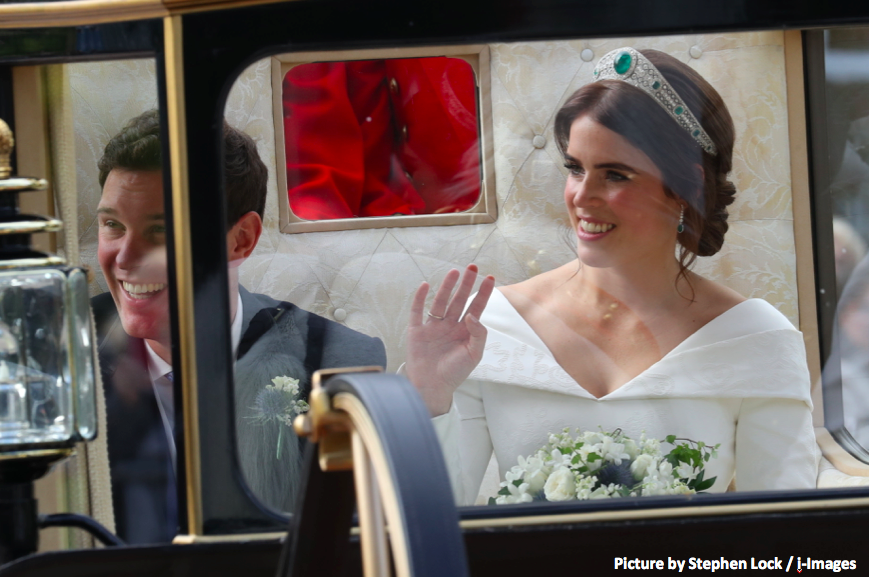 During her record breaking reign, Queen Elizabeth II has worn many pieces of jewellery. The Monarch owns an historic collection of jewels, privately held and others part of the vast royal legacy she oversees.

While there are countless pieces of jewellery to note, Royal Central takes a look at the most famous emeralds of Britain.

The Grand Duchess Vladimir Tiara is sometimes referred to as the Diamond and Pearl Tiara. In 1921, the tiara was bought by Queen Mary from the Grand Duchess Elena Vladimirovna of Russia, the mother of the Duchess of Kent. Mary purchased the piece for £28,000.

The Grand Duchess, who was known after her marriage as Princess Nicholas of Greece, inherited the tiara from her mother. Her mother, Grand Duchess Maria Pavlovna, received the tiara as a wedding gift from her husband in 1874.

During the Russian revolution in 1917, the tiara was hidden along with other jewels in Vladimir Palace. The jewellery was later saved from Soviet Russia by British art dealer and secret agent, Albert Stopford.

The tiara originally had 15 large drop pearls. Queen Mary then had it altered to accommodate 15 of the Cambridge cabochon emeralds. In modern times, it’s not uncommon for the pearls to be put on the tiara as an alternative to the emeralds.

Queen Elizabeth II inherited the tiara from her grandmother in 1953. It is almost exclusively worn with the Cambridge and Delhi Durbar parures which also contain large emeralds.

The Queen was seen wearing the tiara in her official portrait as Queen of Canada. None of the Commonwealth realms besides the United Kingdom have their own crown jewels.

The Cambridge and Delhi Dunbar Parure

The Delhi Durbar Tiara was made by Garrad and Co. for Queen Mary to wear at the Delhi Durbar in 1911 which marked the Coronation of King George V and Queen Mary and their proclamation as Emperor and Empress of India.

As the Crown Jewels never leave the country, George V had the Imperial Crown of India made to wear for himself at the Durbar, while Queen Mary wore the tiara.

Mary’s tiara would be part of a set of jewellery that included a necklace, stomacher (a decorated panel of a woman’s bodice or gown,) a brooch, and a pair of earrings.

Made of gold and platinum, the 8 cm tall tiara has the form of a tall circlet of lyres and S-scrolls which are linked by festoons of diamonds. Originialy it was set with 10 of the Cambridge emeralds that were acquirerd by Mary in 1910. The emeralds were first owned by her grandmother, Mary Adelaide, Duchess of Cambridge.

The diamond and emerald headpiece, made by the French jeweler Boucheron, is just over 100 years old as it was made in 1919.

The tiara was part of Dame Margaret Greville’s 1942 bequest to Queen Elizabeth, the Queen Mother. The piece features diamonds and several large emeralds in a kokoshnik-style platinum setting.

Most recently, the tiara was seen on Princess Eugenie of York during her October 2018 wedding to Jack Brooksbank. This marked the first public wearing of the tiara by a member of the royal family.

Eugenie paired the tiara with diamond and emerald drop earrings, a gift from her now-husband.

This piece was made from a present of emeralds and diamonds from the Ladies of India. The choker created by Garrards in 1921 for Queen Mary.

In 1981, the choker was given to Princess Diana as a wedding gift from the Queen. The Queen inherited the piece from her grandmother in 1953. Diana famously wore the choker as a bandeau during an event in Melbourne in October 1985. For other events, the piece was worn as a choker.

The Prince of Wales presented Diana with a diamond and emerald Art Deco bracelet as a wedding gift. On her 22nd birthday, in 1983, Diana received matching emerald earrings as a gift. The choker is now in the Queen’s collection.

The Queen Victoria Emerald Tiara was designed by Prince Albert, the Prince Consort of Queen Victoria. The tiara was made by court jewelers under his supervision in 1845. According to records, the Prince took a key interest in the re-cutting of the Koh-i-Noor diamond in 1852 after it arrived in England from India. The Duke of Wellington also became involved in the project.

A few years prior, in 1843, a necklace, earrings, and a brooch were made for Victoria. She noted in her diary how she loved the jewellery and how she thought her husband was very talented with his design.

Victoria chose not to include the set in the list of “royal jewels”, meaning they would not move on to her son upon her death and then continue to move from monarch to monarch. Instead, she initially loaned the tiara to one of her granddaughter in the 1880s. The tiara was not included in an inventory of Queen Victoria’s jewels in 1896. It’s believed the tiara was likely passed down to relatives.

Seven decades later, the tiara was spotted on Caroline, the wife of the 3rd Duke of Fife during the State Opening of Parliament in 1960.

The tiara was most recently displayed at Kensington Palace in 2019.