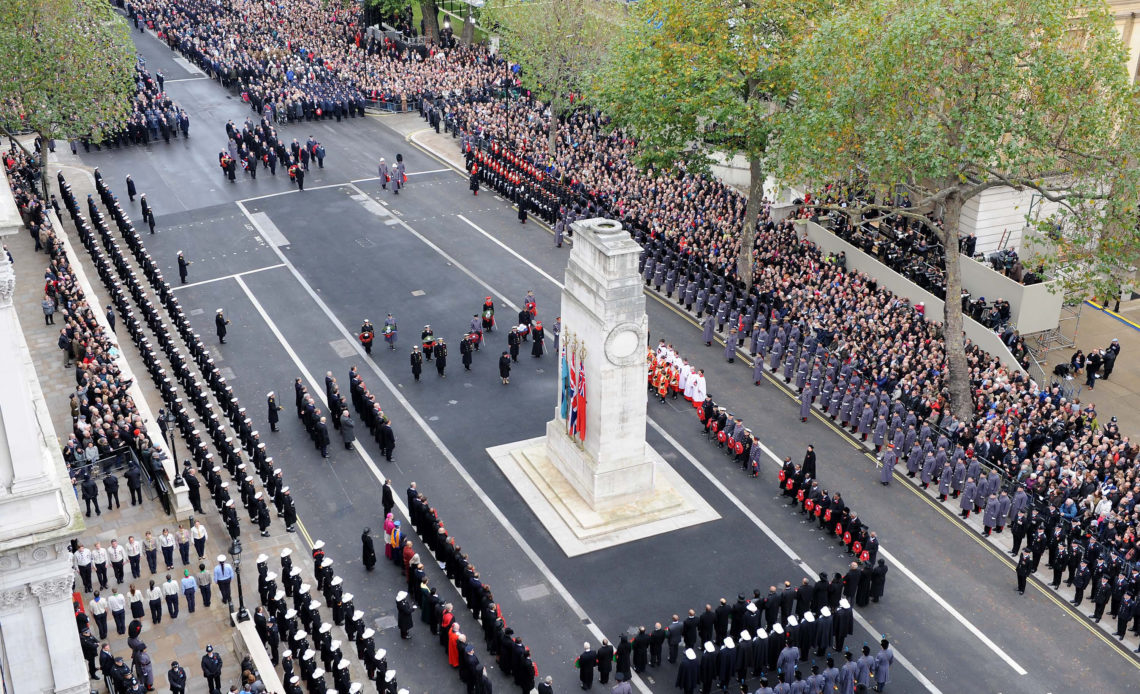 On this remembrance weekend, Her Majesty The Queen will once again lead the nation at the National Service of Remembrance, held at the Cenotaph in London on Remembrance Sunday. The service, which includes a two-minute silence at 11 am, remembers British and Commonwealth forces, civilian servicemen and women and those from allied nations who have served in every conflict since the First World War and honours the sacrifice of those who have given their lives in the service of their country. The service is a significant part of the Royal Family’s calendar, with many members of the Royal Family also attending associated remembrance events and services.

The first formal remembrance event took place in London 100 years ago, in November 1919, at the request of King George V. The fighting of the First World War had ended with the signing of the Armistice at 11 am on the 11th November 1918, and the conflict was formally ended in June 1919, with the signing of the Treaty of Versailles. A letter published in the London Evening News in May 1919 suggested that a silence was observed to remember those who gave their lives during the First World War. This suggestion reached the King, who proclaimed on the 7th November 1919 that a two-minute silence should be observed in order to remember the sacrifice of the fallen; ‘All locomotion should cease, so that, in perfect stillness, the thoughts of everyone may be concentrated on reverent remembrance of the glorious dead’. Following the King’s proclamation, the first Remembrance Day in Britain and the Commonwealth was held on the 11th of November 1919.

Since 1920, Remembrance Day services have been observed at the Cenotaph in London. Made of Portland stone, the Cenotaph was designed by Sir Edwin Lutyens and was unveiled as a permanent memorial to the fallen of the First World War on the 11th November 1920 by King George V. Wreaths of poppies, the symbol of remembrance and hope for a peaceful future, are laid at the foot of the Cenotaph by the Royal Family, politicians, religious leaders, representatives of states and both the auxiliary and armed forces during the service.

For the duration of the Second World War, a day of remembrance was held on the Sunday closest to Armistice Day, so that acts of remembrance could continue without affecting the war effort. After 1945, the occurrence of a remembrance event on a Sunday was formalised, and Remembrance Sunday has been observed ever since, in addition to the remembrance services which take place on Armistice Day itself. The Cenotaph, inscribed with the words ‘The Glorious Dead‘, stands as a memorial to the fallen of all wars and conflicts since the First World War.