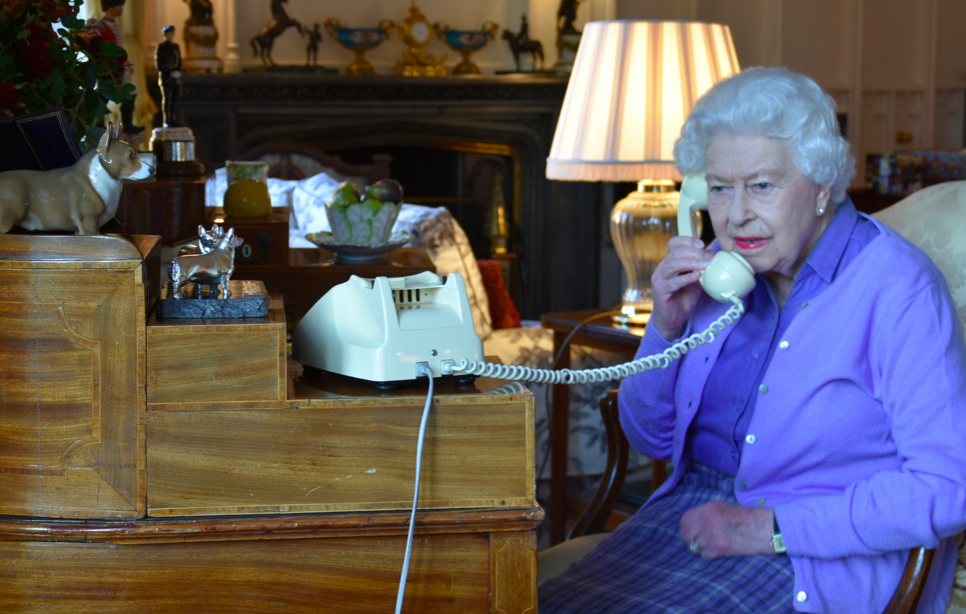 It’s a photo for a moment in time and with its own place in the history books. The image of The Queen taking her weekly audience with the Prime Minister by phone is a record of an extraordinary time, and it’s set in very ordinary circumstances. From the cardie to the corgis, from the desk to the dust magnet ornaments, there is plenty to take from this special image. Here are five reasons to keep on enjoying an historic royal photo.

The phone that time forgot

Where did she get the Bakelite? Given The Queen’s famously thrifty nature, that phone is more likely to have been ringing the changes at Windsor Castle for decades than have come from an on-trend vintage homeware retailer as a retro touch but you never know. What is certain is that anyone with a stock of them will make a fortune once we’re all back out and buying again because it is now the must-have home accessory of 2020.

Every family everywhere has a piece of furniture like this. It kind of fits the room but really, actually doesn’t and while it’s useful it’s never been as beautiful as it should be and no one really cares about it other than as a store for other things they’ve had for years. In fact, it has the air of something rustled up from a flat pack. I’m rather taken with the idea of The Queen and the Duke of Edinburgh spending a Saturday afternoon in the Seventies rowing over which is end A and which is part B before shoving it together and never putting anything heavy on the end with the missing nail.

Hands up whose nan hasn’t got ornaments like this in her front room? I can almost smell the tea and digestive biscuits on a tray by the TV. Yes, The Queen does what every single one of us does as we get older, she starts filling up every available space with sentimental nicknacks. And plenty of them, that mantelpiece will take weeks to dust. Even if you didn’t know she’d been obsessed with dogs and horses since childhood, one look at her front room furnishings would tell you everything.

It’s another staple of many British households – a strange bowl filled, awkwardly, with random fruit. You just know from looking at it that it’s balanced so precariously that if anyone tries to take an apple the whole lot will fall over and someone will end up under the sofa trying to retrieve a satsuma.

Royal ladies of the world, stand back, the contest is over. We have the outfit of the year right here and there’s nothing you can do to change that. The Queen in her blue cardigan, carrying on as normal in the midst of a crisis, is already the winner. That cardie says much more than wash at 40 degrees and allow to air dry. It’s a moment of ordinary, a nod to a changed reality and a promise of certainty. The Queen knows just how to reassure and her knitwear, like her surroundings, is part of the image she knows many need to see right now. It’s another reason to love a photo that is already iconic.