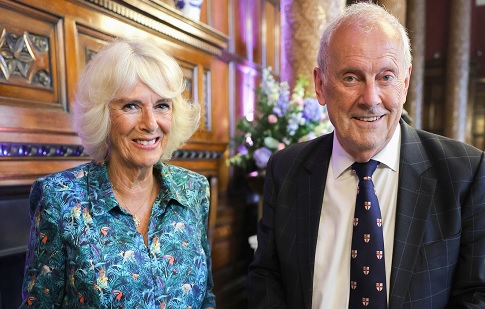 The Duchess of Cornwall might be turning 75 soon, but she encouraged the older generation to remember there’s still “a snap in our celery” at the annual Oldie Lunch in London.

Hosted by the Oldie Magazine and Gyles Brandreth at the National Liberal Club, the lunch recognised the contributions of those in their seventies and beyond, and Camilla attended in honour of her upcoming 75th birthday on 17 July.

In a speech, the Duchess praised two members of the Royal Family as shining examples for the older generation: her mother-in-law, The Queen, and her late father-in-law, Prince Philip.

“The Duke of Edinburgh’s philosophy was clear: ‘Look up and look out, say less, do more – and get on with the job’  – and that is just what I intend to do,” the Duchess of Cornwall said.

“Both he and Her Majesty have always been the very touchstone of what it truly means to ‘get on with the job,’ and an inspiration to each one of us here to do the same, whatever our age.”

She asked members of the audience — who included those in the fields of sports, entertainment, philanthropy, the arts, and science — to “keep writing those books and poems, painting those pictures, making those films, making those jokes, supporting those charities, and giving service in the way that you do.”

The Duchess helped to cut a white, blue and yellow birthday cake decorated with a royal crest along with some of her favourite things: books, gardening tools, and two mini likenesses of her dogs, Beth and Bluebell.

Camilla also heard a poem written for the occasion of her 75th birthday by English poet Roger McGough. Called “The Living Proof,” the poem reads, in part:

Speaking as somebody who knows a thing or two
about having been your age, let me say this:
You have reached a watershed, celebrate the fact.
Water is good for you and everybody loves sheds.

Yours are the days ma’am, with the promise
of many more ahead. So carpe diem,
but gently, for that way they last longer
And don’t count them, just be grateful.