The wedding uniform of the Duke of Cambridge 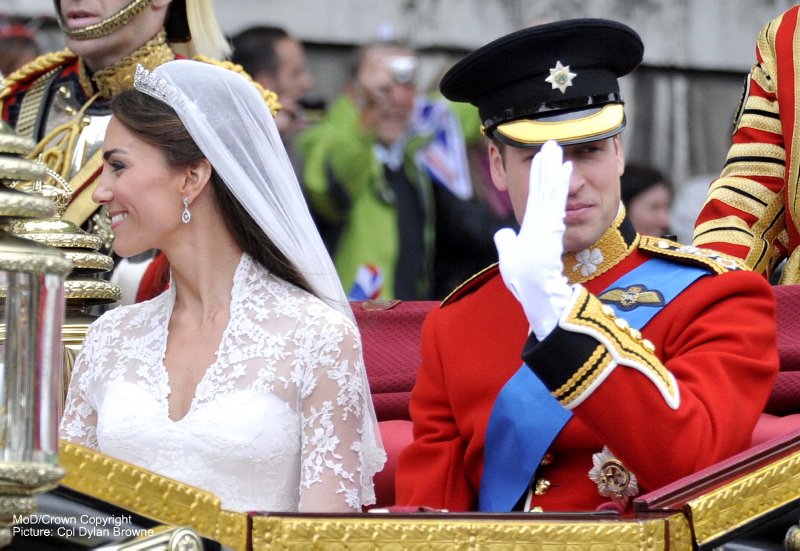 The Duke of Cambridge certainly stood out on his wedding day, wearing the Irish Guards Mounted Officer’s uniform in honour of his then-new honorary appointment as Colonel of the Irish Guards.

Prior to the wedding, The Telegraph spoke to servicemembers to see how they felt about William’s choice of uniform. An unnamed Foot Guards officer said: “The Irish Guards have just returned from a pretty tough tour of Helmand so they are immensely pleased that they will be represented” though they “would not like this to be at the detriment of anyone else,” meaning at the expense of the other branches William served in—the Royal Air Force or the Household Cavalry.

A St. James’s Palace spokesperson said that William’s uniform decision came down to a hierarchical decision: his colonelship with the Irish Guards was his highest-ranking appointment. “If he had not gone for that he would have had to have chosen between his RAF and Household Cavalry uniforms and because he is a similar rank in both of those, it would have been quite a difficult decision.”

On the official royal wedding website, more details were released about William’s wedding uniform. He wore the uniform in Guard of Honour Order and a Forage Cap.

Further details of his uniform include: “a gold and crimson sash, and gold sword slings, both of which are worn in the presence of a Member of the Royal Family,” though he did not wear a sword.

William also wore a Garter Sash—he became a Member of the Order of the Garter in 2008—and a Garter Star along with the Wings of the Royal Air Force and his Golden Jubilee Medal, awarded to him in 2002.

But perhaps the most noticeable aspect of William’s uniform was the scarlet tunic, in Guards’ Red. The buttons on the tunic were arranged in a special order, significant to the Irish Guards: they denote “the Irish Guards’ position in the Order of Battle as the Fourth Regiment of Foot Guards,” and all feature the Harp of Ireland surmounted by the Crown Imperial.

On Prince William’s Forage Cap is the Star of the Most Illustrious Order of St. Patrick—an eight-point star—and the motto of the Irish Guards, ‘Quis Separabit?’ which means ‘Who Shall Separate Us?’

William would reveal later, in an interview with Robert Hardman for a book about The Queen, that he’d wanted to choose his own uniform for his wedding, but his grandmother put her foot down and insisted on the Irish Guards’ uniform.

“I was given a categorical, ‘No, you’ll wear this!’” Prince William told Hardman. He continued, “But I knew perfectly well that it was for the best. That ‘no’ is a very good ‘no.’ So you just do as you’re told!”

William’s uniform was created from scratch by Russell Kashket, a tailor who specialises in military dressing and has worked with the Royal Household for decades. After the wedding, he gave an interview to The Telegraph saying that he worked with William to ensure that he wouldn’t be bothered by the heat at Westminster Abbey.

“He was very concerned about the heat because he knew all the cameras and lights would make it very hot in the Abbey,” Kashket said.

“We worked together to get the look he wanted while using material to absorb the heat and make sure he didn’t pass out in front of two billion people across the world.”

He also revealed that he worked so closely with William and Kate—he said he was visiting them at home at least once a week—that “we sat and had coffee and biscuits… She was lovely and gave more input than people realise.”

Kashket attended the royal wedding with his father and wife and said of his experience working with William: “I thought William looked great. I was very pleased to be part of the biggest day this country has seen for many years.”