The Duchess of Cambridge discusses importance of Remembrance 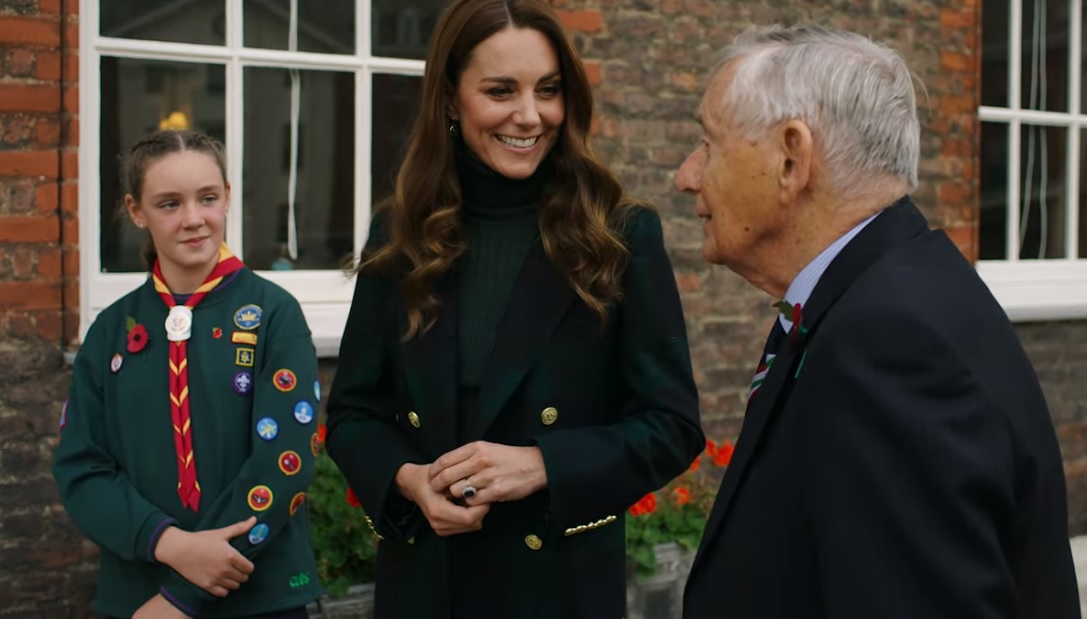 To mark Remembrance and 100 years of the Royal British Legion, the Duchess of Cambridge sat down to discuss the importance of Remembrance across generations young and old.

The Duchess sat down with 98-year-old veteran, Colonel Blum, and 10-year-old Cub Scout, Emily, to highlight the importance of sharing veterans’ stories with younger generations. During the talk, Colonel Blum said he had been to the Royal Military Academy Sandhurst to be commissioned as an army officer. Admitting it ‘had its moments, the Duchess touched on her husband’s time at the same Academy: “It was probably a lot tougher than that when my husband did it, but I’ve heard a lot about it.”

The Duchess also asked what Remembrance meant to Colonel Blum who served in Italy during World War Two to which he shared his personal ties to the war and his fellow soldiers: “I lost a few friends — one in particular, I remember he was killed a day or two before the war ended. That, I must say, affected me quite a bit.”

Emily, who spoke about learning about children in wartime and how scouts helped young evacuees also shared what Remembrance meant to her: “It’s important to remember all the servicemen and women who sacrificed their lives so we can live freely and happily today.

“We wear poppies to symbolize the poppies that were growing in the fields after the war that ended and to remember the people who lost their lives for us.”

During their time, Emily taught the Duchess and Colonel Blum how to make their own poppy, which the Duchess suggested Blum could put on his mantelpiece. Emily also asked her own questions including what the most important skill Blum learned as a scout to which he answered, making porridge. The Duchess laughed in response adding: “An important life skill! You probably ate a lot of porridge.”

Towards the end of the conversation, Emily was awarded a new Scouts’ Centenary Remembrance Badge, an initiative led by the Duchess that can be awarded to all those who take a meaningful part in Remembrance activities.

The Duchess, who is Joint-President of the Scouts hosted the conversations as scouts take part in different activities to commemorate the centenary of the Royal British Legion. The Duchess will be alongside Her Majesty The Queen on Remembrance Sunday as their join other senior members of the Royal Family at the Centopath to honor the fallen.