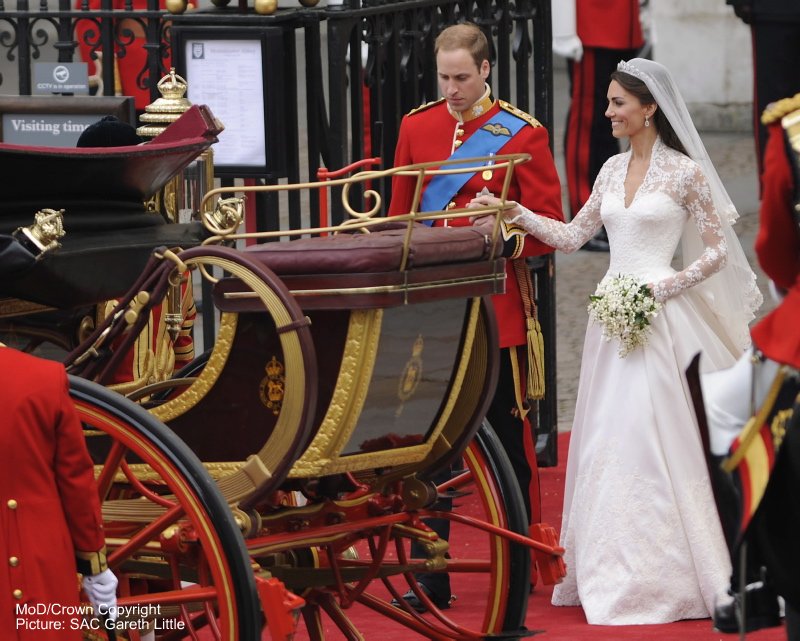 All brides need a bouquet and a royal bride is no different.  Flowers are as much a part of a wedding as the dress, the cake and the first kiss so as the countdown to the first Royal Wedding of 2018 hits its stride, Royal Central will be looking back at the bouquets borne by the brides of the House of Windsor. We start with the flowers carried by Catherine Middleton on April 29th 2011 as she walked into Westminster Abbey for her own royal wedding.

The Duchess of Cambridge’s bouquet was small, neat and made of locally grown flowers, all of them white. It was laced with green leaves and wired into a shield shape that kept its form throughout the day.

The dominant flower in the bouquet is lily of the valley. This highly scented plant usually blooms as May gets underway, and it’s been a wedding favourite for years (in fact, this bouquet has been compared many times with the one carried by Princess Grace of Monaco which was also largely composed of lily of the valley).

The bride gave a nod to her groom in her bouquet, adding in Sweet William, that favourite flower found in many gardens. The Duchess of Cambridge’s posy also included ivy and hyacinth as well as a very traditional royal bloom indeed. For nestling among all those flowers was a sprig of myrtle taken from a bush planted at Osborne House by Queen Victoria. Royal brides have included this in their bouquets since the 19th century in a tradition that has stood the test of time.

Much was made at the time of the language of flowers used by the Duchess of Cambridge in her wedding bouquet. As you would expect from a wedding bouquet, love features heavily. The ivy symbolizes wedded love and the hyacinths mean constancy of love. The myrtle, that royal wedding bouquet staple, is the emblem of marriage. Sweet William denotes gallantry while lily of the valley stands for ‘a return to happiness’.

The flowers carried by the Duchess of Cambridge had one final part to play in this royal wedding. Once the celebrations were over, the bouquet was returned to Westminster Abbey where it was placed on the Tomb of the Unknown Soldier. It’s a tradition that was started almost a century ago when the Queen Mother, then Lady Elizabeth Bowes-Lyon, put her own wedding flowers on the tomb on the way into her royal wedding on April 26th 1923. She had lost a brother, Fergus, in World War One and laid her bouquet there to remember him and all those who died in that conflict. All senior royal brides since have followed suit and in May we can expect Meghan Markle’s flowers to be laid there, too, in remembrance.

Back to the Duchess of Cambridge’s flowers. Truth be told, this bouquet divided opinion – some thought it was the perfect foil to her famous lace-covered dress while critics thought it too small and hard to make out in the majesty of Westminster Abbey. But it became as famous a part of her wedding look as the gown, the veil and the tiara as well as being a very symbolic start to married life.