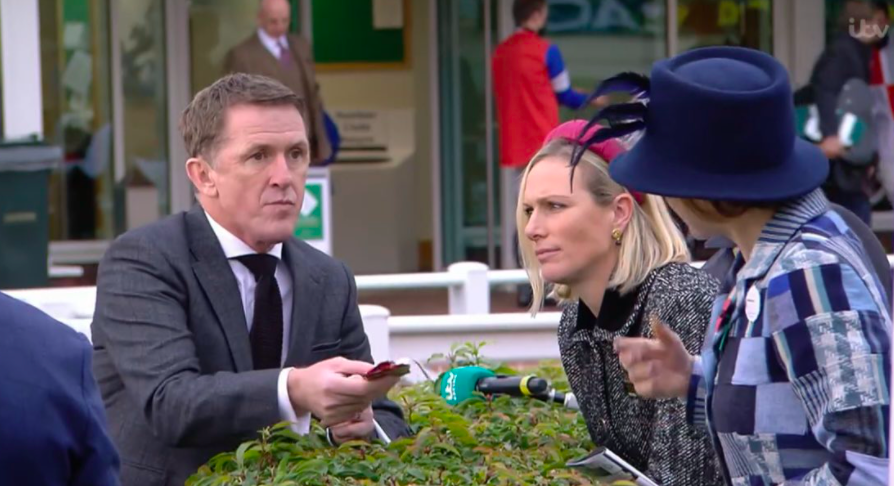 The Queen’s granddaughter, Zara Tindall, was in high spirits over the weekend as she enjoyed a thrilling few days of racing at Cheltenham Racecourse.

Zara attended both the Friday and Saturday of Cheltenham’s November meeting, with Sunday’s action still to come.

Dressed in a black tweed coat and a pink headband, Zara could be seen in the parade ring ahead of the day’s races taking a close inspection of the horses.

During a break in proceedings, Zara could been seen chatting to former national hunt jockeys Sir Tony McCoy and Mick Fitzgerald.

Sir Tony and Fitzgerald both offered the 40-year-old royal some Maltesers chocolate – an offer she couldn’t refuse.

Following in the footsteps of both her mother and grandmother, Zara is a huge advocate of horse racing.

Whereas The Queen tends to prefer flat racing, Zara is known to have a preference for National Hunt racing where horses compete over jumps.

Zara has owned, bred and pre-trained several racehorses over the years, including the Grand National placed Monbeg Dude.

Princess Anne’s daughter was appointed as a Director of Cheltenham Racecourse back in January 2020 and has attended most major meetings since.

Upon her appointment to the role last year, Zara said: “I’m passionate about horse racing, particularly on the Jumps side, and the absolute pinnacle of that is Cheltenham.

“Racing is simply the most exciting sport and it’s open to all.”