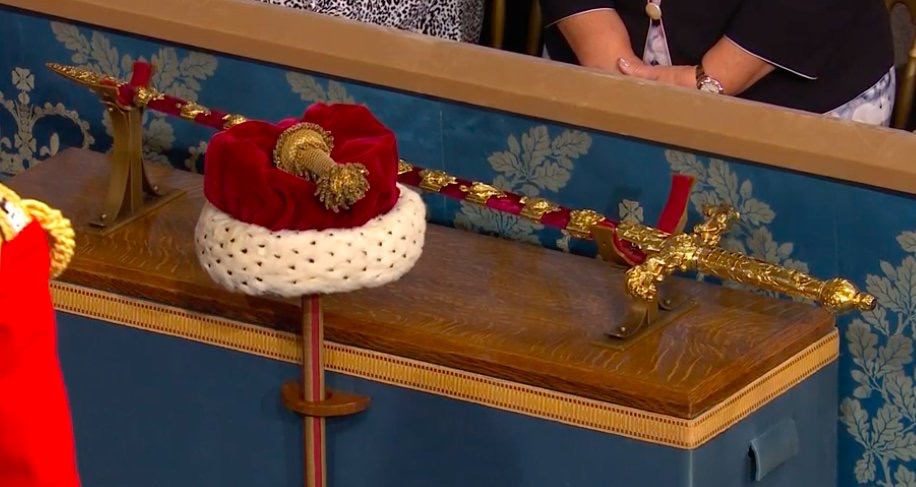 People all over the world will be familiar with the Imperial State Crown and all that it represents. With almost 3,000 precious stones making up the headpiece, it is only seen at State Openings of Parliament and Coronations of the Monarch.

But what about the other two items of royal insignia which are also only present at the most regal of events?

The Great Sword of State and the Cap of Maintenance are insignias of the Sovereign and represent the authority of the monarchy.

At the State Opening of Parliament, the Sword of State is carried by Lord Houghton, the former Chief of the Defence Staff.

The Great Sword is one of the most significant items of regalia in The Crown Jewels.

According to The Royal Family’s website, the Sword symbolises the Sovereign’s Royal authority.

The Sword of State was first seen at the lavish Coronation of James II in 1685. Along with the coronation regalia, the Sword was presented to the King and Queen as they entered Westminster Hall.

Ever since, the item has been an integral part of the pomp and ceremony of the United Kingdom.

The Lord Privy Seal, Baroness Evans, carries the Cap of Maintenance directly in front of The Queen during the State Opening.

The Cap of Maintenance was traditionally gifted to the monarch by the Pope.

If the Pope awarded a monarch with a Cap, it was seen as an endorsement and special privilege.

A Cap of Maintenance was first gifted to both Henry VII and Henry VIII during their respective reigns.

The Kings were so pleased to have received this special privilege from The Vatican, they paraded the Cap on a stick around the City of London to solidify the monarch’s authority.

At coronations, Kings of the past, including The Queen’s father George VI, have worn the Cap of Maintenance for the journey to Westminster Abbey immediately prior to the service.