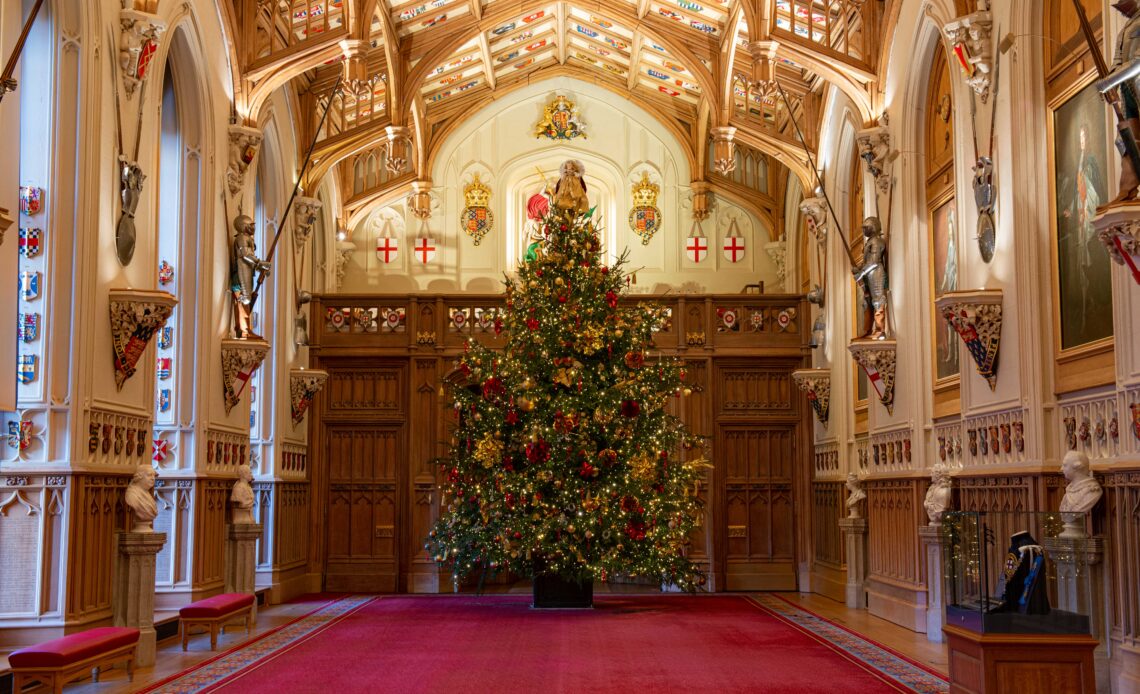 Windsor Castle is ready to celebrate the holidays. The Christmas decorations are up and visitors will be able to see the State Apartments transformed with shimmering Christmas trees, twinkling lights, and festive garlands.

In addition to the State Apartments, on special display this year and now open, it’s the first time costumes worn by Her Majesty The Queen and Princess Margaret as teenagers during wartime pantomimes will be on display. The costumes are on view in the Waterloo Chamber where the pantomimes were originally performed 80 years ago. Between 1941 and 1944, the Princesses’ performed in their own versions of Aladdin (1943) and Old Mother Red Riding Boots (1944.) The pantomimes were used to raise money for the Royal Household Wool Fund – a fund that supplied knitting wool to make comforters for soldiers on the front lines.

On the evenings of the 4th,11th,18th, 20th, and 23rd December, families can drop in for festive storytelling sessions in the State Apartments. Taking inspiration from the pantomime costumes on display, children can design their own costumes in the Castle’s Learning Centre, make pantomime-themed Christmas decorations, and they can even make a stage to perform their pantomime characters on.

Also on display at Windsor, the Semi-State rooms, the private apartments for George IV, and now used by members of the Royal Family for official entertaining, will be open for visitors along with a spectacular Christmas tree in the Crimson Drawing Room.

As the holiday season wraps up, Great Kitchen Tours will be available from 30 December to 9 January, offering a chance to explore the oldest working kitchen in the country which is not usually open to the public. Built during the reign of Edward III, the Great Kitchen has remained in use for more than 750 years and is still used today for State occasions hosted by The Queen.