This illustrated map shows every royal residence in the UK 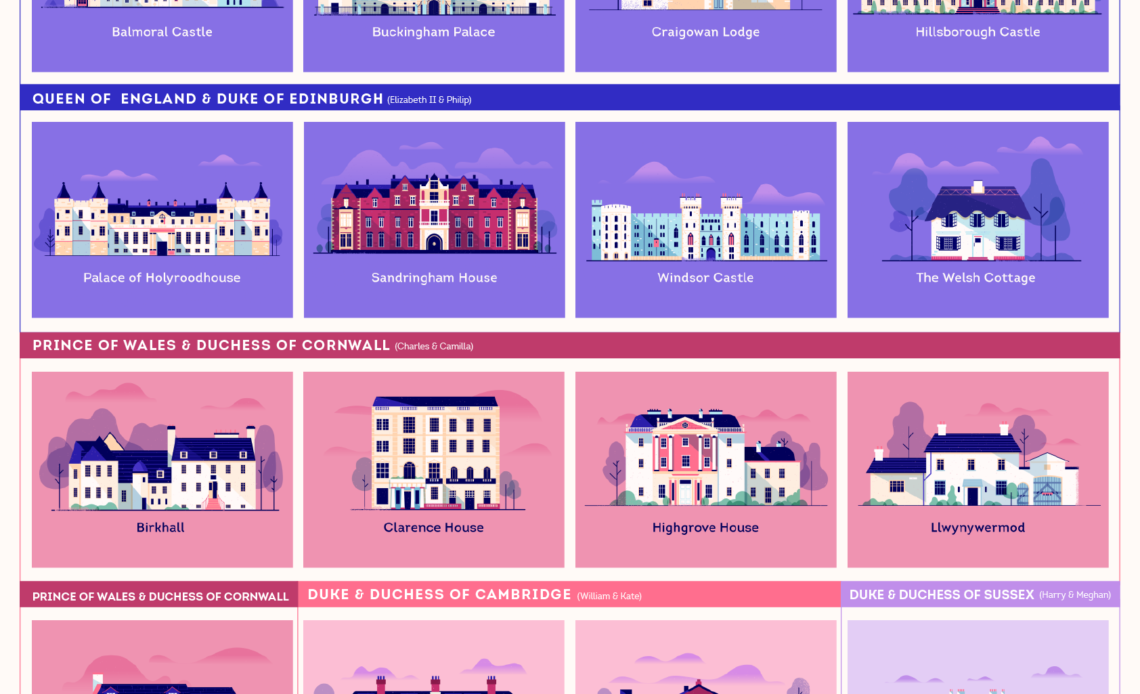 When thinking about royal residences, usually Buckingham Palace, Windsor Castle, Kensington Palace, and maybe Balmoral Castle come to mind. But the British royal family actually occupy 20 properties around the UK, ranging from castles to quaint cottages – and one you can even hire for your own getaway.

Whether they’re in Wales, Northern Ireland, Scotland, or good old England, The Queen and her family need somewhere to stay on their travels. So where are all of these buildings located?

Quid Corner has created a map displaying all of the royal residences along with illustrations of each home.

The Crown Estate owns some of the properties, but others, like Balmoral Castle and Sandringham House, are privately owned. The residences belonging to The Crown Estate, such as Buckingham Palace, belong to the current monarch, but only whilst he/she reigns. The Queen doesn’t have the right to sell them, but she receives 25 percent of their revenue to fund her activities and also to pay for things like renovations at the various properties.

Let’s take a look at a few of the lesser-known royal residences on the map.

Hillsborough Castle is the official residence of The Queen and her family when they visit Northern Ireland, but it’s also home of the Secretary of State for Northern Ireland. Owned by The Crown Estate, the word ‘castle’ is a bit misleading for this residence as it was built in the late 18th century ‘Irish Big House’ style (think mansion versus a proper castle). The property was the home of the Marquess of Downshire and is located in County Down, Northern Ireland. If you’re visiting the area, the castle is operated by Historic Royal Palaces so you can tour it for yourself, including 100 acres of gardens.

Near the village of Bagshot in Surrey (and not too far from Windsor Castle) sits Bagshot Park, home to the Earl and Countess of Wessex. The 120-room Tudor Gothic-style home is owned by the Crown and was completed in 1879 as the primary residence of Queen Victoria’s son, Prince Arthur. With its proximity to Windsor, it’s the perfect place for Granny to pay weekend visits to the Wessex family, but unfortunately, the rest of us can’t pop in for tea as it’s not open to the public.

You probably can’t pronounce it, and there’s a good chance you haven’t heard of this royal residence, either. Llwynywermod is the private Welsh home of the Prince of Wales and the Duchess of Cornwall, located in Carmarthenshire. It was purchased by the couple in 2007 through The Duchy of Cornwall, refurbished by local Welsh craftsmen and contractors, and decorated using Welsh textiles. Fun fact: the original building is in ruins, but the first owner of Llwynywermod was related to Anne Boleyn.

If you’ve ever wanted to spend the night in a royal palace, you’re in luck (well, mostly). Although it’s a cottage and not quite a palace, Prince Charles’s official residence on the Isles of Scilly is actually available for holidaymakers to rent when he’s not in town.

The Duchy of Cornwall owns the seaside property, which was built in the 1960s and surrounded by flowering trees. It features gorgeous views, five bedrooms, a hot tub, garden, and BBQ, and is just steps away from Lusty Glaze Beach.