The Wedding Cake of Queen Victoria and Prince Albert 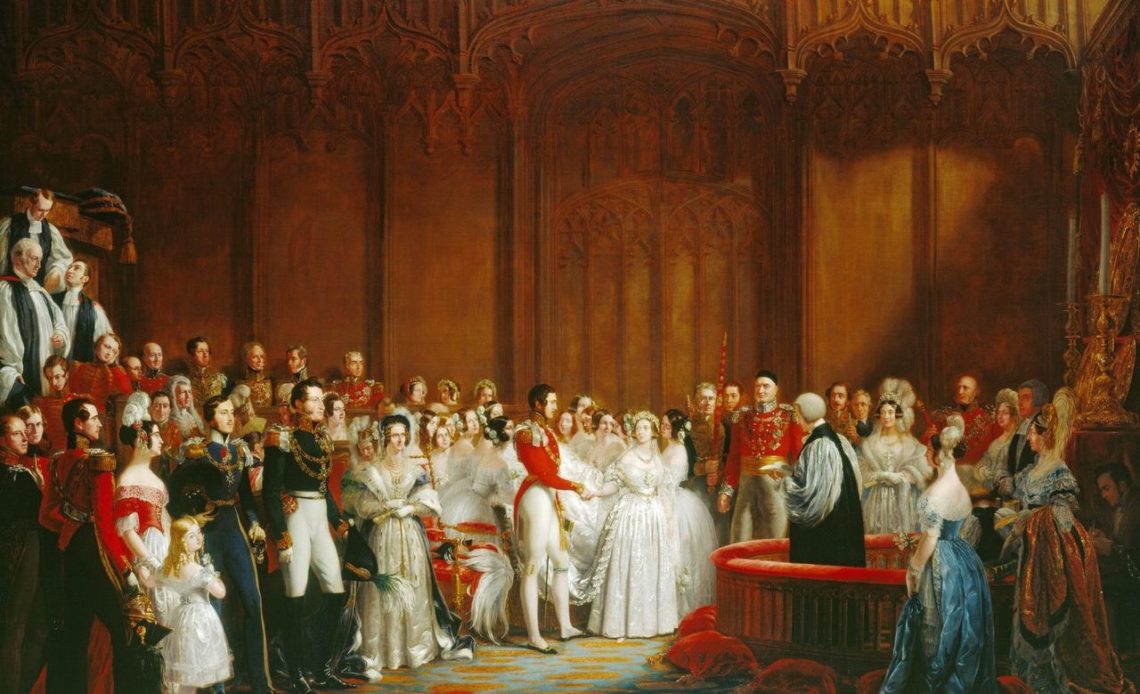 When the newly-married Queen Victoria returned with Prince Albert to Buckingham Palace, she was with the Prince ‘from 10m. to 2 till 20 m.p.2’, after which the couple went down for the wedding breakfast. During these thirty minutes, Queen Victoria gave Prince Albert his own wedding ring (Elizabeth Longford, Queen Victoria, 152). At this wedding breakfast was the royal cake. This cake, unlike the many glorious iced creations made for the weddings of her children and grandchildren, was not photographed, because the royal wedding in 1840 antedated even the earliest version of photography, the daguerreotype. Consequently, we must rely on accounts, descriptions and artworks to reconstruct how this cake looked.

A hand-coloured lithograph, ‘Royal Wedding Cake, Her Most Gracious Majesty Queen Victoria and His Royal Highness Prince Albert, Married February 10 1840’, shows the circular cake, which was decorated with orange blossom in imitation of the Queen’s simple bridal wreath and was sprigged with myrtle. It weighed an impressive 300 pounds, was around three yards in circumference and some fourteen inches in depth. According to the lithograph, this particular cake cost over ‘L 100’.  More than one cake was made for the breakfast, because so many slices were distributed amongst the wedding guests. Sprigs of myrtle were apparently also given to the guests.

On the lithograph, Queen Victoria and Prince Albert may be seen on the top of the cake in classical Greek costume; their hands are joined, whilst Britannica blesses their union.  The figure of the crowned Queen is holding a sceptre, whilst beneath them sit a number of winged cupids bearing the royal arms of England, a happy augur of the nine royal babies that were to be born to them. One Cupid has a book open, into which has been entered, the happy date of the wedding. There are doves at the feet of the Queen to denote ‘felicity’ and Prince Albert and what is clearly a dog, probably Eos, the Prince’s beloved elegant greyhound who had come over with him from Coburg. According to the lithograph, the dog was to represent fidelity, so perhaps then, Eos was the living symbol of that.

This cake, somewhat heavily described in the lithograph as ‘ponderous and elegant’ was the creation of the Yeoman Confectioner at Buckingham Palace, Mr John Chichester Mawditt and drawn by W. B. Sarsfield Taylor, Curator of the Living Model Academy, on the Wedding Day itself. It was royally described as the ‘Queen’s own cake’. Mawditt later made the christening cake for the Prince of Wales in 1842, drawing on similar imagery, such as medallion portraits of Queen Victoria and Prince Albert in silver, silver princes’ feathers and sugar figures including that of a proud Britannia, holding the baby Prince (Annie Gray, The Greedy Queen, pp. 101-2).

I have checked Lord Esher’s typescripts of Queen Victoria’s journal for 10 February 1840, which survive for that day, alongside Princess Beatrice’s copies of her mother’s journals. There is no mention of the cake, although the wedding breakfast is described.

The contemporary weekly, The Mirror of Literature, Amusement and Instruction, later to become a monthly, was published by J. Limburd as a cultural magazine, beginning publication in 1822. Volume 35 covered January-June 1840 and there was a reproduction of the lithograph of the Royal Wedding Cake. It tells us additionally that the top of the Cake was covered in iced bouquets of white flowers with lovers’ knots of ‘white satin riband’, meant to be presents to the guests. What follows in The Mirror is an elaborate fairy tale concerning Mr Mawditt, entitled ‘Fairy Labours, or, the building of the Queen’s Bride-Cake’.

Remarkably, pieces of Queen Victoria’s wedding cake survive in the Royal Collection, distributed at the Wedding Breakfast at Buckingham Palace. The cardboard box in the Collection bears the royal crown and reads: ‘The Queen’s Bridal Cake, Buckingham Palace, Feby [sic] 10 1840’. But there is nothing Miss Haversham-esque about these pieces of wedding cake, only a poignancy perhaps, as they are a physical remnant of the day the Queen would remember as having been the ‘happiest’ of her life, a Queen whom the world often even now, first thinks of as a widow.