Which royals are buried at Canterbury Cathedral? 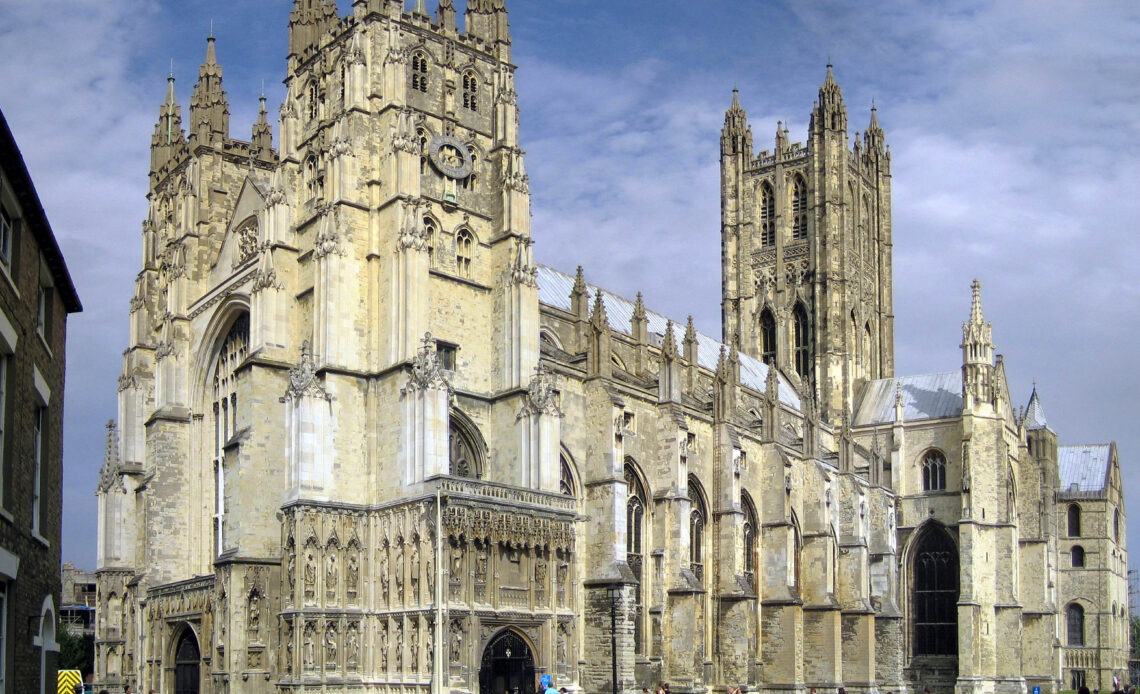 Canterbury Cathedral is the seat of the Archbishop of Canterbury, head of the Church of England and the mother church of the worldwide Anglican Communion. The present structure was built between 1070 and 1077 replacing an earlier structure that had been destroyed by fire. The Cathedral and the nearby St Augustine’s Abbey and St Martin’s Church which both date from the 6th century are a part of a UNESCO World Heritage site.

St Augustine arrived in Kent in 597 to bring the Christian faith to the Anglo-Saxons. He converted King Ethelbert of Kent who became the first Anglo-Saxon king to be baptised; his wife, Bertha, a Frankish princess, was already a Christian. Canterbury became the centre of the Christian Church as it grew throughout the Anglo-Saxon kingdoms. Cathedrals and abbies are the most common places to bury royals and three royals of note are buried in Canterbury Cathedral.

Edward was born in 1330 and died in 1376. He was the first son and heir of King Edward III. He would never become king as he died the year before his father and his 10 year old son became king instead as Richard II. Edward earned distinction as one of the most successful commanders of the 100 years war. In 1346 when aged 16 his father placed him in command of the vanguard at the Battle of Crecy.

His contemporaries remembered him as a model of chivalry and one of the greatest knights of his age. The French chroniclers, on the other hand, describe his brutalities and the massacres he ordered .He died of dysentery at the Palace of Westminster on June 8 1376 after a long period of ill health. He was buried at Canterbury Cathedral on September 29 1376.

Henry was born in 1367 and died in 1413. He was King of England from 1399 to 1413. He was the son of John of Gaunt, Duke of Lancaster who was the fourth son of King Edward III and younger brother to the Black Prince. When Henry’s father died in 1399, his cousin, King Richard II, would not allow him to inherit his father’s Duchy so Henry organized a rebellion against Richard, overthew him and imprisoned him. He was crowned King on 13 October, 1399 in Westminster Abbey. He made an address in English. He was the first monarch since the Norman conquest to use English rather than French as his main tongue.

Henry spent much of his reign defending himself against plots, rebellions and assassination attempts. His health was often poor suffering from an disfiguring skin condition. When he died he chose to be buried at Canterbury Cathedral rather than Westminster Abbey. It is thought he had a particular devotion to St Thomas Becket, the Archbishop of Canterbury murdered by King Henry II whose shrine was in the Cathedral. Henry IV died on March 20 1413 in the Jerusalem Chamber of the Abbot’s House at Westminster Abbey and his body conveyed to Canterbury for burial.

Joan of Navarre Queen of England

Joan was born in 1368 and died in1437. She became Duchess of Brittany through her first marriage to Duke John IV. After his death in 1399 she served as Regent of Brittany during the minority of her son. She married secondly in 1403 to King Henry IV after having surrendered the care of her son and Brittany to the Duke of Burgundy. She married Henry in Winchester Cathedral and then had a formal entry to London where she was crowned Queen.

She was described as beautiful, gracious and majestic but also but also greedy and stingy and was accused of accepting bribes. She reportedly did not have a favorable opinion of England and surrounded herself with her Breton courtiers until their expulsion by Parliament. She and Henry had no surviving children and he died in 1413. She spent the remainder of her life in England holding her own court in Nottingham Castle. She died on June 10 1437 and was buried next to Henry on August 11 1437.