The stories of Queen Victoria’s granddaughters: Princess Alix of Hesse, the last Tsarina

Before the Bolshevik Revolution in 1917 the Russian Empire was a Monarchy ruled over by the Tsar and his Consort. The last of these consorts was the wife of Tsar Nicholas II, Alexandra Feodorovna or, as she was known as a child, Princess Alix of Hesse and by Rhine.

Born on June 6 1872, Princess Alix Victoria Helena Louise Beatrice was the fourth daughter and sixth child of Princess Alice of the United Kingdom and Louis IV, Grand Duke of Hesse and by Rhine. Through her mother, who was the second daughter of Queen Victoria, Alix was the twenty sixth grandchild of The Queen and spent many holidays with her ‘Grandmamma’.

As a child, Alix was given the nickname of ‘Sunny’ by her parents, and led a carefree childhood with her siblings at their home in Darmstadt, Germany. But their happiness was not to last – when Alix was six, she contracted diphtheria, as did most of her family. Sadly, her mother and her younger sister, Marie, succumbed to the illness, and passed away in December 1878.

Following the death of their mother, Queen Victoria herself took a personal interest in the lives of Alix and her siblings including arranging their marriages. She proposed that Alix marry her first cousin, Prince Albert Victor of Wales (the older brother of the future King George V of England), but the young Princess turned him down in favour of another one of her cousins –  Tsarevich Nicholas. Nicholas was the heir to the throne of Russia and Alix had met him at the wedding of her older sister Elisabeth to his uncle, Grand Duke Sergei. Despite her misgivings about the relationship Queen Victoria allowed the courtship to go ahead out of fondness for her granddaughter, saying that she was proud of Alix for standing up to her. 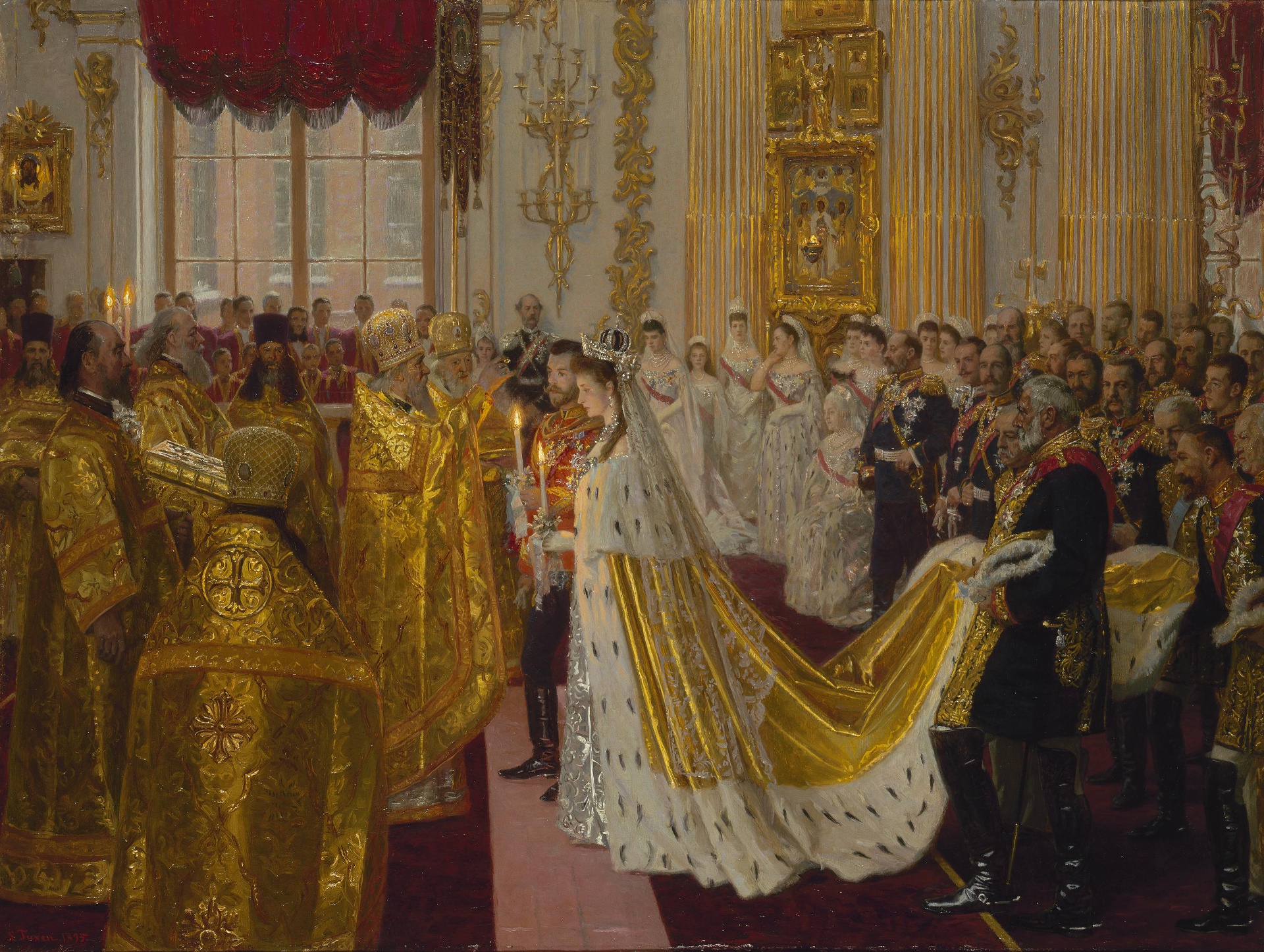 Princess Alix and Tsar Nicholas II at their wedding.

In 1894, at the wedding of Alix’s elder brother, the pair became engaged. At the end of that year Tsar Alexander III died leaving his son Nicholas the new Tsar of Russia and a few weeks later Alix, now known as Alexandra Feodorovna, and Nicholas were married in a splendid ceremony at the Winter Palace of St. Petersburg. Even though she was in mourning, Alix wore a white dress covered in jewels that was apparently so heavy that she needed help to kneel and stand. The marriage would prove to be a very happy one that would come to an extremely unhappy end a few years later.

Two years after her marriage, Alix was crowned inside the Kremlin in Moscow alongside her husband by which time the couple had a daughter, Olga. Another three girls followed – Tatiana, Maria and Anastasia – but it wasn’t until 1904 that Alix had the couple’s much awaited son, Tsarevich Alexei Nikolaevich. Unfortunately Alexei was born with heamophilia, a dreaded disease that had been passed onto him from his mother’s side of the family.

Alexei’s condition was devastating to Alix who blamed herself for his suffering. To make matters worse, she was fast becoming unpopular with the people of Russia, not only because she was perceived as haughty and curt, but because she was the cause of their heir’s illness. In a bid to cure her son, she consulted many physicians, including the mystical healer Grigori Rasputin. Rasputin was extremely unpopular with the masses, but Alexandra and Nicholas were reluctant to send him away because he had appeared to have saved their son’s life on multiple occasions. Alexandra especially became extremely reliant on Rasputin, giving him political favour in exchange for his treatment of the Tsarevich. According to some historians, this undermined the Tsar’s rule during the First World War and could have lead to the abolition of the monarchy altogether.

A portrait of Empress Alexandra Feodorovna painted later in her life.

In 1914, the First World War broke out, and Alexandra, who was of German descent, was accused of colluding with her brother Ernest, the new Grand Duke of Hesse and by Rhine. Meanwhile, Tsar Nicholas personally commanded the army, a move that would prove to be disastrous, as he was blamed for all the subsequent Russian losses. The severe winter of 1916 worsened the moods of the Russians who, by this point, were thoroughly fed up with their Imperial Family. By 1917 there were uprisings, forcing Nicholas to abdicate the throne. Nicholas, Alexandra, and their entire family were kept under house arrest in Alexander Palace.

In 1918, the family were moved to Ipatiev House in Yekaterinburg. Both Alexandra and Alexei took ill and neither could walk with Alexandra spending most of her time in a wheelchair. The Imperial Family lived a life of uncertainty and fear in Ipatiev House with almost no contact with the outside world.

On the 17th of July, Nicholas, Alexandra, their four daughters and their son were taken to the basement of their confinement and executed by a firing squad. Alexandra was forced to watch her husband being murdered, but was shot before her children. It was one of the most brutal executions in history and brought an end to the Romanov dynasty and their rule in Russia.

After the discovery of their bodies, Alexandra, Nicholas and three of their daughters were interred in the St. Catherine Chapel in St. Petersburg alongside the rest of the Imperial Family. In 2000 Tsar Nicholas II and Alexandra Feodorovna were canonised by the Russian Orthodox Church. Princess Alix of Hesse and by Rhine, granddaughter of the great Queen Empress, had become an empress herself but she paid a very heavy price for it.