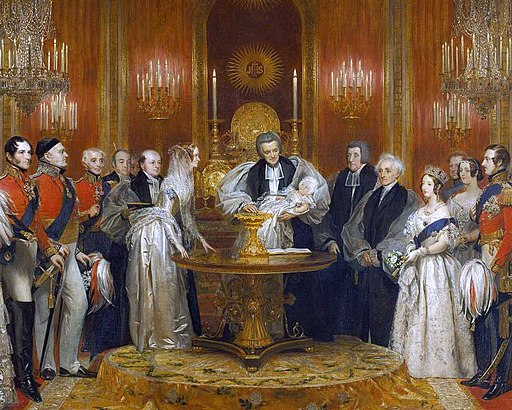 The Prince of Wales will return from his trip to the Middle East with bottles of water from the River Jordan, gifted to him during his stay and with a rather special place in the traditions of the House of Windsor. For royal babies have been christened with water taken from the place where Jesus is believed to have been baptised by John the Baptist for years. The water, sterilised and sealed in containers, is now ready for use in Windsor christenings to come. And it’s just one of several traditions that the Royal Family follow when their newest members are christened.

Royal babies now wear a replica of the famous Honiton lace christening gown, so associated with royal baptisms. This new version was commissioned by The Queen and made by Angela Kelly and her team as a copy of the famous original which was deemed too fragile to remain in use. James, Viscount Severn was the first baby to wear the new outfit at his christening in 2008. His big sister, Lady Louise Windsor, had been the last royal to wear the original gown.

That original was made in 1841 for the christening of Queen Victoria and Prince Albert’s first child. Their daughter, Victoria, was dressed in the gown with her proud mother declaring she looked ‘’very dear’’ in it. The christening outfit was made by Janet Sutherland using the same fabrics which Victoria had incorporated into her wedding dress the year before  – Spitalfields silk and Honiton lace.

The finished product, which would be used by over 60 royal babies in total, clearly left Victoria feeling amused as she gave its creator the title of ‘Embroiderer to the Queen’.

Another tradition begun by Queen Victoria and Prince Albert is the use of the Lily Font for royal christenings. The gilded silver font, which weighs in at 21 pounds, was commissioned by the royal couple ahead of the birth of their first baby. Back in 1840, there were concerns about associations of the font then in use for royals – it had been commissioned by Charles II whose children were all illegitimate.

Prince Albert contributed to the design of the font which was made by the London firm, Barnard and Co., who charged the princely sum of £189 9s and 4d for their work.  The bowl is a large, open lily and the font is decorated with more lilies, chosen as they represent purity. It’s also decorated with cherubs and representations of ivy.

The font is kept at the Tower of London but is brought to the location of the royal christenings when they take place.

Royal babies are usually christened with water brought from the River Jordan where Jesus was baptised by John the Baptist. In 2015, specially sterilised water was flown in for the baptism of Princess Charlotte.  The water is traditionally poured from a silver ewer made for the christening of the future King George III in 1735.

The baptism is usually carried out by one of the most senior clerics in the Church of England. The Prince of Wales, the Duke of Cambridge, the Duke of Sussex, Prince George, Princess Charlotte, Prince Louis and Archie Mountbatten-Windsor were all christened by the Archbishop of Canterbury of the time while the Queen’s baptism was performed by the then Archbishop of York.

The water from a holy place, brought back to the UK by the Prince of Wales, will no doubt be used at some point in the future for another royal christening.