The Royal Bridesmaid who became a Queen 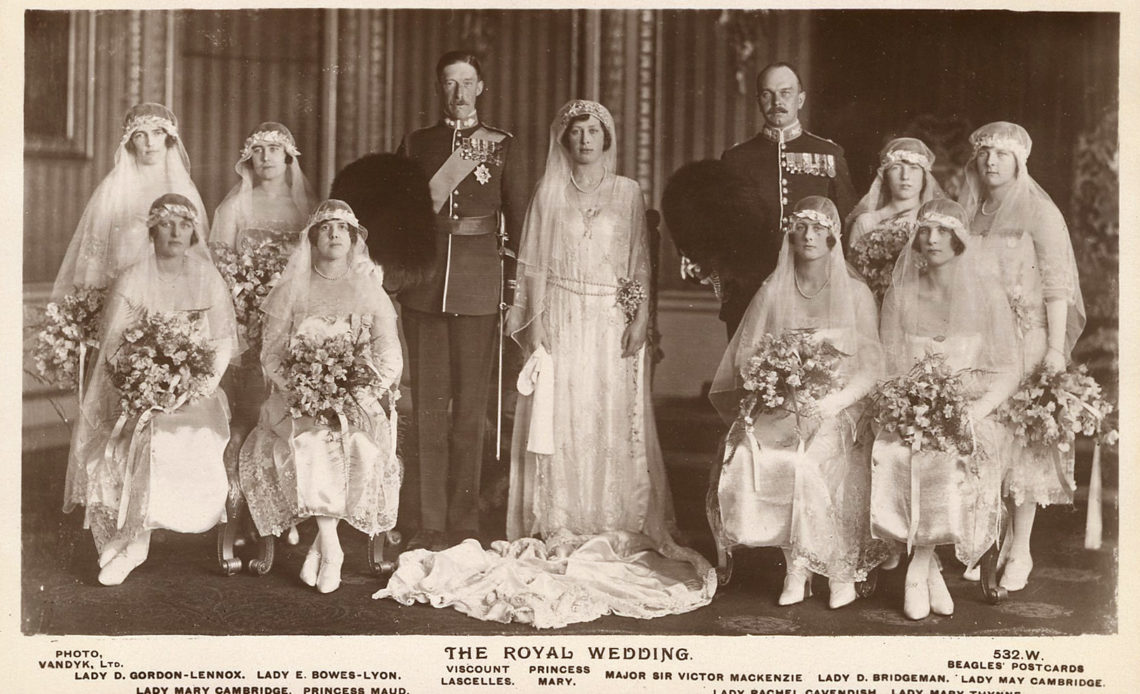 As 1922 got under way, newspapers began to run excited articles about a royal wedding. The only daughter of King George V and Queen Mary was about to say ‘I do’ and every moment of her marriage ceremony was up for scrutiny. Princess Mary’s wedding dress, choice of venue and honeymoon destination were pored over even if actual details were hard to come by (sound familiar?) but one thing the papers could confidently state in the days before her wedding were the names of her bridesmaids. And hidden among the usual list of peers’ daughters was a young woman who would go on to become a queen consort.

No one paid that much attention to the name of Lady Elizabeth Bowes-Lyon. She wasn’t the most important or best known of the young women who would accompany Princess Mary on her wedding day. A month before the wedding, The New York Times ran an article on the upcoming nuptials, popping her name at number six on a list of eight bridesmaids, adding the brief description of ‘youngest daughter of the Earl of Strathmore’.

Of course, in reality, Elizabeth’s relationship with the Royal Family was already more substantial than that one line indicated. She was a friend of the bride and a fascination of Mary’s older brother, Albert, who had first met her two years earlier and proposed within months only to be turned down. In the early autumn of 1921, he and Queen Mary had spent time with Elizabeth and her family at their Scottish retreat at Glamis Castle while George V knew enough about her to later remark that his his second son would be lucky to have her as his wife. But even if the papers knew of the growing relationship between Elizabeth and Bertie, they kept it to themselves in the weeks before the royal wedding. In the winter of 1922, she was just one of Mary’s bridesmaids.

And when the wedding day itself, February 22nd, dawned that meant a moment in the spotlight for all of them. Leading the list of attendants was Princess Maud of Fife, only daughter of Mary’s aunt, Princess Louise, the Princess Royal. Also among the group were two of Queen Mary’s nieces, Lady Mary Cambridge and Lady May Cambridge. The other four attendants were Lady Diana Bridgeman, Lady Mary Thynne, Lady Rachel Cavendish and Lady Doris Gordon-Lennox.

Their gowns featured a square neckline trimmed with lace with more lace decorating the end of their mid length sleeves. In line with the latest fashions, the bodices of the dresses had dropped waists and wide sashes that gave way to calf length skirts. The whole look mirrored the bride’s outfit with the women even wearing veils held in place by headdresses worn low on their foreheads in the style of the time.

They walked into Westminster Abbey behind Princess Mary as she became the first monarch’s daughter to wed at the ancient church in over 600 years. Her groom, Henry, Viscount Lascelles, waited at the altar, and during the ceremony, the bridal attendants stood around the couple as they made their vows. They later took their places in official photos that were splashed across the papers, still eager for all the news of this very royal wedding. And in the back row, next to the groom was Lady Elizabeth Bowes-Lyon.

Just over a year later, she would walk back into Westminster Abbey dressed in white but this time as the bride. Just weeks after her appearance as a royal bridesmaid, Bertie had proposed again only to experience a second rejection. However, in January 1923, he vowed to try one last time to persuade Elizabeth to be his wife and this time, she accepted him. Their marriage on April 26th 1923 turned her into Duchess of York and set her on the path to another trip to the Abbey. When Bertie’s brother, Edward VIII, abdicated in 1936, he became George VI and Elizabeth would go on to be crowned alongside him as his queen consort.

Mary, now Princess Royal herself, was on hand to watch her bridemaid’s elevation to the ultimate royal role. She remained close to her brother and sister in law, supporting them as they strengthened the House of Windsor after the shock of the abdication. Her own royal wedding had proved to be the first major appearance of Lady Elizabeth Bowes-Lyon alongside the Royal Family of which she would become such an integral part. The papers of 1922 had no way of knowing they were heralding the arrival of such an important royal player, the bridesmaid who finally accepted the proposal of a lovesick duke and ended up as queen consort.

There’s more on this famous royal wedding in Royal Central’s new book. Royal Weddings: A Collection is available on Amazon as a paperback or an ebook.