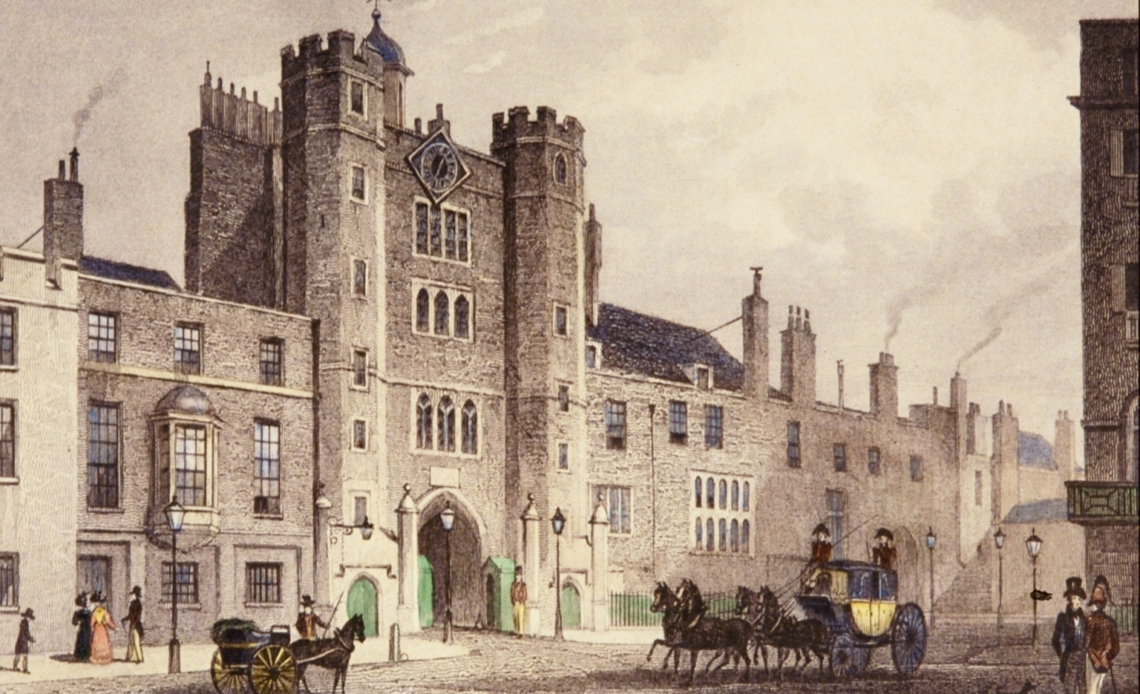 The Chapel Royal at St James’s Palace first and foremost is the name of the Chapel Royal, that establishment of the Royal Household intended to meet the spiritual needs of the Sovereign; the secondary term refers to the building itself – a royal peculiar – in which the monarch actually worshipped. The Chapel Royal is probably best remembered for the wedding of Queen Victoria and Prince Albert, which was celebrated there in 1840. The roots of its history, however, stretch back much further and continue to still grow today; it remains a popular choice for royal christenings as much now as did then, with the most recent being that of Prince George of Cambridge, in 2013.

St James’s Palace was built on the site of a leper hospital dedicated to St James the Less by Henry VIII, although little of the original Tudor palace remains now. In the seventeenth century, its setting was relatively ‘pastoral’ (Antonia Fraser, King Charles II, pp. 14-15) because it was isolated from Westminster and the sprawling complex of Whitehall, and close to the then rural St James’s Park, as it still is today. The Tudor-style north gatehouse of red-brick still bears a clock with the date of 1731; its daughter Chapel Royal is that at Hampton Court Palace. St James’s Palace remains the most senior palace of the British monarchy, to whose Court foreign ambassadors are still accredited.

Holbein executed the ceiling in the Chapel Royal. The heart of Henry VIII’s first child, Mary I, is believed to have been buried beneath the choir stalls of the Chapel Royal; that heart which had so passionately loved Philip of Spain and burned with Catholicism and upon which she commented sadly at the end of her reign, that the word ‘Calais’ would be found engraved, symbolically enough, given the fact that Mary I signed the Treaty surrendering Calais at St James’s Palace, in 1558.

Her half-sister Elizabeth I, by contrast, moved to St James’s Palace at the time of the Spanish Armada – that fleet sent by that same Philip, now Philip II of Spain – which had anchored off of Calais, whether the English followed, sending in their great fire-ships, aided by the ‘Protestant’ winds as they were later called, presumed to have been sent by an ‘English’ God, to vanquish the Spanish. In 1588, Elizabeth moved to St James’s Palace to remain more secure and set out from St James’s in her state barge to make her historic speech to her soldiers at Tilbury. It is at least possible that at this time she may have prayed in the Chapel Royal, during this period of national crisis.

Prince Charles of Wales – ‘the son of our love’, later Charles II – was born at St James’s Palace, in a bed hung with green satin, which cost nearly seven hundred pounds (Ibid, Pg 15). The eldest son of Charles I and his French-born Queen Henrietta Maria was baptised in the Chapel Royal at St James’s Palace by Archbishop Laud on 27 June 1630, for which the Lord Mayor London gave a silver font (Ibid, Pg 16). The second son of Charles I and Henrietta Maria, Prince James, Duke of York – the future James II – was born in 1633 at St James’s and also christened in the Chapel Royal. It would be at St James’s Palace, however, that Charles I would take heart-breaking farewell to his children, Princess Elizabeth and Prince Henry, Duke of Gloucester, on the last day of his life, the King having been brought to London from Windsor. On the bitter, icy morning of 30 January 1649 – described by Charles I as his ‘second Marriage-Day’ – he rose and was administered his last communion to a reading from the 27th Chapter of the Book of Matthew, by Archbishop Juxon. The King set out from St James’s in a mournful, drum-escorted procession to Whitehall, to his execution. Oliver Cromwell transformed St James’s Palace into a barracks during the period of the Commonwealth.

Some of the priceless silver-gilt altar plate at the Chapel Royal dates from the time of Charles II and James II, including two candlesticks bearing the monogram of James, when Duke of York. Prince James Francis Edward Stuart, ‘The Old Pretender’ and head of the later Jacobite cause, was born at St James’s Palace in 1688, in the famous ‘warming-pan’ incident, son of James II and his second wife, Mary of Modena.

Samuel Pepys correctly described the Chapel Royal of St James’s as the ‘King’s Chapel’ in his great Diary, making the important distinction between this chapel and the ‘Queen’s Chapel’, which had been begun for the first proposed bride of Charles I – the Spanish Infanta Maria Anna – but was instead used by his French-born Queen, Henrietta Maria, and then by two subsequent Stuart queens consort.

The wedding of Princess Anne, daughter of James, Duke of York and his first wife, Anne Hyde, married Prince George of Denmark in the Chapel Royal, St James’s, on 28 July 1683, a fitting choice for Princess Anne, who had been born there, like her sister Princess Mary – Mary II – in 1665.

The Chapel remained a popular choice for royal weddings for the new Hanoverian dynasty, not least for Queen Victoria; the marriage of George III and Charlotte of Mecklenburg-Strelitz was celebrated there on 8 September 1761 (six hours after Princess Charlotte’s arrival in Great Britain) as had been that of George III’s father, Frederick, Prince of Wales and Princess Augusta of Saxe-Gotha on 27 April 1736. George III’s son, George, Prince of Wales – later Prince Regent and King George IV – married Princess Caroline of Brunswick in the Chapel Royal on 8 April 1795. This was an ill-fated union which history would prove disastrous. George III sometimes attended services here, when in London.

Queen Victoria’s wedding to Prince Albert of Saxe-Coburg-Gotha (“the happiest day of my life!”) was celebrated at the Chapel Royal on 10 February 1840, a day which began with torrents of rain. The Queen was driven to St James’s Palace with her mother, the Duchess of Kent and the Duchess of Sutherland. She would have preferred a simple and private ceremony and greatly disliked the public nature of what was in fact, a small Chapel for such an important royal event. Queen Victoria was led up the aisle of the Chapel Royal by her uncle, the Duke of Sussex. Prince Albert wore the uniform of a British Field Marshal; the Queen wore a creamy white dress of Spitalfields satin, the wedding lace being superintended by a Miss Bidney in St James’s Street, Pall Mall (Kay Staniland, In Royal Fashion, Pg 121, 1997).

The crowded Chapel Royal was well captured in Sir George Hayter’s painting of Queen Victoria’s wedding, The Marriage of Queen Victoria, 10 February 1840. In it, the figures of the Prime Minister, Lord Melbourne as well as the Duchess of Kent and Queen Adelaide can be clearly seen. The darkness of that February morning in the Chapel contrasts deliberately with the white of the Queen’s wedding dress, whilst the red of Prince Albert’s uniform is paralleled in the red velvet altar cushions. The decoration of the Chapel Royal for the wedding cost about £9,000.

The eldest child of the Queen and Prince Albert, The Princess Royal, would also marry at the Chapel Royal, the only one of the Queen’s children to do so. Her wedding to Crown Prince Frederick William of Prussia occurred on 25 January 1858, with the Archbishop of Canterbury officiating the service. Predictably, the Queen reminisced about her own wedding eighteen years earlier, commenting with wistful nervousness: “I felt as if I were being married over again…” as she observed the touching sight of the Princess Royal “our darling flower… walking between her beloved father and dearest Uncle Leopold” (op. cit Christopher Hibbert, Queen Victoria: A Personal History, Pg 243, 2000). The marriage register was signed in the Throne Room, as Queen Victoria’s had been.

On 6 July 1893, another essential wedding would be celebrated in the Queen’s family – that of Prince George, Duke of York and Princess Mary of Teck, the future George V and Queen Mary. This time, though, the reflection was seen through black. The Queen, having now since been widowed for thirty-two years, watched her grandson, Prince George, standing where Prince Albert had stood, back in 1840. The ceremony was recorded, as Queen Victoria’s had been, but this time by the Danish artist Laurits Regner Tuxen, showing the daylight streaming through the large windows of the Chapel onto the royal couple, much as it had in the portrait of the Queen’s marriage by Hayter.

Lord Frederick Windsor and Lady Gabriella Windsor, the children of The Queen’s cousin, Prince Michael of Kent, were christened in the Chapel Royal, as was The Queen’s granddaughter, Princess Beatrice of York, in 1988 as well as her great grandsons, Prince George and Prince Louis. Princess Beatrice also plans to marry there.

The coffin of Diana, Princess of Wales, rested in the Chapel Royal prior to her funeral in Westminster Abbey in 1997; that of Queen Elizabeth The Queen Mother also rested in the nearby Queen’s Chapel before being taken to Westminster Hall to lie in state, in 2002.

The Chapel Royal continues to function as a living, working royal chapel; christenings, weddings and funerals of members of the Royal Household are also performed there.