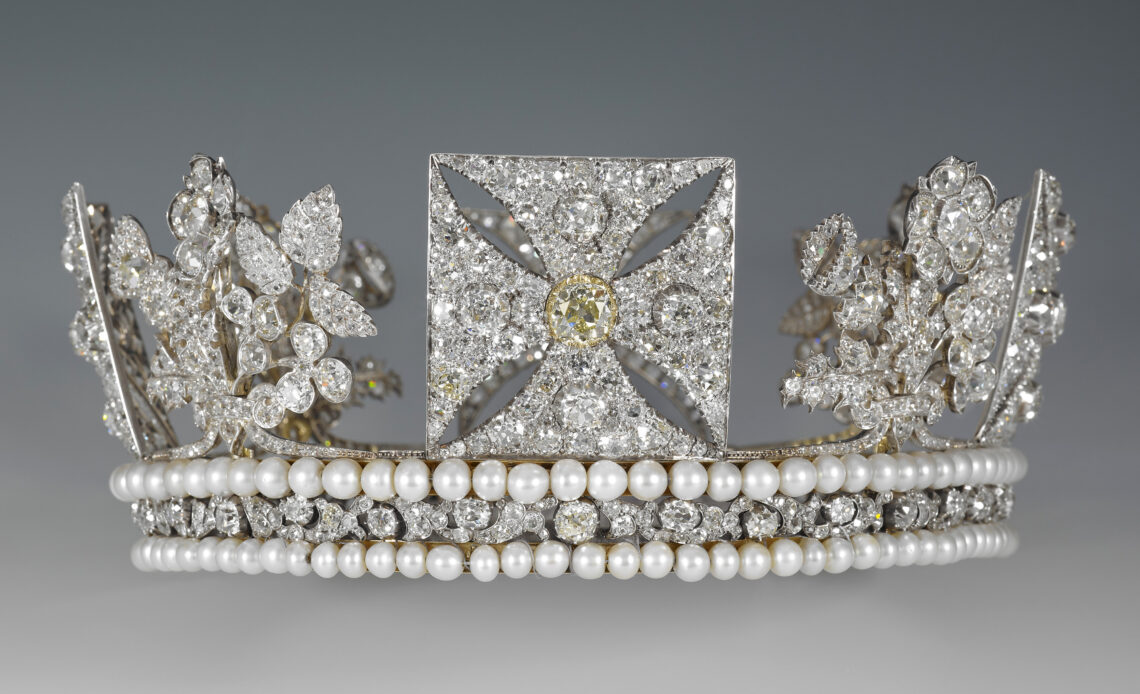 We are now getting a better idea of the star jewels from Her Majesty’s personal collection that will go on display this year in celebration of the Platinum Jubilee.

The jewels will be on display at Buckingham Palace, Windsor Castle, and the Palace of Holyroodhouse in Edinburgh. Each display will represent a historic occasion in The Queen’s 70-year reign – the Accession, the Coronation, and previous Jubilees. These occasions will be represented through paintings, works of art, items of The Queen’s dress and jewellery, and photographs.

In the State Rooms at Buckingham Palace, which will be part of the annual Summer Opening, visitors can see official portraits of Her Majesty taken by photographer Dorothy Wilding. The photographer took the photos used as the basis of The Queen’s postage stamps from 1953 to 1971. These photos were taken just weeks after the Accession and will be shown alongside items of jewellery worn for important sittings such as the Diamond Diadem, one of Her Majesty’s most widely recognised pieces of jewellery.

The Diadem was created for the coronation of George IV in 1821. Set with 1,333 brilliant-cut diamonds, it features two rows of pearls on either side of a row of diamonds. The diamonds are set in the form of a rose, a thistle, and two shamrocks, the national emblems of England, Scotland, and Ireland.

Inherited by Queen Victoria in 1837, she was known to wear it frequently in different photographs such as several early postage stamps. The Diadem was passed to Queen Alexandra, Queen Mary, Queen Elizabeth The Queen Mother, and then to Her Majesty. This item was worn on the day of her Coronation and has been worn to and from the State Opening of Parliament since the first year of her reign.

Those who visit Buckingham Palace will also get to see the famous Delhi Durbar necklace. The necklace features nine emeralds originally owned by Queen Mary’s grandmother, the Duchess of Cambridge. It features an 8.8-carat diamond pendant cut from the Cullinan diamond – the largest diamond ever found. The necklace was made for Queen Mary as part of a suite of jewellery created for the Delhi Durbar back in 1911. In 1953, Her Majesty inherited the necklace and wore it for an official sitting with Dorothy Wilding in 1956. That sitting is thought to have been their last together before Wilding’s retirement in 1958.

Over at Windsor Castle, the Coronation Dress and Robe of Estate worn by The Queen for her coronation on 2 June 1953 at Westminster Abbey will be on display. To recognise her role as Head of the Commonwealth Nations, The Queen asked for the emblems of several independent states, of which she is Monarch, to be incorporated into the dress’s design. Those emblems are embroidered in gold and silver thread and pastel-coloured silks, encrusted with seed pearls, crystals, and sequins.

The Queen is known to often wear brooches that represent the emblems of Commonwealth countries while she visits or meets with their representatives. Those brooches include the Canadian Maple-leaf Brooch, worn by The Queen (then Princess Elizabeth) on her first visit to Canada in 1951. The Flame-Lily brooch, the emblem of Zimbabwe will also be on display. It was that brooch that was pinned to The Queen’s mourning clothes when she returned to Britain from Kenya after the death of her father in 1952. Other brooches to be on display include the New Zealand Silver Fern Brooch, the Australian Wattle Brooch, and the Sri Lanka Brooch.

In Scotland at the Palace of Holyroodhouse, visitors will get to see a number of outfits worn by Her Majesty on occasions to celebrate the Silver, Golden, and Diamond Jubilees. This includes the outfit worn at the National Service of Thanksgiving at St Paul’s Cathedral on 7 June 1977. Marking the 25th anniversary of The Queen’s Accession, she wore a pink silk crêpe and chiffon dress and coat, along with a matching hat, known for its flowerheads that hang from silk stems.

Also on display for the first time ever will be Her Majesty’s Diamond Jubilee ensemble worn to the National Service of Thanksgiving at St Paul’s Cathedral. Also worn at a luncheon at Guildhall, City of London, this outfit was designed in 2012 by Angela Kelly, Personal Adviser to The Queen (Wardrobe.) The outfit consists of a pale turquoise dress and coat embroidered with scattered silver flowers. Of course, there is a coordinating hat to go along.

Alongside the ensembles, there will be a selection of gifts Her Majesty has received during official engagements in Scotland. There will also be a group of works related to her first official visit to Edinburgh in 1953 which happened soon after her Coronation. Those items include a silver model of a miner’s Davy lamp. It was presented in 1958 when The Queen made her first descent into a working coal mine on the opening of Rothes Colliery in Fife. The ceremonial key to the Palace presented to her at the start of Royal Week at the Palace each summer will also be on display.