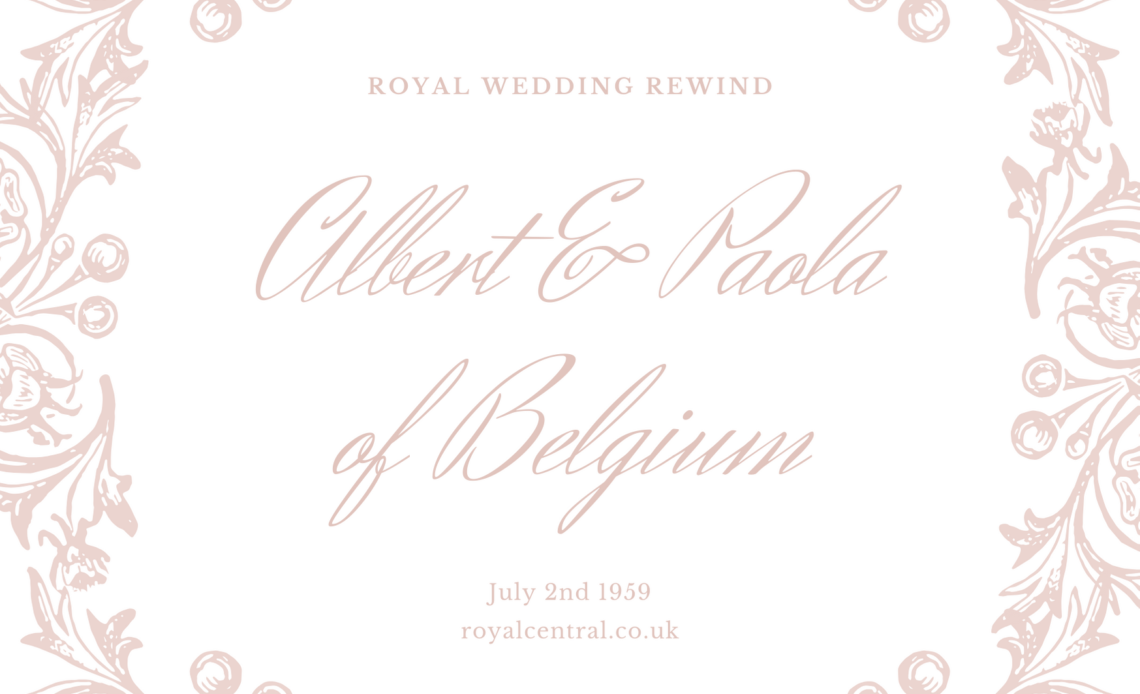 They were an unexpected king and queen and their royal romance has weathered several storms but today King Albert II and Queen Paola of Belgium will mark their sixty first wedding anniversary.  The couple, who married on July 2nd 1959 in Brussels, now live quietly following Albert’s abdication. Royal Central looks back at the wedding which would put a shy young couple on the path to a throne.

Their marriage became a very public celebration for a monarchy  in need of a boost. Albert had become heir to the throne in 1951 when his older brother, Baudouin, took power following the hastened abdication of their unpopular father, King Leopold III. Baudouin was proving popular and the controversies around the crown were beginning to settle as the 1950s came to an end. Albert went to Rome in November 1958 for the coronation of Pope John XXIII and at a reception during the celebrations, he met Paola Ruffo di Calabria. The couple fell in love and their engagement was announced in 1959.

Albert and Paola had wanted to marry in the Vatican City but pressure from the Belgian government saw their plans switch to Brussels. On July 2nd 1959 the bride, daughter of the late Fulco, Prince Ruffo di Calabria, was accompanied by her mother, Luisa, as she prepared for her royal wedding. Paola had a very special memento of her father’s family for her marriage as she wore a Brussels lace veil first used by her Belgian born paternal grandmother. It was secured with orange blossoms for the wedding celebrations which began with a civil ceremony at the Royal Palace in Brussels.

From there, the bride and groom moved on to their religious wedding which was held at the Cathedral of St Michel and St Gudula in Brussels. The royal wedding that the Belgian authorities had so wanted became a glittering reality as the couple made their way in a flower festooned car through large crowds who had turned out to cheer them. Their church ceremony was conducted by Cardinal Jozef-Ernest van Rooey who read out a message from Pope John XIII for the couple.

There were more large crowds to greet the newlyweds as they made their way back from their religious ceremony. The bride had chosen a simple dress of heavy white satin featuring three quarter length sleeves, a fitted waist adorned with a bow and a long full skirt with a five metre train. The wedding reception was held at Laeken while the couple headed to Spain for their honeymoon.

The couple would go on to have three children together and, by the 1970s, it was increasingly clear that Albert would remain heir to the throne. He became King of the Belgians on the unexpected and early death of his brother, Baudouin, on July 31st 1993. He ruled Belgium, with Paola at his side, until July 21st 2013 when he stepped down in favour of their eldest son, Philippe.

Both Albert and Paola have admitted that their marriage has been far from happy at times. In early 2020, Albert confirmed that he was the father of Delphine Boel, born in 1968 during his relationship with Sybille de Selys Longchamps. However, Albert and Paola continue to live together and are enjoying a quiet retirement.

Their royal wedding was never meant to be the start of a monarchical marriage but it ended up having a far greater impact than anyone could have expected at the time.