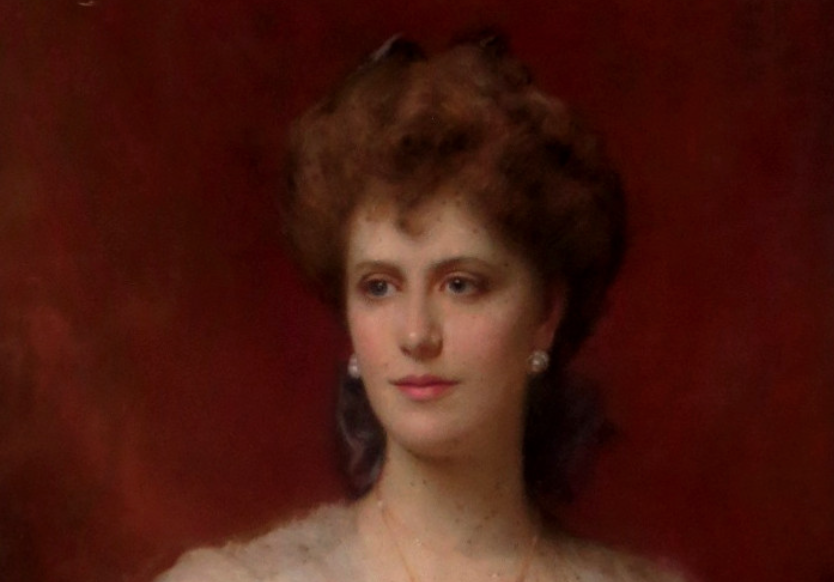 Born 29 April 1868, Alice Frederica Keppel (née Edmonstone) was a British society hostess and a long-time mistress and confidante of King Edward VII. Born in Woolwich Dockyard, Kent, Alice’s father was the Superintendent at the Dockyard and a retired admiral in the Royal Navy. Her grandfather was a former governor of the Ionian Islands.

The youngest of one brother and seven sisters, Alice grew up in Duntreath Castle, the home since the 14th century of the Edmonstone family, who were direct descendants of the Royal House of Stuart. The castle was a wedding gift from King Robert III of Scotland to his daughter, Mary Stewart, Princess of Scotland, when she married her fourth husband in 1425, Sir William Edmonstone of Culloden.

Alice married the Honourable Lt Col George Keppel, son of the 7th Earl of Albemarle, in 1891. He was four years older than Alice and served as a soldier in the British Army. The couple had two daughters, but George’s lack of money led to Alice engaging in affairs with richer men so they could keep their lifestyle of London society. Her first affair was with Ernest Beckett, 2nd Baron Grimthorpe. Alice’s husband once said of her affairs: “I do not mind what she does as long as she comes back to me in the end.”

Alice would become one of the best-known society hostesses of the Edwardian era. In 1898, the then 29-year-old met Edward, Prince of Wales (56-years-old at the time), the heir apparent to the British throne. Soon after, she became his mistress and regularly visited her. The relationship would last through his ascension to the throne in 1901 and until his death in 1910. Alice was known as one of the few people in his inner circle who was able to help smooth his mood swings.

Edward’s wife, Alexandra of Denmark, was actually quite fond of Alice and was tolerant of the liaison. She preferred Alice to Edward’s other mistresses, including Daisy Greville, Countess of Warwick. Through her association with royalty, the King allowed friends to create endowments to help Alice stay financially secure. He also secured a higher-paying job for her husband.

Following Edward’s death in 1910, the Keppels left Britain. Claiming it was for her children’s education, it’s believed the move was because of Alice’s role in society now changing following the death of the King. In 1936 when Edward VII’s grandson, Edward VIII abdicated the throne to marry Wallis Simpson, an American divorceé, Alice reportedly said: “Things were done much better in my day.”

Alice died of cirrhosis of the liver in September 1947 at her palazzo in Italy. Her husband died just two months later. It was said that he could not live without her, having been married to her for the last 56 years.