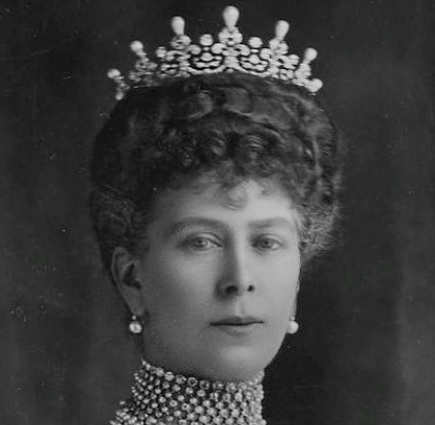 In the sunny days of 1911, all eyes were on one royal. Queen Mary had been consort for just over a year and was now accompanying her husband to a major event that would begin a summer of celebrations for their Coronation. Mary was the leading figure at the Festival of Empire which would include a sporting competition that would turn, eventually, into the Commonwealth Games. And, just as some of the focus on this year’s Games will be on what the royals in attendance are wearing, so, too, was there a spotlight on Mary’s style picks, all those years ago.

For what would become the beginnings of a major global sporting event, Queen Mary chose what The Scotsman described as ‘’a summer like gown of biscuit colour’’. The pale beige of her dress was complemented by a ‘’white feather boa and a hat trimmed with ostrich feathers of an exceedingly pale mauve colour.’’

It should be noted that this ceremony took place on May 12th 1911, just over a year on from the accession of King George V and the death of King Edward VII. Mary, like all royal women, had just completed the first stage of mourning for the lost monarch. Victorian custom dictated the wearing of certain colours for periods of time after the death of a close relation. The first stage of mourning lasted for a year and a day and black dominated. Later stages involved wearing pale shades, including grey, white and lilac – those ostrich feathers had meaning as well as flair.

King George V and Queen Mary arrived at the Festival of Empire by carriage. With them were the heir to the throne, the Prince of Wales, who was approaching his 17th birthday, and their only daughter, Princess Mary, who was then fourteen. They passed through crowded streets on their way from Buckingham Palace to the Crystal Palace where the Festival was taking place. After loyal addresses and a greeting from thousands of local school children, they joined other royals for an ‘’Imperial Concert’’.

The spectacle involved a choir of over 4,500 people from across London, brought together by Dr. Charles Harrids.   A huge orchestra also joined the performance with added oomph given by the Festival of Empire Military Band.

Also in the royal box were King George V’s sister, the Princess Royal, and his aunt, Helena, now known as Princess Christian of Schleswig-Holstein as well as Queen Mary’s youngest brother, Prince Alexander of Teck. Following the concert, they were all entertained to tea before the king and queen greeted more crowds with another well received carriage ride through London.

The Festival of Empire had been designed to highlight the bonds between countries around the world but circumstances also turned it into a part of the celebrations for the Coronation year of King George V and Queen Mary. It was originally planned for 1910 but King Edward VII’s death put it on hold. Instead, it became a chance for his PR minded son to create a festival that would energise the British Monarchy and put London at the heart of global affairs just as his reign began. And at the centre of all that was his queen, Mary, who reigned over everything in the summer of 1911.