Milestones of a Monarch: The visit of Pope John Paul II 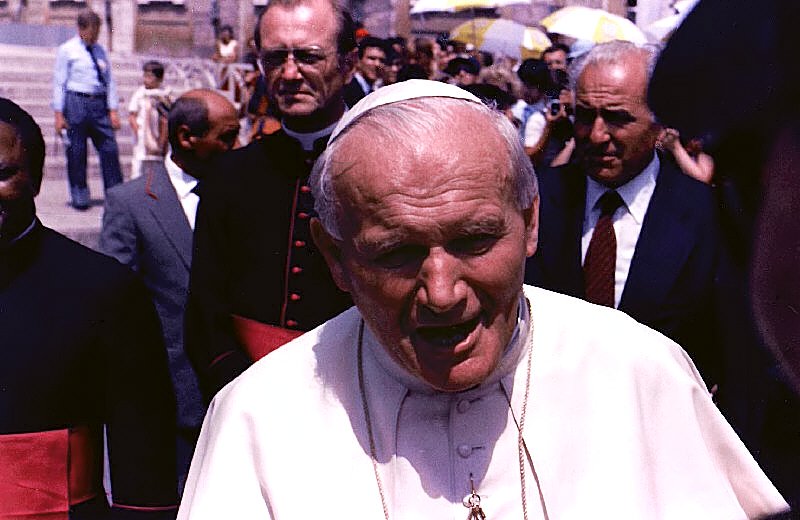 In May 1982, Pope John Paul II visited the United Kingdom marking the first visit there by a reigning Pope.

The visit was organised and largely funded by the Roman Catholic Church. It’s estimated it cost around £7 million at the time. This visit would be a pastoral visit rather than the state visit made by Pope Benedict XVI in 2010. During the visit, the Church offered the public free access to all papal events. Security was of utmost importance at this time as, just a year before, John Paul II had been seriously injured in an assassination attempt in St. Peter’s Square.

Landing at Gatwick Airport on the morning of Friday 28 May and after kissing the runway, the Pope was greeted by 3,500 singing children, Cardinal Basil Hume, Archbishop of Westminster, and Cormac Murphy-O’Connor. Also there at the runway to greet the Pope was the Bishop of Arundel and Brighton, the Roman Catholic diocese in which the airport is located as well as Anglican Bishop, Eric Kemp of Chichester, the Anglican diocese where the Gatwick airport is located.

From the airport, the Pope travelled by train to Westminster Cathedral where he celebrated the first Mass of his visit. It was noted he departed from his prepared text on three different occasions. On one occasion, he called for peace in the Falklands and in Northern Ireland. The first day of the visit was also when he met, The Queen, who is also Supreme Governor of the Church of England.

During the visit to England, John Paul II visited Canterbury Cathedral, becoming the first pontiff to do so. He also had a historic meeting with the Prince of Wales before attending a ceremony with the Archbishop of Canterbury. Before leaving London, the Pope went through Wembley by means of procession for a Mass at Wembley Stadium in front of 80,000 people.

Other stops throughout the country included Coventry, Liverpool, and Manchester where he met with the Chief Rabbi of the United Kingdom, Sir Immanuel Jakobovits. In the city of York, the final stop of the England tour, about 20,000 people gathered for a Liturgy of the Word, at Knavesmire Racecourse.

Following the ceremony in York, the Pope flew to Edinburgh in Scotland where he met with 45,000 people at Murrayfield Stadium. In between Masses, he would take time to visit patients at St Joseph’s Hospital in Rosewell and, he met with educators at St Andrew’s College.

Finally, the trip ended with a visit to Wales where John Paul II was awarded the Freedom of Cardiff, an honour bestowed by the community on someone that is considered a valued member, or a visiting celebrity or dignitary.

Her Majesty The Queen had made history two years prior when she became the first British monarch to make a State Visit to the Vatican on 17 October 1980. Accompanied by the Duke of Edinburgh, she was welcomed by John Paul II at the door of his private library.

Two years later, Her Majesty invited the Pope to England, not for a state visit, but rather a visit “to the Roman Catholic community in Great Britain where some four million of my people are members of the Roman Catholic Church.”

Pope John Paul II died on Saturday 2 April 2005 after he failed to recover from a throat operation. The Prince of Wales postponed his wedding to the Duchess of Cornwall by a day so he could attend the funeral.