Milestones of a Monarch: The Queen presents the World Cup to Bobby Moore 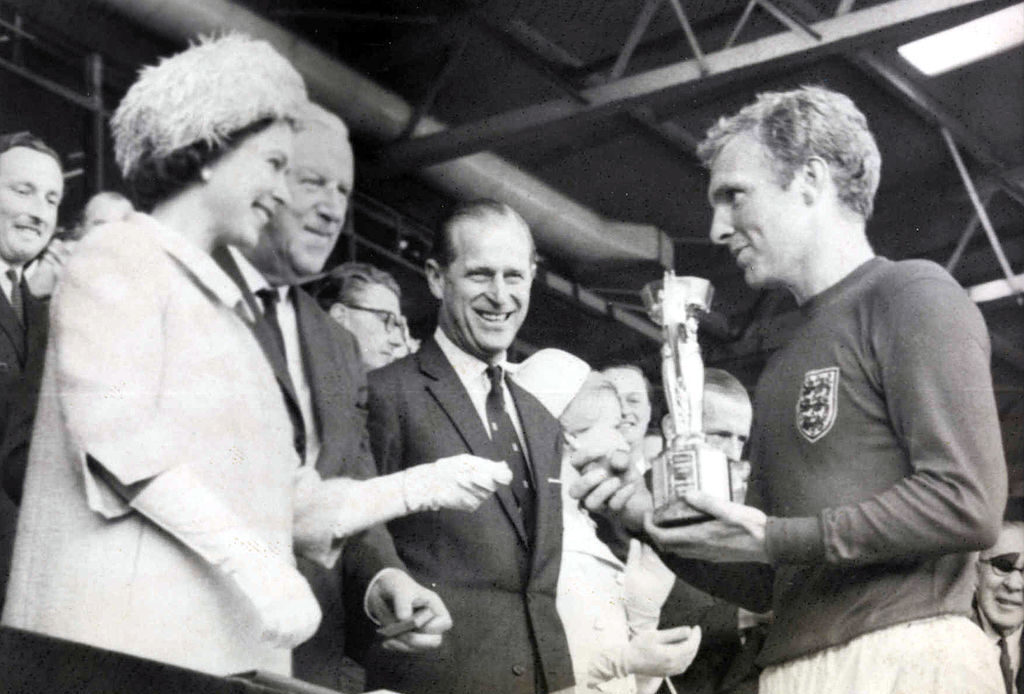 National Media Museum from UK, No restrictions, via Wikimedia Commons

On 30 July 1966, an estimated audience of 32.3 million viewers tuned in to watch the World Cup Final between England and West Germany at Wembley Stadium. Of the thousands who got to watch the match in person were The Queen and the Duke of Edinburgh were in attendance.

The match went into overtime as German player Wolfgang Weber scored an 89th-minute equaliser to tie the game. England went on to claim a 4-2 victory in extra time with Geoff Hurst becoming the only player in World Cup history to score a hat trick in the final. His last goal was accompanied by some of the most famous commentary in football history as Kenneth Wolstenholme noticed fans on the pitch as Hurst approached for his final goal. ”They think it’s all over,” he said, just as Hurst slotted the ball into the net. The celebrated line finished ”it is now.”

Her Majesty presented England Bobby Moore with the cup. Moore, then one of West Ham’s biggest stars, famously wiped his hands on the velvet cloth in the royal box as he approached The Queen, self conscious that he was sweaty and muddy after leading his team to one of England’s most celebrated sporting achievements of all.

It’s still to be matched. In 2021, The Queen congratulated the Three Lions for reaching the Euro 2020 final against Italy. The playoff match that got them to the final would mark the men’s football team’s first major tournament win since the 1966 World Cup.

In a message, The Queen recalled presenting the Jules Rimet trophy to Bobby Moore nearly 60 years prior: “Fifty-five years ago I was fortunate to present the World Cup to Bobby Moore and saw what it meant to the players, management and support staff to reach and win the final of a major international football tournament.

“I want to send my congratulations and that of my family to you all on reaching the final of the European Championships, and send my good wishes for tomorrow with the hope that history will record not only your success but also the spirit, commitment and pride with which you have conducted yourselves.”

The Euro 2020 Final was also played at Wembley Stadium which since 1966, had been demolished and rebuilt on the stadium’s original site. Italy went on to beat England 3-2, marking Italy’s second European Championship. While Her Majesty was not in attendance, the Duke and Duchess of Cambridge were there alongside their son, Prince George.