Looking back at the wedding of George V and Queen Mary 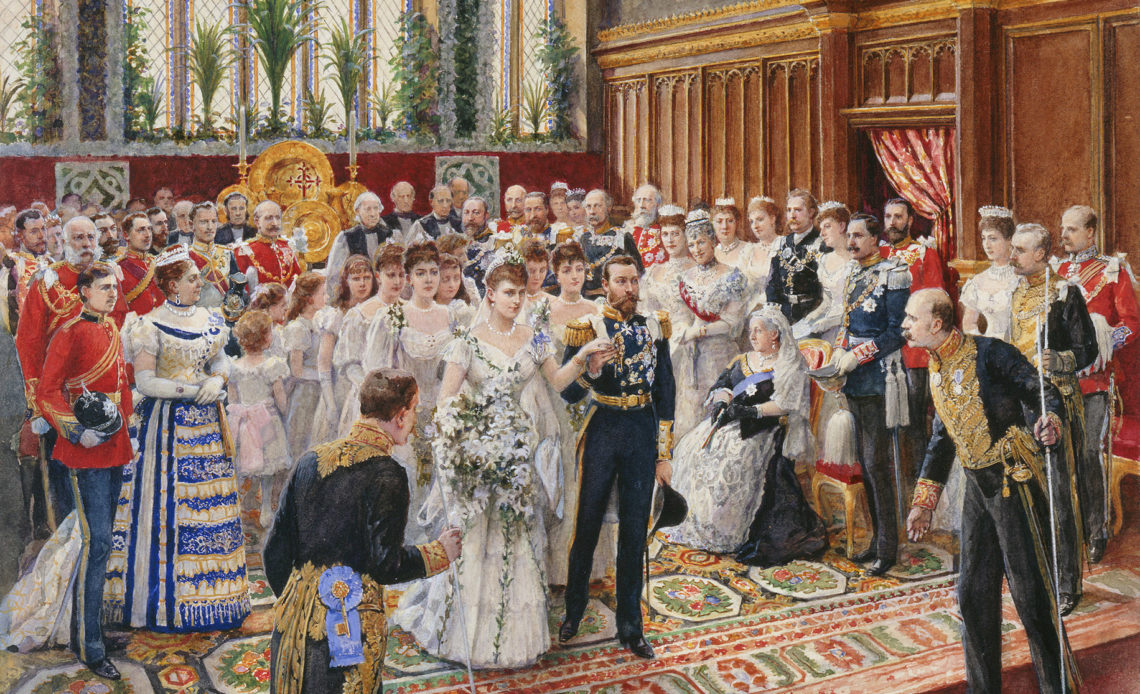 On 6 July 1893, another royal wedding was celebrated at the Chapel Royal, St. James’s Palace, between Prince George of Wales – created Duke of York in 1892 – and Princess Mary of Teck, the future George V and Queen Mary. Princess Mary of Teck had been betrothed in December 1891 to Prince Albert Victor, Duke of Clarence and Avondale, eldest son of the Prince and Princess of Wales, who had died prematurely of pneumonia at Sandringham in 1892, the Norfolk home of the Prince and Princess of Wales.

After a period of mourning, Princess Mary of Teck became engaged in May 1893 to Prince George, her erstwhile fiancé’s younger brother, just as Princess Dagmar of Denmark had been betrothed in an earlier generation, to Tsarevich Alexander, the younger brother of her first fiancé, Tsarevich Nikolai Alexandrovich of Russia, who had died of meningitis at Nice in 1865. As in both royal cases, it probably contributed to the success of both marriages, that the couples were drawn closer by mutual mourning for the elder brother. The connection with Sandringham was one that continued in the case of the Duke and Duchess of York. The Norfolk residence where Prince Albert Victor had died becoming their choice for both honeymoon and later, preferred home for themselves and their family at York Cottage on the estate, where they lived in addition to their official London apartments at St James’s Palace.

Despite the death of the young Prince Albert Victor, Duke of Clarence, Queen Victoria continued to favour the choice of Princess Mary “May” of Teck as a bride for one of her Wales grandsons, commenting approvingly that she was “quiet and reserved… the reverse of oberflächlich…[superficial] [with] such good manners which in the present day [were] not too frequent…” 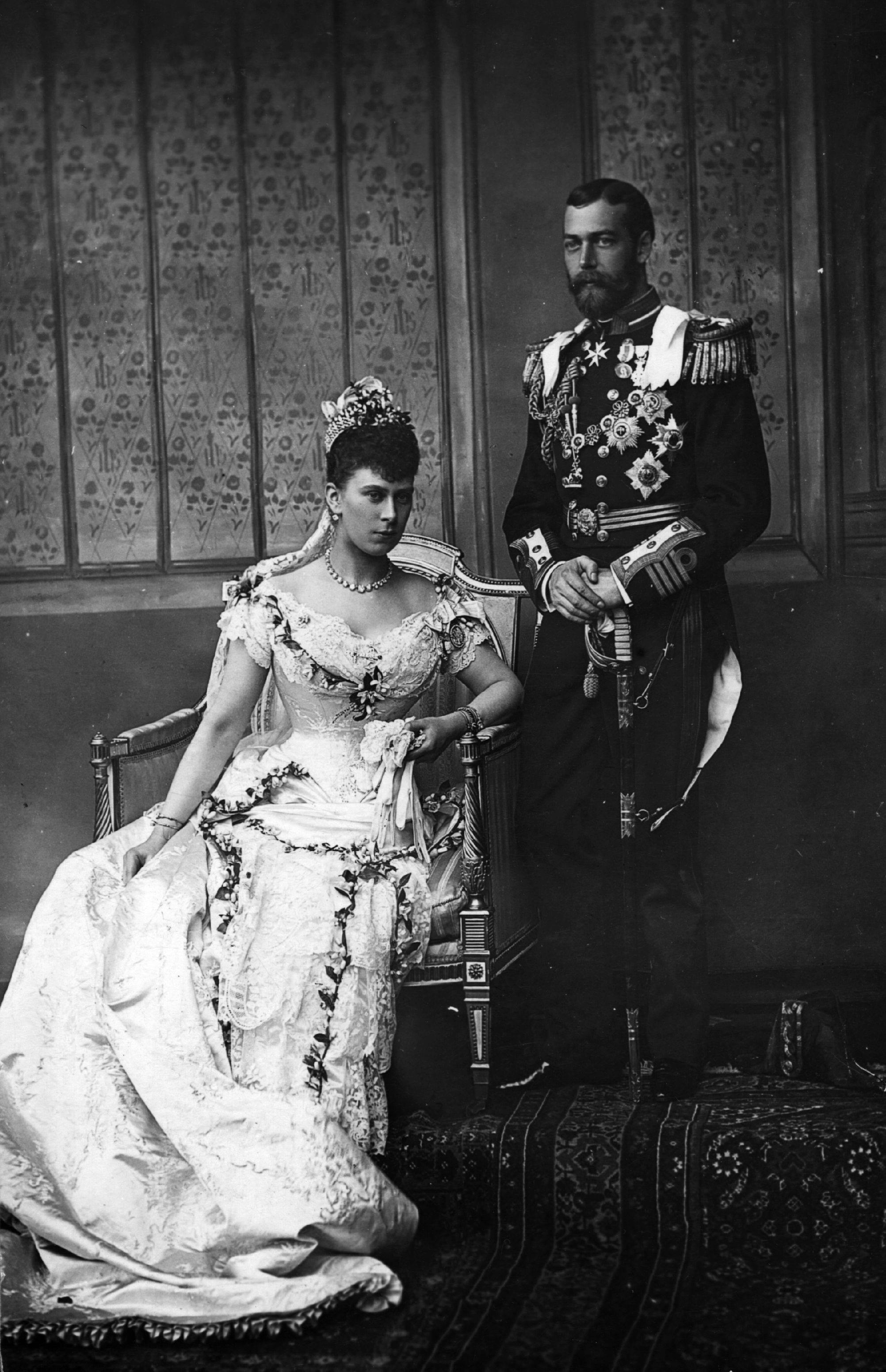 The wedding took place – after a two-month long engagement – in a sweltering heat of a London summer, in marked contrast to the wedding day of Prince George’s paternal grandmother Queen Victoria, which began with torrential rain, before she set out for St. James’s Palace on the morning of 10 February 1840. Nor was it the wintry January wedding of the Queen and Prince Albert’s eldest daughter, The Princess Royal, also celebrated in the Chapel Royal at St. James’s Palace, in 1858. That day, 6 July 1893, was two years exactly to the date since the marriage of another of her grandchildren, Princess Marie Louise of Schleswig-Holstein, to Prince Aribert of Anhalt, at St. George’s Chapel, Windsor.

The remembrance of her own wedding in the Chapel Royal could not fail to be the subject of wistful comment by the Queen, who by this date had already been widowed for thirty-two years and witnessed her grandson standing where her husband Prince Albert had done, fifty-three years earlier. The wedding day was also the birthday of the Prince and Princess of Wales’s second daughter, Prince George’s sister, Princess Victoria of Wales, one of Princess Mary’s bridesmaids. As usual when mentioning the royal bride, Queen Victoria at some point describes what she herself wore that day, perhaps a subconscious protest to her own widowed state. As Queen Victoria had done at the wedding of her youngest son Prince Leopold in 1882, she again wore the bridal veil she had worn in the Chapel Royal at St. James’s Palace in 1840 (“my dear wedding veil”).

Princess Mary of Teck by contrast wore the wedding veil of her own mother, Princess Mary Adelaide of Cambridge, Duchess of Teck. Her bridal wreath of orange blossom, myrtle and white heather, mirrored what many of her daughters and daughters-in-law had worn as decoration for their wedding dresses. Princess Mary’s wedding dress featured decorations of silver bunches of traditional English and Irish flowers tied in a lover’s knot, woven by Messrs Warner of Spitalfields. Princess Mary’s aunt, Grand Duchess Augusta of Mecklenburg-Strelitz, who attended the wedding, gave £1,000 towards her niece’s exclusively British-manufactured trousseau; a pink satin sachet from this trousseau has been preserved in the Royal Collection.

The wedding dress – of white satin – was made by the dressmaker Linton and Curtis of 16 Albemarle Street, London and survives in the Royal Ceremonial Dress Collection at Kensington Palace. Even the actual Honiton lace handkerchief held by Princess Mary on her wedding day, also survives in the Royal Collection, with a note in her own handwriting, identifying it as such. It is appropriate that the later Queen Mary, who promoted the cataloguing of items within the Royal Collection so assiduously, has treated an item of such personal significance in such a similar way, tacitly acknowledging the object’s own place in royal history. In the manner in which she has done this, however, Queen Mary differs markedly from Queen Victoria, who almost certainly would have annotated such an item in more personal language. Instead Queen Mary’s handwriting has the more distanced, pragmatic tone of a royal cataloguer, referring to herself without emotion but also correctly, as it having been the handkerchief held by “Victoria Mary Duchess of York”.

The Supplement to the London Gazette for 19 July 1893, reported that the officiating clergy included the Archbishop of Canterbury, the Bishop of London, the Bishop of Rochester as Clerk of the Closet, the Sub-Dean of the Chapels Royal, Rev. Edgar Sheppard, the Domestic Chaplain to the Prince of Wales, Rev. Canon F.A.J Hervey, the Chaplain to the Duke of York, Rev. Canon Dalton and the Vicar of Kensington and Chaplain to Her Majesty, the Hon. and Rev. E. Carr Glyn. The royal guests in attendance included Christian IX and Queen Louise of Denmark, the Grand Duke and Duchess of Mecklenburg-Strelitz, the young Grand Duke of Hesse, the Tsarevich Nicholas of Russia, Prince Waldemar of Denmark, Prince Albert of Belgium, Prince and Princess Heinrich of Prussia, Prince Philip of Saxe-Coburg Gotha, the Duke and Duchess of Edinburgh, the Duke and Duchess of Connaught, Prince and Princess Christian of Schleswig-Holstein, Prince and Princess Heinrich of Battenberg, Princess Louise, Marchioness of Lorne, the Duke of Cambridge and the Duke and Duchess of Teck. The clergy processed into the Chapel Royal by the main entrance, to Handel’s ‘Occasional March’, which was played on the organ.

The Tsarevich Nicholas of Russia – the future Tsar Nicholas II – stayed at Marlborough House on the Mall, during his visit to England for the royal wedding, where he occupied as he put it in his diary, “a cosy room upstairs between the girls and Georgie”. The Tsarevich greatly resembled the Duke of York, which gave occasion for many unfortunate misunderstandings, the most notable being that made by a gentleman of the Court who approached the Duke of York, thinking him to be the Tsarevich Nicholas, to remind him not to be late for his own wedding the following day. The Tsarevich noted in his diary for 1893: “I met the bride – May – whom I liked very much. We looked at the presents for her and Georgie which have been laid out in a corner room, an amazing amount of things!” (Andrei Maylunas & Sergei Mironenko, A Lifelong Passion, Pg 27-8, 1997). It is fitting that some of the wedding gifts to the future Queen Mary, who took such a keen personal interest in the Royal Collection, should survive within it today, presented to her from the time that she entered the Royal Family; a sapphire and ruby bracelet given to her with her initials in diamonds, has survived in the Collection, bearing the date of her marriage to the Duke of York. She received included a diamond necklace from Queen Victoria. Some of the other gifts she received she would later gift to her granddaughter, Princess Elizabeth on her wedding in 1947.

The processional route left Buckingham Palace up Constitution Hill to Piccadilly and onto St James’s Palace via St. James’s Street and into the Palace by the Garden Entrance, the royal wedding guests being conveyed to St. James’s in thirteen carriages, as the London Gazette records in detail. On arrival, Princess Mary of Teck’s ten bridesmaids were taken to the Princess’s Waiting Room by the Vice-Chamberlain to await her. These bridesmaids were Princesses Victoria and Maud of Wales, Princesses Victoria Melita, Alexandra and Beatrice of Edinburgh, Princess Helena Victoria of Schleswig-Holstein, Princesses Margaret and Patricia of Connaught, Princess Alice of Battenberg and Princess Victoria Eugenie of Battenberg. Her bridesmaids appear in the photographs made by Lafayette after the wedding, nine of them all granddaughters of the Queen and the tenth, Princess Alice of Battenberg, mother of HRH Prince Philip, The Duke of Edinburgh and the Queen’s great-granddaughter through her mother, Victoria, Princess Louis of Battenberg. Each of the ten bridesmaids received a memento bracelet from the Duke of York, made by the company Collingwood & Co.; the bracelets featured a Rose of York brooch in gold, enamel and diamonds, the historic white Yorkist rose an emblem of the bestowal of his recent dukedom the previous year.

Princess Mary was escorted up the aisle by her father, the Duke of Teck. The ceremony itself was well captured in the watercolour made of the wedding by the artist Amadee Forestier, showing Queen Victoria sat to the right of the altar; perhaps significantly, sitting close to the spot where her beloved husband Prince Albert had stood, as shown in the painting made by Sir George Hayter of her own marriage in the Chapel Royal at St. James’s Palace in 1840.

The magnificent wedding cake of the Duke and Duchess of York consisted of three tiers and featured highly ornamental floral decoration, including white roses, ferns, silver lovers’ knots, shields and the monograms of the bride and bridegroom. The cake was photographed in its own right at the Wedding Breakfast (for some 400 guests) at Buckingham Palace, as were several of the wedding cakes of the Queen’s children on their marriages in the previous generation. The Queen stepped out onto the world-famous balcony at Buckingham Palace overlooking the Mall, together with the Duke and Duchess of York, to the cheers of an amassed London public. It was not the first time that she had stepped onto this balcony, now so closely associated today with later royal weddings, the RAF Flypast at the close of the Trooping of the Colour as part of The Queen’s official annual birthday celebrations. The first recorded Royal Balcony appearance was that made by Queen Victoria as part of the festivities to mark the opening of the Great Exhibition in 1851; it provides, therefore, a very living link with royal weddings, both then and now.