Leonor of Asturias: a portrait of Spain’s future Queen 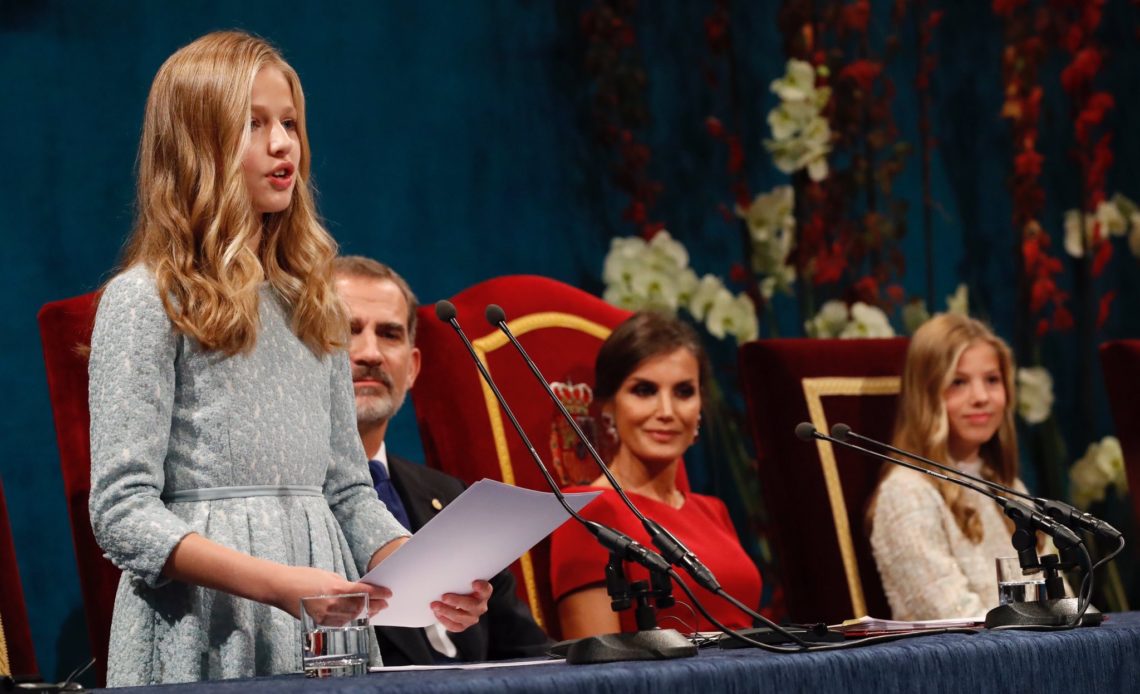 She seems out of a fairy tale with princes and princesses: Leonor, Princess of Asturias, future Queen of Spain, the first Spanish queen since Isabella II (1833-1868). Born on 31 October 2005 to Felipe, Prince of Asturias and his wife, Letizia, Princess of Asturias, during the reign of King Juan Carlos, who abdicated in favour of his son on 18 June 2014, Leonor is now first in the line of succession to the Spanish throne.

Looking at the calm and assured way in which Leonor and her younger sister, Infanta Sofía, conduct themselves, one has to acknowledge that the two princesses are very well behaved and well educated. With a difference of just eighteen months between them, the two girls are always seen together and seem to share a strong bond: when Infanta Sofía used crutches at a recent walkabout, her sister helped her by holding her hand. Although Leonor is older, for a long time, she had been shorter. Until very recently, Sofía appeared more mature physically and less shy. But now, it seems that Leonor has caught up with her sister, and both are equally tall.

Leonor gave her first public speech on 31 October 2018 when she celebrated both her 13th birthday and the 40th anniversary of the Spanish Constitution. On that occasion, she read from the Constitution, impressing everybody with her confidence. A month earlier she had had her first public engagement outside of her attendance at the opening of the Cortes Generales and Spain’s national day), celebrating the 1,300th anniversary of the Kingdom of the Asturias.

Both the King and Queen of Spain hold master’s degrees and it is known that Queen Letizia places great value on high culture. If the Danish Royal Court is the most artistic European court, the Spanish Royal Court is among the most intellectual. Every year, the Spanish Royal House takes part in the the Princess of Asturias Awards, where some of the most impressive contemporary scientists, humanitarians, writers and artists are awarded medals. It was set up under King Juan Carlos and Queen Sofía in 1981 to celebrate achievement in culture, sport and science, and in 2019, Leonor gave her first official speech at the festivities.

It was captivating to watch her hold her own among the prize winners and to see her interact with one of the celebrated stars, the American writer and feminist Siri Hustvedt, who, during her speech, talked about what it felt like to receive such an important prize from the hands of the princess.

It is also interesting to watch the public interaction of Spain’s King and Queen with their daughters: it is obvious that the King identifies with his firstborn because she will take his place someday, and every time they are in public, he is training her for her future role. When he bestowed on her the Order of the Golden Fleece on the occasion of her 10th birthday, you could see the enormous affection he has for her in the way he looked at her, as if trying to shield her from the burden of future responsibilities.

On the other hand, it is evident that Queen Letizia tries to protect her younger daughter from the fact that the second-born child will usually have a place lower down the pecking order. Many royal parents have worried that this will breed resentment. So far, it appears that the relationship between the two sisters is strong, and whenever Leonor speaks in public, she is careful to include her sister in her remarks.

Leonor speaks English and Catalan besides Spanish and knows some Mandarin, and in the future, she will also have to receive training in military affairs. When one sees her in public one is struck by her eagerness to please her father, to whom she looks for approval after every gesture. By contrast, her sister is more relaxed—the advantage of the second-born. Recently, at a public event, a child asked Leonor what she wanted to do when she grew up. Before the Princess had time to open her mouth, her mother answered in her place: “Not what she wants to. What she has to.”

It is an interesting interpretation of the life that awaits Leonor, the fairytale princess born to rule Spain.