Is there a hidden message in the background of The Queen’s latest appearance? 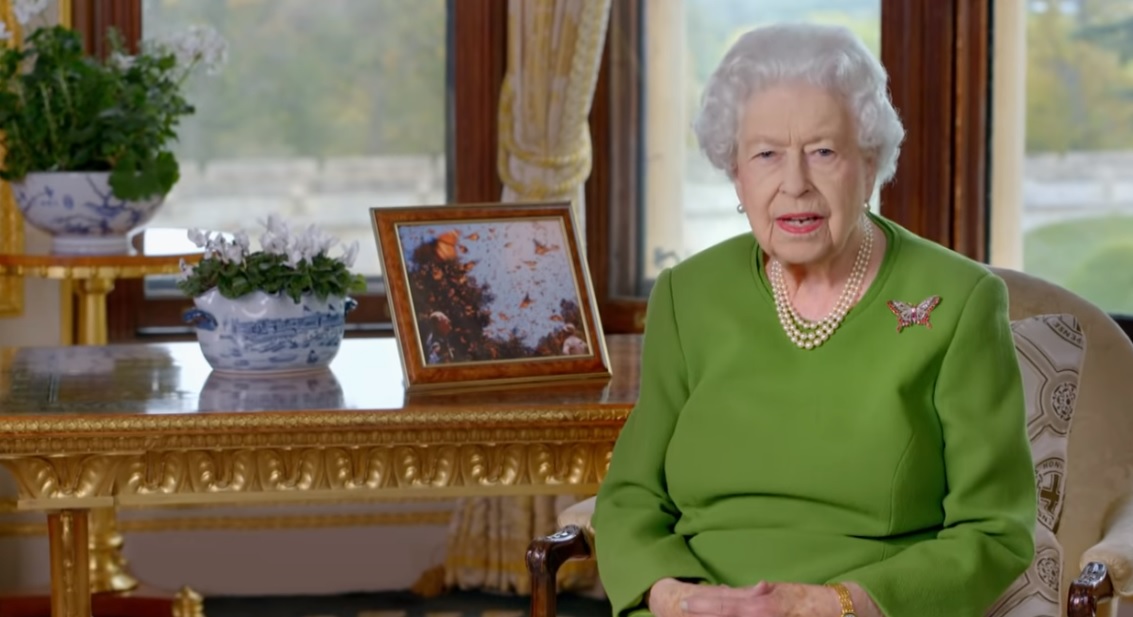 As she delivered her message by video to the COP26 summit in Glasgow, The Queen was seen in one of the splendid rooms of Windsor Castle with the green pastures of that ancient royal domain stretching out behind her. But in the background was perhaps another message.

The Queen had, for support, a cushion. No surprise there. She is 95 and on doctors’ orders to rest. None of us expected her to speak to the summit while abseiling from the ceiling of St. George’s Hall. But the cushion had a rather eye catching motto on it and it linked the current Monarch to another ruler whose reign remains a milestone in royal history.

‘Honi soit qui mal y pense’ was printed across the cushion. It is, of course, the motto of the Order of the Garter which was founded at Windsor in the 14th century and which remains so well associated with it now. So far, so very well co-ordinated. However, the meaning of that famous phrase makes it rather an interesting choice. For it was coined, so legend has it, by a king who had had enough of idle gossip.

Edward III is said to have uttered the famous phrase after picking up a garter that had fallen from the leg of his dancing partner and placing it on his own ankle. As medieval eyebrows began to point skyward, the king is reputed to have looked rather archly at those gathered around him before declaring ‘’honi soit qui mal y pense’’, or ‘’shame on him who thinks evil of it’’.

Like many a good legend, in all likelihood things didn’t quite happen that way. But from its very earliest days, the Order of the Garter took it as its motto and the phrase soon found its way on to the royal coat of arms. As such, it crops up frequently in the 21st century – if you’re a British passport holder then it’s on the front of your documents while it’s also on display in court rooms in England. And now it’s taken a rather subtle starring role in The Queen’s much praised address to COP26.

So is Elizabeth II following in the footsteps of her predecessor, Edward III, and issuing a rather regal warning to those with their minds on tittle tattle?

Her decision not to travel to the COP26 summit, followed by the announcement that she was taking two weeks’ rest on doctors’ orders, led to some rather frenzied speculation about her general health. There’s been more talk of abdication and regencies with some turning the world’s longest serving Head of State into a two dimensional caricature of a sitcom nan. The wise and diplomatic call to action The Queen voiced in her message will have answered questions about how she’s managing her workload. But that phrase that has echoed through the corridors of Windsor for centuries seems particularly relevant now for those questioning whether the royal rest up is something more serious.

If you think badly of it, then more fool you could be taken as the message, a kind of royal ‘get over yourself’ to the torrent of speculation surrounding recent medical decisions. While The Queen will have been touched by genuine interest in her health and wellbeing, she is carrying on as normally as she can and no doubt has every intention of being out and about as soon as is possible.

We’ll never know whether that rather classy cushion was chosen on purpose or whether it just happened to be the one the dogs hadn’t slept on that morning. Either way, it’s a reminder of a well worn royal motto that remains as pertinent as the day it was first uttered in the ancient walls of Windsor, amidst the rolling green fields that remind us all of how precious our planet remains, as did the words spoken there in 2021 by another history making Monarch.