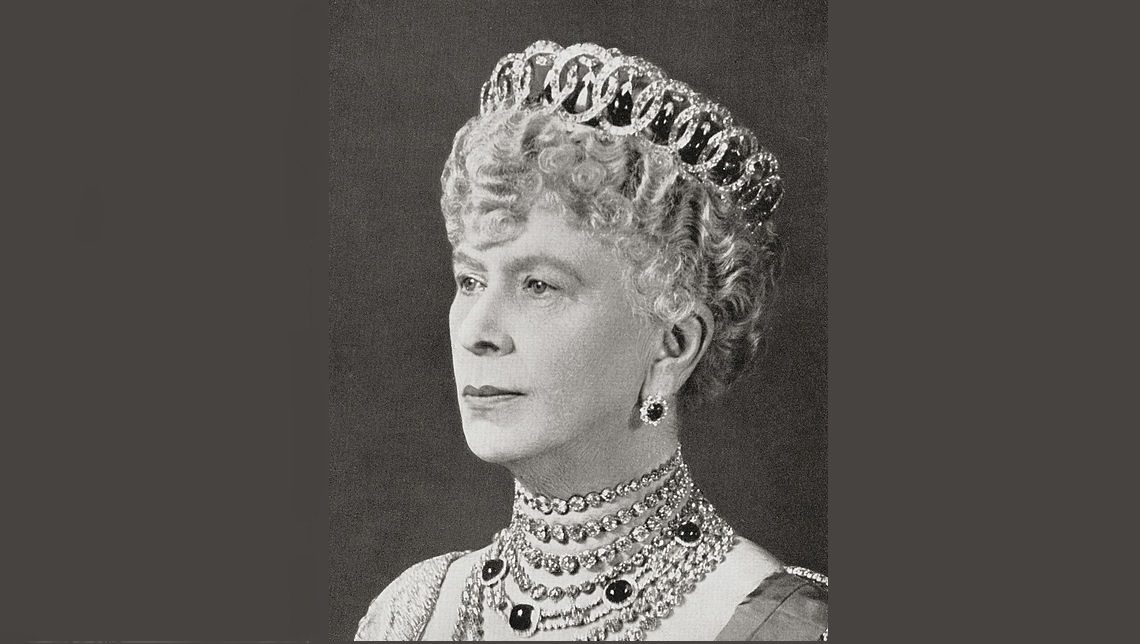 In the first days of the summer of 1939, an accident befell the Royal Family that led to a widespread outpouring of sympathy. Queen Mary, mother of King George VI, was involved in a car crash. Her son was touring Canada as the country prepared for what felt like a growing inevitability of war when the dowager’s car collided with another vehicle. Queen Mary, in the back seat, was badly bruised but made a swift recovery. Yet the incident became a major talking point in the country.

Queen Mary’s car overturned in Putney after a collision with a lorry on May 23rd 1939, just days before her 72nd birthday. The papers had acres of coverage. In fact some, including The Sphere, carried photos of the overturned vehicle as well as of the queen as she was driven away from the scene later. Mary is clearly shaken but maintains the calm composure that became her calling card.

The Western Gazette headlined ‘’Queen Mary received severe bruises’’ while the Birmingham Daily Post noted that ‘’she sustained the sort of shock liable to leave effects which will last longer that the stiffness and bruises now requiring treatment.’’

It was reported that the royal car had collided with a lorry at a ‘’dangerous cross roads’’ and led to an ongoing debate about road safety.  Queen Mary was helped from the overturned vehicle by a painter working nearby who propped his ladder against the car to allow her to scramble free. She then went to a nearby house to rest while another car arrived to take her home.

The medical bulletin issued after she had returned to her London home at Marlborough House noted that ‘’Her Majesty Queen Mary is suffering from bruising and shock as the result of an accident this afternoon in which Her Majesty’s car was overturned. Though the bruising is considerable, and will need some days’ complete rest, Her Majesty’s condition is this evening satisfactory.’’

However, the papers also reported that the queen was joking with those around her as she made her way from the scene of the accident. The Aberdeen Evening Express  carried the widely noted comments from Mary in the aftermath when she told those concerned for her health that ‘’I am going to have a cup of tea and that is all I want.’’

Perhaps what is most surprising is that Queen Mary chatted happily with those around her in the aftermath of the accident. Mary has a steely, somewhat aloof reputation while the modern narrative is that royals didn’t interact with others until the late 20th century. However, the queen in question was more than content to reach out to those asking after her health and every paper the following day carried reports of what the King’s Mother had said as she scrambled from her overturned car.

And the story soon took on a life of its own. Just days after the accident, a feature writer in the Leicester Daily Mercury used it as a starting point for a story on the benefits of gardens, telling their readers that ‘’after Queen Mary’s accident Her Majesty was escorted to a house with a garden…she is reported to have said ‘’what a lovely garden! Aren’t the tulips beautiful this year? Now I don’t need a doctor.’’

Meanwhile, it further fed a continuing debate about how to keep roads in Britain safe. Motoring was still a relatively new concept and there was widespread concern about how busy roads were becoming and how the ever increasing traffic was being managed. All those who reported on this incident noted that neither party involved could be held to blame as the cross roads were notoriously dangerous and there was little direction for traffic at the spot.

The papers also noted that the accident happened at a crucial time for the Royal Family. King George VI and Queen Elizabeth had just left for a visit to Canada, travelling across the Atlantic by boat. The Ballymena Observer highlighted the separation this entailed for the famously family focused king and queen from their daughters, Elizabeth and Margaret, adding ‘’Queen Mary is acting as mother to the two little Princesses’’. Many carried reports on the king being kept informed of his mother’s progress.

Mary kept calm and carried on. As summer progressed and the march towards war became unstoppable, her indomitable spirit came to the fore. Any pain or worry was kept to the privacy of her palace. A smile, a cup of tea and a wave to those watching was all she needed before Queen Mary sailed on from an incident that shocked the country.