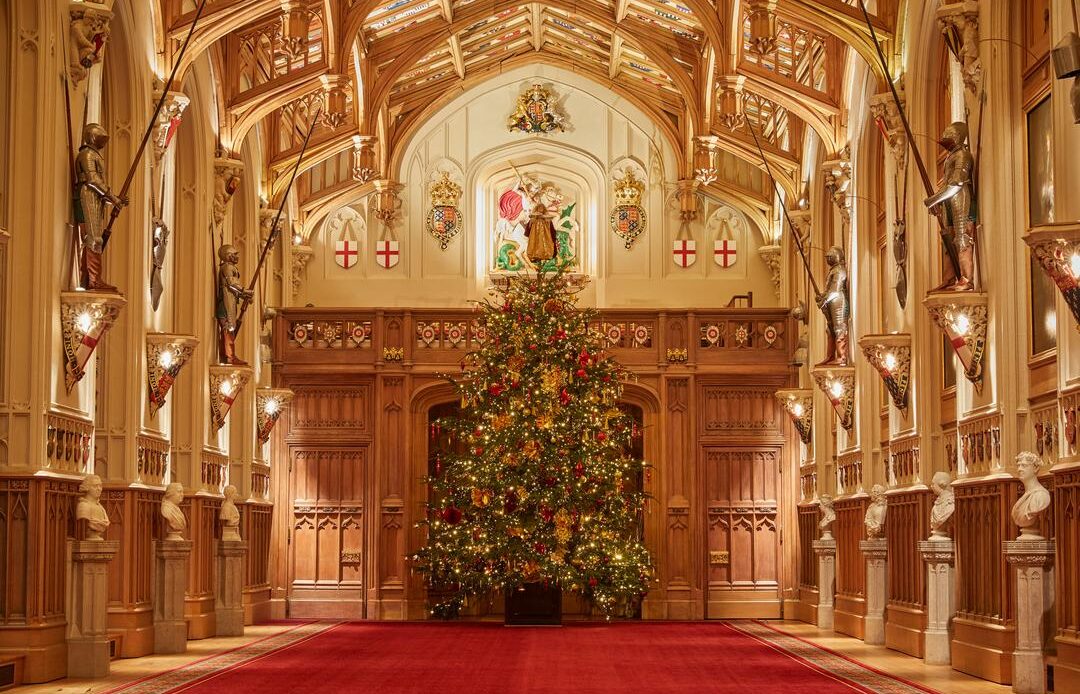 Prince Albert is generally credited with introducing the Christmas tree to Britain, but in fact, it was the work of his wife’s grandmother, Queen Charlotte. Like Prince Albert, Charlotte was born and raised in Germany, where the tradition of bringing a tree inside at Christmas time, decorated with lights and sweets, is believed to date back to the 16th century. As a child, Charlotte’s family always decorated single yew branches and laid presents for each other underneath. When she married King George III in 1761 this was the custom she brought with her to England.

There’s no definite evidence that Queen Charlotte decorated an entire tree until the Christmas of 1800, although it’s possible she did. It was in preparation for a Christmas party, held for local children at Windsor Castle in that year, that she decorated the yew tree at Queen’s Lodge. It stood in a large tub in the middle of her drawing room, illuminated by candles, and loaded with fruit, sweetmeats and toys. For the children and adults alike it was an enchanting and novel spectacle. Each child was given ‘a portion of the sweets [the tree] bore, together with a toy, and then all returned home quite delighted’ according to one of the guests. After this, the Queen continued to set up trees at the royal residences during her lifetime, and it was a tradition the royal family continued after her death. In her diary, a teenage Princess Victoria recorded her delight at the Christmas trees at her home at Kensington Palace, which were hung with lights and sugar ornaments.

However, away from the royal court the Christmas tree was still a relatively unfamiliar custom. The aristocracy began to replicate the trees they had seen at court in their own homes, primarily as a special treat for children, and there were also small communities of German merchants known to be decorating Christmas trees in Britain during this period. But the majority of the British population had no knowledge whatsoever of the Christmas tree. In fact, the festival of Christmas was barely ever mentioned in the national press.

That is, until media interest in the young Queen Victoria and her consort Prince Albert reached fever pitch. By the 1840s, the popular press was reporting on every detail of the young couple’s life, including how they celebrated Christmas. At first, newspapers had to explain the concept of the Christmas tree to their readers, but it was pictures such as this one in the Illustrated London News in 1848 which saw the Christmas tree really take off.

The middle classes rushed to emulate the royals with a tree of their own, and by the end of the 1850s it was well established as a Christmas custom. So whilst Albert may not have been the first to introduce the Christmas tree to Britain, he and Victoria were indisputably the ones who popularised it. Christmas was a special time of year for the royal couple and they enthusiastically encouraged the spread of their own Christmas traditions throughout the country; every year Albert arranged for trees from the royal estates to be gifted to schools and army barracks.

Victoria and Albert themselves usually had several trees at Windsor Castle, where they typically spent the festive season: they had one each, and there was also one for Victoria’s mother, one for their children to share, one for the members of the Royal Household and one for the servants. Each individual tree was placed in the centre of a table, on which would rest the presents, always exchanged on Christmas Eve rather than Christmas Day. Known as ‘Heiligabend Bescherung’ this was another German tradition, one which the British Royal Family continues to this day, just as they still lay their presents for each other out on trestle tables, even though their Christmas tree now stands alone.

Victoria and Albert’s trees were spruce firs rather than yew trees and always lavishly decorated. They are thought to have had some of the first specially manufactured tree decorations, imported from Germany, along with the trees themselves, which came from Albert’s native Coburg. They were even known to replace some of the chandeliers at their royal residences with decorated Christmas trees hung from the ceiling – quite a spectacle, and one which was replicated at Windsor Castle back in 2011.

Once the tradition of decorating trees at Christmas took hold in the UK, it never went away. Today, somewhere in the region of seven million real trees are sold each year in Britain during the festive season, plus another two million artificial trees. The Queen gets the Christmas trees at her royal residences up early; the magnificent tree in St George’s Hall at Windsor Castle is just one of several already on display for the public to admire and envy this year.

Like Prince Albert, the Queen will also gift Christmas trees from the royal estate. Each year trees are given to Westminster Abbey and St Paul’s Cathedral in London, St Giles’ Cathedral and the Canongate Kirk in Edinburgh, and to schools and churches near Sandringham in Norfolk.

The Royal Family will put the finishing touches to their own tree at Sandringham House when they gather there on Christmas Eve. It’s said that the royal Christmas decorations stay up until the Queen leaves for London again in early February, even though British tradition says they should stay up until Twelfth Night but no longer, to avoid bad luck for the year ahead. Opinion is likely to be strongly divided over whether that’s another royal Christmas custom we should all adopt!