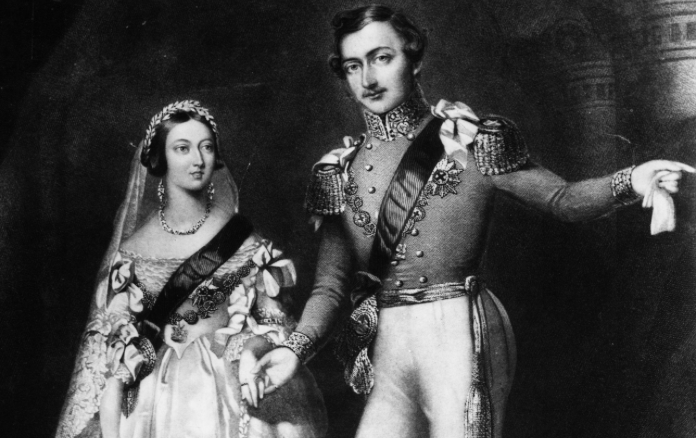 The wedding ring of Queen Victoria has its special poignancy, a symbol of the passionate marriage she enjoyed with Prince Albert. Placed on her finger on the morning of 10 February 1840, her private instructions ensured that she would wear it in perpetuity. What do we know of it?

If we study the paintings and engravings made that show the hands of Queen Victoria and Prince Albert joined, we might look then for the wedding ring to which she attached such intense personal importance. The fashionable painter Franz Xaver Winterhalter made an exquisite picture The Linked Hands of Queen Victoria and Prince Albert, in keeping with the sentimental tradition of love-token art, although it acquired a later, moving quality because on Prince Albert’s deathbed at Windsor, the Queen would describe ‘the hand clasping mine…’ and in her coffin, she ordered that a cast of ‘my beloved Husband’s hand’ be amongst the mementoes placed inside.

Reflecting on the morning of her wedding at the Chapel Royal, St James’s Palace, the Queen noted in her journal: ‘The Ceremony… ought to make an everlasting impression on every one who promises at the Altar to keep what he or she promises’ (cit., Elizabeth Longford, Queen Victoria, 152). The artist Sir George Hayter captured the moment at the altar in his large painting of Queen Victoria’s marriage; Prince Albert placed her wedding ring on her finger. The evening before the wedding, Queen Victoria and Prince Albert had practised the marriage ceremony and the putting-on of her ring: ‘We read over the Marriage Service together and tried how to manage the ring’.

That same day before the wedding, Queen Victoria noted in her journal that she had received a ‘beautiful’prayer book from her mother, the Duchess of Kent. Prince Albert was given a prayer book from the Duchess of Kent on the wedding day – the Duchess of Kent, also being his aunt. Bound in dark green velvet with a bookmark of semi-precious stones, whose first letters spell VICTORIA: Vermeil, Jargoon, Chrysolite, Turquoise, Opal, Ruby, Jargoon again, and Amethyst. The gold fastening is made of two clasped hands, recalling the joining of the hands at the royal wedding. The Queen wrote in her journal: ‘I felt so happy when the ring was put on and by Albert’ (ed. Lord Esher., The Girlhood of Queen Victoria, A Selection of Her Majesty’s diaries between the years 1832 and 1840, 320).

On returning to Buckingham Palace for the wedding breakfast, she first went upstairs to her dressing-room, where she spent a blissful half-an-hour with Prince Albert: ‘sat on the sofa’. It was during this time that Queen Victoria appears to have given Prince Albert his wedding band, privately (Longford, 152).

A beautiful ring had been given to the Queen on the occasion of her wedding to Prince Albert by her beloved half-sister, Feodore, Princess of Hohenlohe-Langenburg. It showed a crowned double heart and was inscribed in French ‘Unis a jamais’ [United forever].

Queen Victoria’s hands became proverbial in her later reign for wearing a whole collection of rings. She clearly continued to associate them naturally, with marriage. We know this because she gave a ring to her beloved granddaughter, Princess Alix of Hesse, on her marriage to the new Tsar, Nicholas II. Newly married, Alexandra wrote to thank her grandmother for a pendant containing her portrait and the ‘lovely’ring, which she had worn at the imperial wedding (Andrei Maylunas and Sergei Mironenko, A Lifelong Passion, 112).

When the Queen’s body was prepared for burial, according to her private instructions, it was clear that she wished her wedding ring to be placed on her finger, which it duly was. A number of other rings were also put on her fingers, including perhaps incredibly, the simple gold wedding ring which had once belonged to the mother of her faithful Highland attendant, John Brown. This ring had apparently been worn by the Queen, since the death of Brown in 1883 (Kate Hubbard, Serving Victoria, Life in the Royal Household, 359).

The marble effigy of the Queen may possibly be wearing a ring; her figure certainly clasps a sceptre and is crowned, showing that Prince Albert’s wife – and she appeared in this effigy as an eternally young woman – was unmistakably, a Queen. I cannot yet determine this, as the photographs I have examined do not show the effigy from an angle that allows the left hand to be scrutinised.

Unmistakably, however, the wedding ring which she had received in 1840, was symbolic of that day she ever regarded as the ‘happiest’ of her life.