Edward II and the kiss that crushed his queen 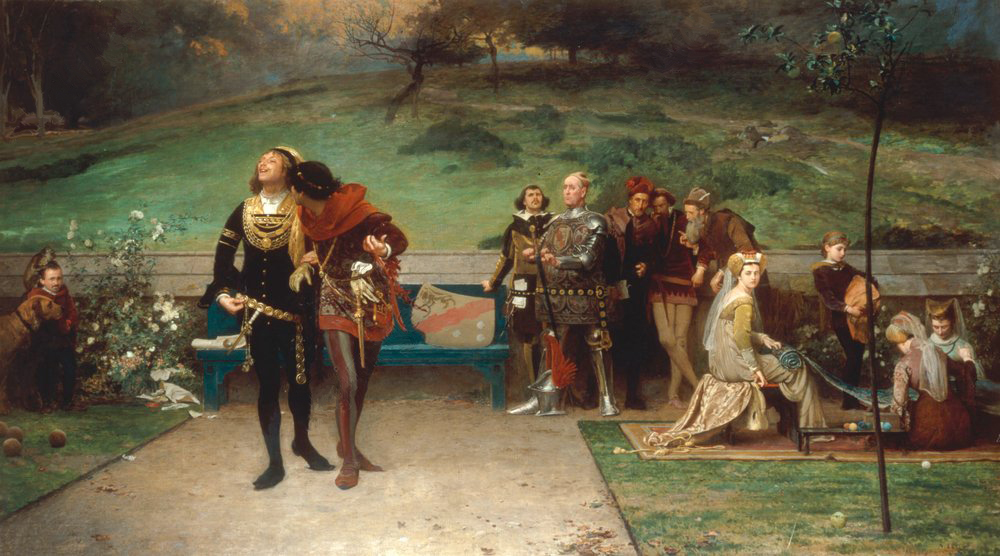 In February 1308, England welcomed its new queen to her realm for the first time. Isabella, consort to King Edward II, arrived with her husband at Dover after an elaborate wedding in her home country. Isabella expected adulation and respect. Instead, she watched as Edward showered kisses on a court favourite. It would set the template for a marriage that ultimately led to betrayal, a fight for the crown and allegations of murder.

Isabella had just stepped foot in Dover when her husband abandoned her to greet his beloved friend and advisor. Piers Gaveston, Earl of Cornwall, was waiting at the docks for his master who spent several minutes hugging him and planting kisses on his cheeks while his new queen and her retinue stood and waited for the encounter to end. If they were surprised by the outpouring of affection, then few at the English court they were joining shared their shock. Edward II had come to rely heavily on Piers Gaveston who wasn’t shy about exploiting his position. Furthermore, there were rumours that the two were more than confidantes. Edward and Piers, some whispered, were lovers.

Contemporary chroniclers hinted at a sexual affair, but no one said anything openly. However, the close nature of Edward and Piers’ relationship had led to plenty of speculation. The two had become friends in 1300 when Edward was still Prince of Wales, and Gaveston became part of his household. He soon became a firm favourite with Edward lavishing gifts on him and others taking offence at the preference given to Gaveston.

Edward’s father, Edward I, sent Gaveston into exile in early 1307 but died soon afterwards. One of the first acts of Edward II’s reign was to bring his favourite home. Within weeks, he had made him Earl of Cornwall and arranged a rather advantageous marriage for him. The pair spent a lot of time together in those early months of Edward’s reign, even celebrating Christmas in one another’s company. And when the new king headed to France in January 1308 for his own wedding, it was the young, inexperienced and relatively low born Gaveston that he made regent in his place.

Edward, like many a medieval monarch before him, was marrying for political reasons. His bride was the only surviving daughter of King Philip IV of France and his wife, Joan of Navarre. Philip was one of the most powerful monarchs in Europe and had first suggested a marriage between Isabella and Edward in 1298 when his daughter was around two-years-old. Then, Edward had been the much hoped for male heir to the English throne. He arrived in France for the wedding already weakened by the gossip surrounding his relationship with Gaveston and his already clear weakness for following the advice of his favourite, no matter what the consequences.

However, the controversial reliance of the King on his favourite was put to one side as wedding preparations continued in earnest. 24-year-old Edward did homage to King Philip for his lands in France while his bride, just twelve at the time of the marriage, was given a magnificent trousseau for her forthcoming marriage. The ceremony was set to take place on January 25th 1308 at the Church of Our Lady of Boulogne. It turned out to be a royal wedding to remember.

Seven other kings and queens were present to see the King of England marry the daughter of the King of France. Isabella wore a dress of blue and gold with a crown presented to her by her father who had showered the young couple with jewellery as wedding gifts. Eight days of celebrations followed where Isabella, now Queen of England, was feted. Already known for her beauty and intelligence, she had been used to adulation from an early age. Her wedding seemed to cement the sparkling summit of her ambitions and the start of a life of increased royal power and prestige.

That all came crashing down on February 7th 1308 when she stood in the biting cold of Dover as her husband kissed the favourite who had already made more than his fair share of enemies. Worse was to come for Isabella. She quickly discovered that while Edward had a seemingly unstoppable reserve of cash for Gaveston, the money she had been promised was taking a very long time to reach her while the jewels her father had presented to her were being shared by the King with his favourite.

Edward and Isabella were crowned at Westminster Abbey on February 25th 1308 in a ceremony organised by Gaveston who attended wearing purple, a colour normally reserved for the King himself. At the banquet afterwards, Edward and Gaveston sat together while the new queen was left to fend for herself.

However, Isabella would soon see her husband’s favourite fall from grace. During her French wedding celebrations, some of Edward’s leading lords had plotted together in Boulogne for the removal of Piers Gaveston, and in May 1308, it was confirmed that he would be sent into exile after King Philip IV began to express his dissatisfaction at the way his daughter had been treated. Gaveston returned the following year, but the power struggle to remove him for good was in full swing by then. By 1312, Edward’s hold on power was fragmenting, and when leading lords turned against him decisively, he and Gaveston found themselves surrounded. Gaveston was captured and executed by his enemies soon afterwards.

Isabella now, technically, had the undivided attention of her husband, and the couple went on to have four children together. The Queen was a devoted consort in the early part of her marriage, but when Edward found another favourite, Hugh Despenser the Younger, Isabella began to change. When she only just escaped with her life when her husband failed to send support as she tried to flee a Scottish army, the Queen decided enough was enough.

She began building alliances including one with the powerful lord, Roger Mortimer, who became her lover around 1325. In the following months, the couple launched a bid for power which would ultimately topple Edward from his throne in January 1327. He died in September that year in mysterious circumstances with rumours beginning almost immediately that he had been murdered on the orders of the new regime, led by Mortimer and Queen Isabella.

Edward and Isabella’s marriage had been stormy, tempestuous and downright miserable at times but the King’s inability to give his wife her due position and Isabella’s own ambition meant that this union unravelled in a spectacular and bloody way. The seeds were sown on that chilly day in Dover when Edward II ignored his wife for his favourite and began his royal marriage with a kiss that crushed a queen.