‘Darling Mama’: The Tsarina and her mother, Princess Alice 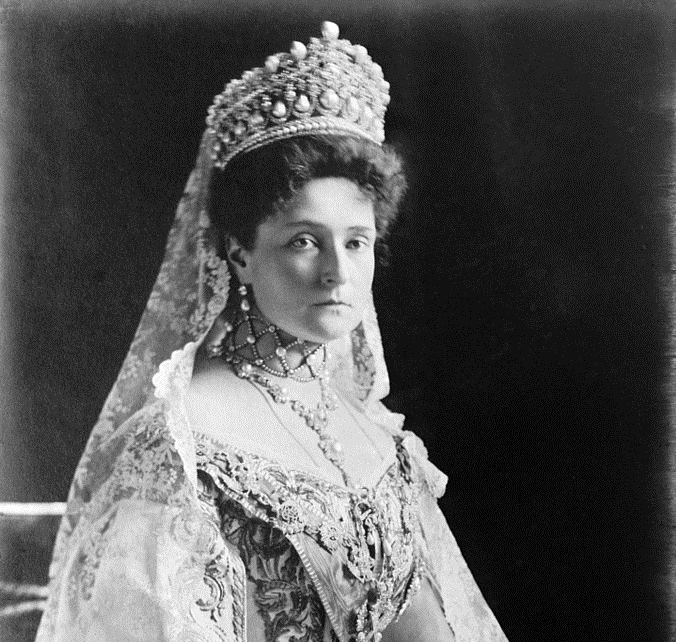 Princess Alix of Hesse, sixth child and fourth daughter of Queen Victoria’s daughter, Princess Alice, Grand Duchess of Hesse and her husband, Ludwig IV, Grand Duke of Hesse, was six years old when her mother died on 14 December 1878, incidentally the seventeenth anniversary of the death of Albert, the Prince Consort. This effect of this singularly shattering event on the young Princess Alix can be imagined. As a consequence of this, the princess developed a particularly close bond with her father, Grand Duke Ludwig, to which photographs strongly testify.

References by Alix relating to her mother after 1878 are rare. Such grief experienced so early in Alix’s life led me to suspect that despite her apparent virtual silence on the subject, some references made by Alix in relation to her mother must surely exist. Just as Prince Albert had his own afterlife until Queen Victoria’s own death, Princess Alice’s memory was kept alive in Queen Victoria’s family.

Alix would in fact, according to her biographer, Baroness Buxhoeveden, later regard the death of her father in 1892 as ‘perhaps the greatest sorrow of Princess Alix’s life’. Buxhoeveden recalled in her 1928 biography of the Tsarina – admittedly written down much later – of her father’s death that ‘for years she could not speak of him, and long after when she was in Russia, anything that reminded her of him would bring her to the verge of tears’. Alix, of course, lost her father much later than when she lost her mother, being three months short of her twentieth birthday. This loss was probably so much the greater for Alix because Grand Duke Ludwig IV had been Alix’s only remaining parent since she was six. Alix herself remembered according to Buxhoeveden, an ‘unclouded, happy babyhood, of perpetual sunshine, then of a great cloud’. (Baroness Sophie Buxhoeveden, The Life and Tragedy of Alexandra Feodorovna, 11). Prior to her mother’s death, Alix seems to have joined in with her sisters in the games of dressing-up, when the Hesse girls unpacked their mother’s clothes (Ibid, 6) and paraded down the corridors of the palace in crinolines. Examples of Alice’s accoutrements survive in the Schlossmuseum in Darmstadt.

Buxhoeveden states that the six-year-old Alix watched her mother’s funeral procession pass by the Neues Palais in Darmstadt, whilst herself in recovery from diphtheria. The fact that Alix was convalescent at the time may have added to the strange and ‘dream-like’ quality of that tragedy experienced so young. According to Buxhoeveden who personally knew her biographical subject well, Alix recalled those early months after her mother’s death many years later, when in early 1879, the six-year-old sat in the nursery with her old English nurse Mary Anne Orchard, surrounded by new toys, her old ones either having been burned or disinfected (Ibid, 12). Painfully, the nurseries were apparently on the same floor as her mother’s former rooms (Ibid, 6). The diphtheria outbreak which had struck all of the Hesse family with the exception of the second daughter, Elizabeth (‘Ella’), also claimed the life of Alix’s youngest sister, Princess Marie (‘May’), a particularly beloved child.

The royal residences in England that Princess Alix saw as a girl and young woman were the same ones associated with her mother Alice’s own childhood and youth. In January 1879 – the month after Alice’s death – the Hesse family travelled to Osborne, Queen Victoria’s Italianate villa on the Isle of Wight, in whose grounds stood the Swiss Cottage with Alice’s own vegetable garden, miniature wheelbarrow and gardening tools. In January 1879, the large painting of the family of Ludwig IV – including Alice – was brought over to Osborne for Queen Victoria, by Alice’s widower, Grand Duke Ludwig IV and the young Hesse children. The painting hangs in the Dining Room at Osborne – the room in which Princess Alice and Prince Ludwig of Hesse had married in 1862 – capturing a posthumously complete group, Princess Alice’s figure at the centre, whilst the young Princess Alix stands next to her father in a velvet-trimmed dress clearly identifiable with studio photographs made of her in 1878.

In her later childhood and early adolescence, there remained for Alix the inescapable fact of the missing mother. Photographs made of the Hesse children in the immediate period after the death of Alice show them dressed in mourning, in some sittings appropriately encircling the black-clad Queen Victoria, who as Europe’s grandmother, now tried to fill something of the gap left by Alice herself. One of the most poignant of these is of the young Princess Alix, surrounded by her sisters, all dressed in black and gathered around a cabinet on which is placed a photograph and small bust of their mother Alice. It is an interesting recreation of Queen Victoria’s family, grouped around a bust of the dead Prince Consort. The little Princess Alix is sat directly beneath her mother’s bust and may be holding a photograph of her. The photograph survives in the voluminous leather-bound albums in the Royal Archives.

An edition of Alice’s letters to Queen Victoria was published in the original English as a selection by John Murray in 1884 with a foreword by Alice’s younger sister, Helena, Princess Christian of Schleswig-Holstein. It was dedicated to the widowed Grand Duke Ludwig IV of Hesse and the remaining Hesse children, including Princess Alix. An edition of the letters in German, Alice: Grossherzogin von Hessen und bei Rhein, Prinzessin von Grossbritanninen und Ireland, [Alice, Grand Duchess of Hesse and by Rhein, Princes of Great Britain and Ireland] published in Darmstadt in 1883 and bound in paper, leather and silk, was owned by Princess Alix, who autographed her copy on the flyleaf: ‚Alix von Hessen, 1884, Darmstadt’. It has survived in the collections in Russia.

This volume was among many of the books which Alix took with her to Russia on her marriage to Tsar Nicholas II of Russia, which had belonged to her mother, including a book printed in London in 1850 and bound in leather and silk, entitled Gleanings from Pious Authors by Montgomery. The latter was autographed by her mother as a gift to her former French teacher, Mme Rolland: ‘Somi Rolland de la Sang from Princess Alice/Windsor Castle/1850’. (ed. Marilyn Pfeifer Swezey, Nicholas and Alexandra: At Home with the last Tsar and his family’, 116).

Among other printed tributes to Alice made at the time was the volume by Hatchards entitled Foot-prints of a life: In memory of the beloved Princess Alice, of Great Britain and Ireland, Grand Duchess of Hesse Darmstadt, as well as J. Oswald Jackson’s A royal idyll, for the maidens of England: being the life story of the Princess Alice and J. F. B. Tinling’s Lessons from the life and death of the Princess Alice, Grand Duchess of Hesse Darmstadt, both in 1879. Others would follow.

I was particularly interested to discover the Tsarina’s private ledger of gifts auctioned at Sotheby’s in 2018. Researching this object, it became clear that even as Alexandra Feodorovna, consort of Tsar Nicholas II and in far-distant Russia, the Darmstadt linkage was just as strong. Her ledger recorded an entry for Fl. Berbenich, the housekeeper in the Neues Palais in Darmstadt who had witnessed the sadness of the Hesse household after Alice’s death. Also included were annual presents to the Princess Alice Hospital in Darmstadt, named after her beloved mother.

There is a touching afterword to all this. In the 1890s, an Englishman from Yorkshire, Edward W. Darby, wrote a fairy tale based on the life of Princess Alice, Grand Duchess of Hesse. This charming story was printed by Swan Sonnenschein & Co., bound and illustrated. We know of course, that Princess Alix came to Harrogate in 1894 to take the waters as part the cure advised for her sciatica. She travelled to Harrogate in May 1894, the month after her engagement to the Tsarevich Nicholas of Russia. Edward W. Darby who lived in Harrogate, sent Princess Alix a copy of his story before she left and received a personal letter of thanks. (ed. P. H. Kleinpenning, The Angel Princess, 3). The letter was reprinted in the Swan Sonnenschein & Co edition, which suggests that Mr Darby may have sent Princess Alix the story first in manuscript form because his personal letter of thanks followed in the published edition. The letter is important because it refers directly to a story written about the life of her mother but unsurprisingly, contains no personal recollections of her own. Written and dated from Harrogate, the letter read:

Your kind thought of sending me that little fairytale [sic] has touched me & given me great pleasure. I send you my most sincere thanks. I am sorry my stay here has come to a close, otherwise, I should have been glad to make your personal acquaintance and to tell you how pretty I found your simple & yet touching story. To have written it you must surely have many recollections of my beloved Mother. –

As the bride of Tsar Nicholas II and taking her new name of Alexandra Feodorovna, the young Tsarina brought distant remembrances of her German girlhood over with her to Russia. In Alexandra’s beautiful Rosewood Drawing Room or ‘Pallisander Room’ at the Alexander Palace in Tsarskoe Selo, was kept a memorabilia chest containing among other precious items, objects relating to her childhood in Darmstadt. Perhaps importantly, she hung in this same room a vast painting of Romrod Castle in Hesse and a portrait of her mother, Princess Alice, possibly by the Viennese artist Georg Koberwein, who had painted Alice in her wedding dress in 1862, as a copy of the head and shoulders of Winterhalter’s better known portrait of Alice in a ball gown, the latter now displayed in the Vestibule at Buckingham Palace. This painting of her mother seems to have been hung alongside a portrait of her father, Grand Duke Ludwig IV by the artist Plueskow and importantly, in the same room. In a private letter-card to a close friend in late 1903, Alexandra chose a view of Darmstadt showing the so-called ‘Alice-Denkmal’ [Alice Memorial] in Darmstadt, erected not far from the site of the Neues Palais but on the card makes no reference to her mother.

There are scant direct references to Alice in Alix’s own letters, prior to her marriage to Tsar Nicholas II but they are nevertheless, all the more significant because of their scarcity. When writing a letter to her fiancé the Tsarevich Nicholas from Windsor in April 1894, she stamped her letter with ‘a thing that belonged to darling Mama’. Writing to Queen Victoria, her English grandmother and something of an ersatz mother, she wrote possibly the most revealing sentence of all. It was written from Harrogate, whilst she was taking her cure: ‘Ever since dear Mama died… I cling to You more than ever, now that I am quite an Orphan…’