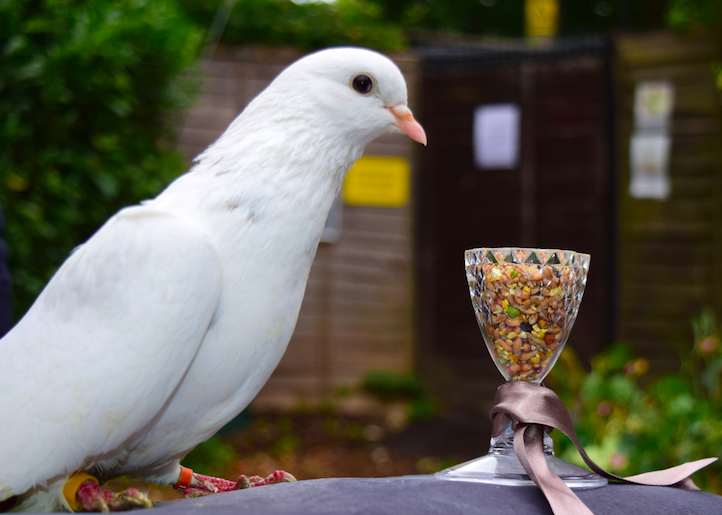 A rescued pigeon has been renamed in honour of The Queen to commemorate the occasion of her 73rd wedding anniversary to the Duke of Edinburgh.

People for the Ethical Treatment of Animals (Peta) have called the pigeon Elizabeth in the hope that the gift will encourage The Queen to end her participation in pigeon racing.

Animal rights group Peta say that pigeon racing is cruel and that Her Majesty should no longer have any association with the sport.

PETA Director Elisa Allen said: “Just like the Queen and Prince Philip, pigeons are caring parents and devoted mates. These loyal birds suffer tremendously when separated from their companion to be used for racing, as the high death toll means they may never be reunited.

“PETA is respectfully urging Her Majesty to stop sending birds to their deaths for this heartless sport.”

The Queen is Patron of the Royal Pigeon Racing Association and continues her interest in the birds with Her Majesty’s installing new pigeon facilities at Sandringham only a few years ago.

Winning every single major UK race, Her Majesty is one of the most successful owners and breeders of racing pigeons in the United Kingdom.

In 1886, King Leopold II of Belgium bestowed a gift of racing pigeons to the Royal Family, a proper racing loft was then built on the Sandringham Estate. The Royal Lofts as they would be known would house pigeons that won a good number of prestigious races for both King Edward VII and King George V.

During the World War, I and World War II, pigeons from the Royal Loft acted as carrier pigeons to assist in the war effort. In 1940, one of the pigeons ‘Royal Blue’ won the Dickin Medal for Gallantry for its part in relaying information about a lost aircraft.

During World War II and subsequently after, The Dickin Medal was conferred on any animal exhibiting outstanding bravery and loyalty to duty. There were 53 Dickin Medals awarded with 32 of the awards given to pigeons. Mrs Maria Dickin, the founder of the People’s Dispensary for Sick Animals, began the awarded known as the ‘Animal Victoria Cross’ or ‘Animal VC.’

After World War II, the pigeons went back to racing, continuing their winning records in both national and international events.

Her Majesty owns around 200 of the birds. Some are for breeding purposes but most for racing.

In recent years, Her Majesty donated a baby pigeon from the Royal Lofts to raise funds for the Animals in War Memorial Fund.