A monument that mentions a royal kiss 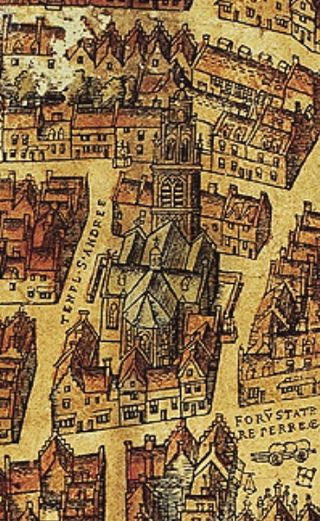 The sixteenth century late-Gothic Sint-Andrieskerk on the Augustijnenstraat in Antwerp preserves a monument with a quite extraordinary royal connection, for which reason many English visitors in particular, seek it out. In 1513, Augustine friars established a chapel and a convent the following year, but as the chapel itself proved too small, plans for a larger building were conceived which would form the parish church of St Andrew’s, finally consecrated in 1529.

A version of the St Andrew’s cross (saltire) was an emblem employed by the Valois Dukes of Burgundy in the fifteenth century Cross of Burgundy, the Burgundian Netherlands becoming the Spanish Netherlands on the death of Charles the Bold, the last Valois-Burgundy Duke. The outbreak of the Iconoclastic Fury (Beeldenstorm) which affected the Low Countries in 1566 resulted in the widespread destruction of forms of church art and images during the Reformation. As part of this, the interior of St Andrew’s Church was also destroyed. The church itself became caught in a religious tug-of-war between Catholics and Calvinists, and it was not until after the Fall of Antwerp in 1585, that the church could once again become Catholic and its interior rebuilt.

The church was closed during the period of the French occupation; it suffered again as a result of the Dutch bombardment of Antwerp in 1830, as did the whole parish surrounding the church. Restoration work followed in 1842, and the church was declared a protected monument in 1938. The church was again severely damaged by bombing during the Second World War. However, amidst the tumult of war and destruction, many remarkable monuments have almost miraculously, survived. One of these is to be found in the right aisle of the church. Dating from around 1620, it was attributed to Robert and Jan De Nole with a royal portrait on copper by Frans Pourbus the Younger (1569-1622) which shows Mary, Queen of Scots (1542-1587).

A watercolour on paper, today held in the Print Room of The Scottish National Portrait Gallery, is a fitting starting point for the story behind this remarkable monument. Entitled “The Execution of Mary, Queen of Scots, 1542 – 1587” (PG 1217), the illustration shows Mary, Queen of Scots at the moment of her execution at Fotheringhay Castle in Northamptonshire, the executioner poised to deliver, as we know now, the first of what was to be a horribly misaligned set of blows – occasioned by clumsiness or nervousness, depending on the truth – the head of the Queen of Scots was finally severed with the blade of the axe being employed as a saw. (Something her grandson Charles I was fortunately not to suffer in his own case in 1649). The watercolour was intended for a Dutch recipient – a magistrate – who compiled an album in around 1613. The work, despite stylistic errors, does contain eyewitness accuracy on certain points, such as the burning of the Scottish queen’s “clothes and ornaments” (John Guy, My Heart is My Own, 9) to prevent the veneration of relics as viewed by Catholic sympathizers, Mary – in a controversial but unmistakably theatrical gesture – wore red for her execution, the liturgical colour for martyrdom in the Catholic Church. Also in the watercolour however, are two women – one of which appears to be wringing her hands in distress, the other holding a handkerchief up to her eyes – details which are only evident from a high amplification of the image. These were Mary, Queen of Scots’ ‘gentlewomen’ and their names were Elizabeth Curle and Jane Kennedy.

It was a sign of their being so well favoured by the Scottish queen, that they were in the end permitted – on Mary’s request – to join her in the procession of her execution. Four gentlemen from Mary’s entourage also accompanied them. Mary’s ‘gentlewomen’ then assisted her in preparing her dress, including passing her some detachable sleeves – both were weeping. According to the historian John Guy, it was Jane Kennedy who covered the eyes of the Scottish queen, with a white Corpus Christi cloth embroidered in gold, which Mary herself had selected. Importantly, Jane Kennedy kissed the fabric before she bound it around the eyes of her royal mistress (Guy, Pg 7-8, 2004). This scene was romantically portrayed by the nineteenth-century French portrait painter Alexandre-Denis-Abel de Pujol. Both Jane and Elizabeth then left the scaffold, having both been kissed by the Queen. They both also feature in a contemporary sketch of the execution held at the British Museum, seen undressing the Queen of Scots.

Jane Kennedy did not join her fellow ‘gentlewoman’ Elizabeth Curle – with whom she had shared not only her life but also the later life of Mary, Queen of Scots – in Antwerp. Jane Kennedy married the Scottish queen’s former steward Andrew Melville but tragically drowned on her way to Denmark in 1589, having been ordered by the future James I to join the entourage to escort his bride, Princess Anne of Denmark to Scotland, a sign of royal favour in recognition of her loyalty to his mother, Mary, Queen of Scots.

This portrait that Elizabeth Curle commissioned of her beloved mistress – a copy of which is in the Royal Collection – is today held at Blairs College Museum in Aberdeen, The Museum of Scotland’s Catholic Heritage. It is full length and fittingly, shows alongside the central figure of the Queen, the execution scene to the left and the right, Elizabeth Curle and Jane Kennedy themselves. The portrait is remarkable and is the highlight of the Museum’s collections, not least because of its extraordinary survival of the French Revolution through its being rolled up and hidden in a chimney, after it was given to the Scots College at Douai. Elizabeth Curle had given it to her nephew, the Jesuit Hippolytus Curle.

It is a permanent monument to Elizabeth’s devotion to her royal mistress – so much so that this devotion even dominates her own monument in death.