A look at the Belgian line of succession 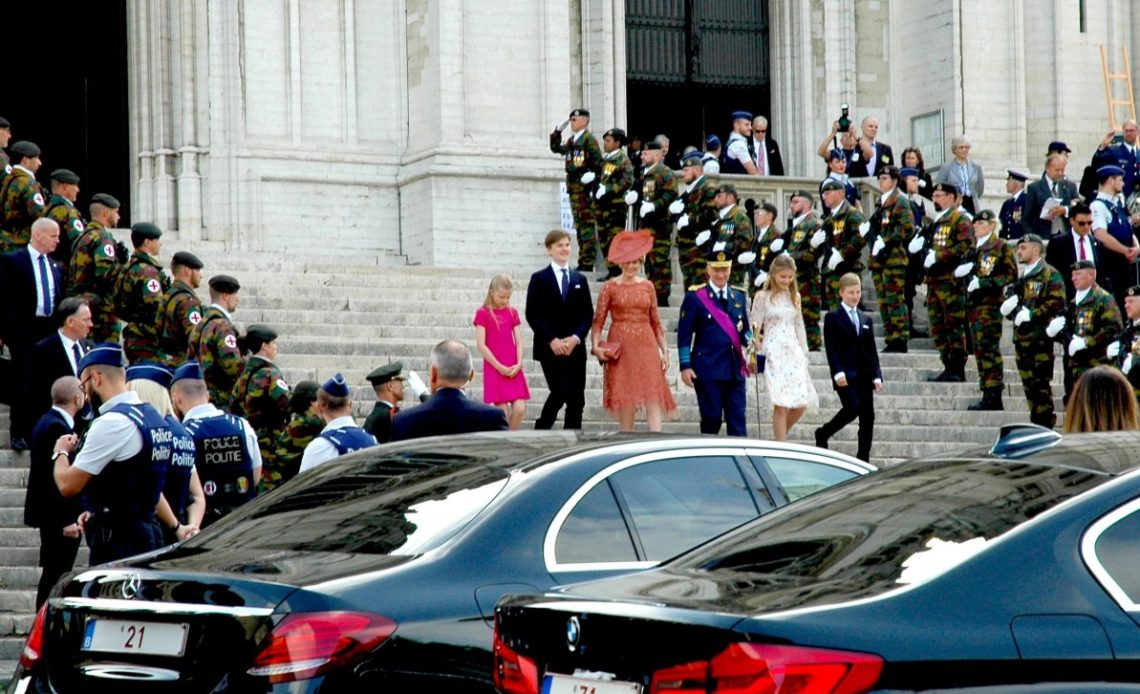 Today we’re looking at the line of succession to the Belgian throne.

Current Monarch: King Philippe, who succeeded his father, King Albert II, on 21 July 2013 after he stepped down for health reasons.

King Philippe was considered by many to be the heir to his uncle, King Baudouin, but after his death in 1991, Baudouin’s younger brother, Albert succeeded to the throne.

The line of succession to the Belgian throne is as follows:

Seventeen-year-old Princess Elisabeth is the eldest child of King Philippe and Queen Mathilde and became the heiress apparent to the Belgian throne in 2013 when her father succeeded her grandfather, King Albert II. She assumed the title Duchess of Brabant at that time.

Thanks to a new succession law created ten years before her birth, Princess Elisabeth could not be replaced in the line of succession by the birth of a younger brother – she has two: Prince Gabriel and Prince Emmanuel – and will be Belgium’s first queen regnant if she assumes the throne as expected.

Princess Elisabeth currently studies at the UWC Atlantic College in Wales and will graduate in May 2020, though she won’t officially take up royal duties until she’s finished with schooling. She speaks Dutch, French, German and English and is the first (future) Belgian monarch whose education began in Dutch.

Prince Gabriel is the second child and first son born to King Philippe and Queen Mathilde, and he was born on 20 August 2003. He attends school in Brussels and is reportedly a big sports fan and athlete, participating in football, cycling, tennis, swimming, skiing, sailing, and hockey.

Prince Emmanuel is the third child and second son of King Philippe and Queen Mathilde, and he was born on 4 October 2005. One of his godfathers is Hereditary Grand Duke Guillaume of Luxembourg.

Prince Emmanuel currently attends the Eureka special school in Kessel-Lo, which he attends due to his dyslexia. He is also a huge sports fan and athlete and plays the flute.

Princess Eléonore is the youngest child and second daughter of King Philippe and Queen Mathilde and was born on 16 April 2008. Her two godmothers are Crown Princess Victoria of Sweden and Princess Claire of Belgium.

Princess Eléonore is also musical; she plays the violin and has accompanied her mother to the musical Queen Elisabeth Competitions.

Princess Astrid, Archduchess of Austria-Este, is the younger sister of King Philippe and the only daughter of King Albert II and Queen Paola.

She married Archduke Lorenz of Austria-Este in 1984 and has five children with him, all of whom are in the line of Belgian succession.

Though her family is in the line of succession now, that wasn’t always the case. Belgium still practised agnatic primogeniture at the time of her marriage, which meant that Princess Astrid had no rights to the throne. When absolute primogeniture was established in 1991, Princess Astrid was placed back in the line of succession – after Parliament confirmed that, though she hadn’t received consent for her marriage because she hadn’t needed to ask for it, she would have received it if she’d needed it – along with her children.

Prince Amedeo is the oldest son of Princess Astrid and Prince Lorenz and was born on 21 February 1986. His godparents are King Philippe and Queen Paola.

His succession rights were only confirmed in 1991, and it was thought that he’d lost them when he married Italian Elisabetta Rosboch von Wolkenstein in 2014 as no royal authorisation was published. In 2015, King Philippe published an article granting his retroactive permission, confirming that Prince Amedeo was still in line to the Belgian throne.

He and Princess Elisabetta have one daughter, Archduchess Anna Astrid, and it was recently revealed that they are expecting their second child.

Currently, the youngest person in line to the Belgian throne is Archduchess Anna Astrid, the only child of Prince Amedeo and Princess Elisabetta. She was born on 17 May 2016 in Brussels.

Princess Maria Laura, Archduchess of Austria-Este, is the oldest daughter of Princess Astrid and Prince Lorenz of Belgium and was born on 26 August 1988.

Princess Maria Laura keeps a low profile and has studied in Brussels, London, China, and Paris.

Prince Joachim, Archduke of Austria-Este, is the second son of Princess Astrid and Prince Lorenz and was born on 9 December 1991.

Unlike his older brother and sister, Prince Joachim was born a Prince of Belgium, as his grandfather, King Albert II, had succeeded to the throne by the time of his birth. Prince Amedeo and Princess Maria Laura were several years old before they were given royal titles and placed in the line of succession.

Prince Joachim is an officer in the Belgian Navy.

Princess Luisa Maria, Archduchess of Austria-Este, is the second daughter of Princess Astrid and Prince Lorenz and was born on 11 October 1995.

She is the first Belgian princess to be born with succession rights to the throne, as she was born after the 1991 change to absolute primogeniture. Princess Luisa Maria is reportedly studying at McGill University in Montreal, Canada.

Princess Laetitia Maria, Archduchess of Austria-Este (above on the right), is the last child and third daughter of Princess Astrid and Prince Lorenz and was born on 23 April 2003.

She is currently a student at Bromsgrove School in Worcestershire.

Prince Laurent is the youngest child of King Albert II and Queen Paola and was born on 19 October 1963.

At the time of his birth, he was third in line to the throne, but after absolute primogeniture was established, he was displaced by his older sister, Princess Astrid, and her family, and has now dropped to 12th in line.

Known as something of a black sheep in the Belgian Royal Family, Prince Laurent has seen his share of scandals. He married Princess Claire in 2003, and they have three children.

Princess Louise is the only daughter of Prince Laurent and Princess Claire and was born on 6 February 2004.

Prince Nicolas (above, third from left) is the second child and oldest son of Prince Laurent and Princess Claire and was born on 13 December 2005. He has a younger twin brother, Prince Aymeric.

Prince Aymeric is the third child and youngest son of Prince Laurent and Princess Claire and was born on 13 December 2005.

You can read the rest of our summer series on lines of succession here.