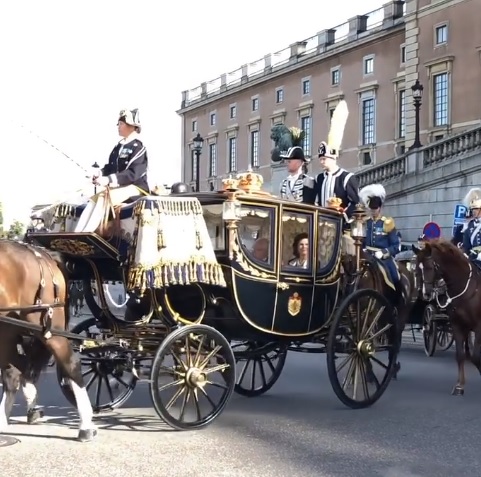 King Carl XVI Gustaf has overseen the official opening of the Swedish parliament, the Riksdag. The new parliamentary year has thus begun. The King was accompanied by Queen Silvia, Crown Princess Victoria and Prince Daniel.

Before the ceremony, the King, Queen, Crown Princess and Prince Daniel travelled in a horse-drawn procession from the Royal Palace to the Riksdag building, where Speaker Andreas Norlén received the royals on the stairs. At the parliament, grenadiers from the Life Guards and the Army’s music corps paraded and held a short concert in honour of the King.

During the ceremony His Majesty the King gave a speech in which he said: “This year it is 400 years since King Gustaf II Adolf founded the cities of Gothenburg, Borås, Sundsvall, Luleå and Piteå in one and the same year. Today, hundreds of thousands of Sweden’s inhabitants live in these cities. There are companies, authorities and universities. Decisions made in 1621 still shape our country today, four centuries later. I wish you, elected representatives of the people of Sweden, power, courage and wisdom in your important work. I hereby declare the 2021/2022 Riksdag open”.

Inside the Riksdag chamber, the opening ceremony began with the members singing the King’s Song. The President then requested that the King open the Riksdag. In conclusion, the King declared the Riksdag to be opened. During the ceremony, music was performed by Tuva B Larsen and Philip Jalmelid as well as members of The Royal Philharmonic Orchestra. The opening of the Riksdag ended with the assemblies singing the national anthem, after which the King and Queen, the Crown Princess and Prince Daniel, the Speaker, the Prime Minister, the Vice-Speakers, the Marshal and the Director of the Riksdag walked out to the tunes of the Grande Marche.