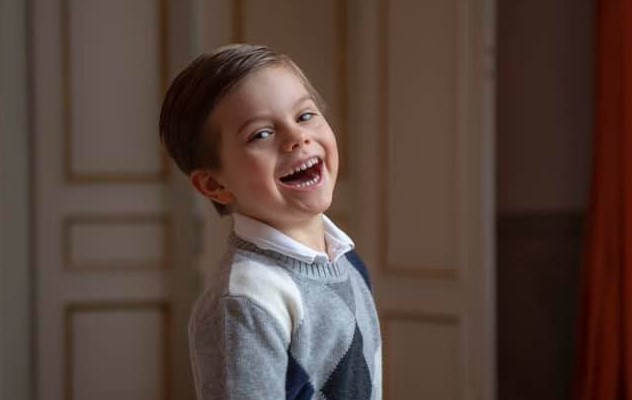 The photos were taken at Haga Palace by Kate Gabor. They are from the same set as the photos released for his elder sister, Princess Estelle’s birthday last week.

Due to the ongoing pandemic, the Prince will celebrate his birthday at home at Haga Palace in Solna.

The Crown Princess Family regularly releases images of their two children, Princess Estelle and Prince Oscar, to the media and the Swedish public. They traditionally release photos on their birthdays, Sweden’s National Day, and Christmas, as well as other important events. As a result, the Swedish people and media leave the family alone in public; you don’t see paparazzi on the streets following them as they conduct their day-to-day private lives.

Oscar is the younger child and only son of Crown Princess Victoria and Prince Daniel of Sweden. He has one older sister, Princess Estelle, who celebrated her ninth birthday on 23 February. He featured alongside her in one of her birthday images released to mark the occasion in February.

The young royal was born on 2 March 2016 in Karolinska University Hospital. His name and titles were announced by his grandfather, King Carl XVI Gustaf in a cabinet meeting on 3 March as His Royal Highness Prince Oscar Carl Olof, Duke of Skåne.

Prince Oscar is third in the line of succession to the Swedish throne behind his mother and older sister.