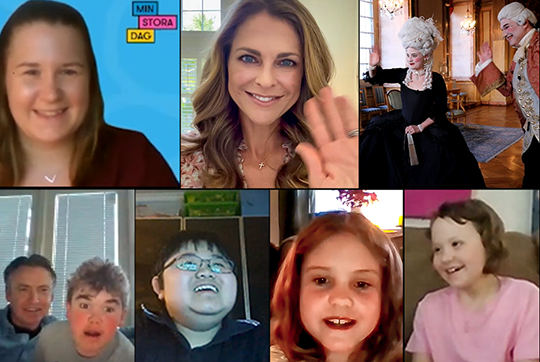 Princess Madeleine surprised a group of children on a virtual tour of the Royal Palace of Stockholm on Tuesday. The children digitally visited the palace with the charity MinStoraDag (My Big Day) of which Princess Madeleine is patron.

MinStoraDag is similar to the Make-a-Wish Foundation. They work with hospitals and other healthcare providers to make wishes of seriously ill children and their families come true.

At the end of their tour, Princess Madeleine made a surprise appearance to fufill the wishes of the children who wanted to meet her. In the video, she said: “Hello! I hope you had a great time at the palace! I’m so sorry I could not be there and show you around and show where I, my sister and my brother hid or where we thought it might be haunting. But I hope I may be able to do it another time!”

She concluded her remarks by sending a virtual hug to the children saying, “Kram, kram (hug, hug in English).”

Princess Madeleine resides in Florida with her family. She has been unable to return to Sweden due to the COVID-19 pandemic. The Royal Court recently revealed that Madeleine and her husband, Chris, have been vaccinated against the virus – meaning they may be able to return to Sweden by summer. Unfortunately, Madeleine will be forced to miss her father’s 75th birthday dinner later this month, but the Information Manager at the Royal Court, Margareta Thorgen, said the Princess would attend digitally.