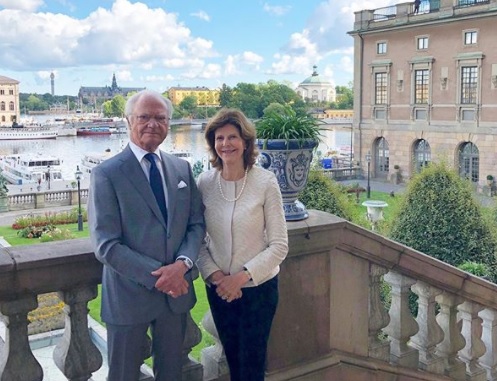 The 1972 Summer Olympic Games were held in Munich, Germany, where a young German-Brazilian Silvia Sommerlath was working as an interpreter and host. At the time, she was employed at the Argentinian Consulate in Munich. From 1971 to 1973, she worked for the Organising Committee for the Munich Olympic Games. A polyglot, Silvia’s work at the Olympic Games as an interpreter was a natural fit. She spoke her native German and Portuguese, French, Spanish, and English. When she accepted the position, she had no clue how her life would soon change.

Crown Prince Carl Gustaf of Sweden travelled to Germany to support the Swedish athletes. At the time, he was the heir apparent to the Swedish throne. While there, he was introduced to a beautiful hostess by the name of Silvia, whose job was to guide some of the high profile guests attending the games. That day, he asked Silvia out on a date, and just a few hours later, they had dinner. As he would later say, they ‘just clicked’ after their initial meeting.

In 1973, a year after he met his future bride, Carl Gustaf would become King Carl XVI Gustaf of Sweden on 15 September, after the death of his grandfather, King Gustaf VI Adolf.

Silvia visited Carl Gustaf in Stockholm a number of times and reportedly once disguised herself in a blonde wig to throw off the press. She also did not tell many of her friends who she was dating in hopes it would remain private for as long as possible. By the beginning of 1973, the couple had been photographed together riding in a car by a Swedish journalist. Many people at the time assumed the mysterious woman in the vehicle was Margarita of Romania since the King had previously been linked to her. The couple spent time in Switzerland, France, and on the estate of Prince Otto von Bismarck when they wanted to get away from the ever-curious Swedish media. By 1974, Silvia had moved into an apartment in Stockholm, which was owned by Carl Gustaf’s older sister, Princess Christina.

The pair would date for four years before he summoned up the courage to ask for her hand in marriage. On 12 March 1976, they announced their engagement. He proposed with his late mother Princess Sibylla’s engagement ring. Silvia had begun to learn the Swedish language at this point, and during their interview after their engagement, Silvia spoke as much as she could in Swedish. One memorable moment from the interview had Silvia asking Carl Gustaf, in English, if he could help her answer the question in Swedish. Not entirely confident in her Swedish language abilities at the time, she would go on to become completely fluent in her sixth language.

The King waited to propose to Silvia because of his grandfather’s firm belief and unwillingness to bend that royals should only marry other royals. If Carl Gustaf had married Silvia while King Gustaf VI Adolf was still on the throne, he would have lost his place as the heir-apparent to the Swedish throne.

They were married on 19 June 1976 at Stockholm Cathedral in the Swedish capital, two days after Silvia became a Swedish citizen. Their wedding was the first of a reigning Swedish monarch since 1797. The evening before the wedding ceremony, a Royal Variety Performance was held, where the Swedish pop group ABBA performed their new song “Dancing Queen” as a tribute to Silvia. The group later noted that the song had not been written specifically for the new queen, but they wanted to dedicate it to her that evening.