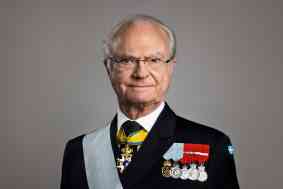 The political situation in Europe is tense after the Russian invasion of Ukraine. One of the significant consequences is that the neutral nations of Sweden and Finland have applied for NATO membership. In the recent years, Sweden has invested heavily in upgrading its military, and King Carl XVI Gustaf visited the Swedish Air Force to watch military defence exercises.

The Swedish King participated in a major air defence exercise, and warplanes from neighbouring Finland participated. The exercise was centred around defending Swedish territory from a foreign attack, and the King got a thorough look at how a defence war should be waged in the air. The exercise was held from the air force base in Satenas, in the far west of Sweden, not far from the border with Norway.

The visit by the King began at the airport, where His Majesty got to see the air base and the planes that were used in the exercise and will be used in a possible armed conflict. Then, the King went out into the field to see how various manoeuvres are carried out and what the air defence of Sweden will look like. Out in the field, the King met personnel who participated both during the exercise and pilots who fly such aircraft. The Home Guard and voluntary forces had also turned up to appear before the Swedish monarch.

After several hours out in the field, King Carl Gustaf travelled back to the air base. He received a solid field ration with stew and ate with a selection of soldiers and officers from the air force. After lunch, the King got to visit the students at the air base and hear about their everyday life.

The day ended outside in one of the airport’s many hangars. His Majesty learned more about how the Swedish fighter jet Jas-39 works. He also got to inspect an American-made F-18, which is in Finnish service. King Carl Gustaf eagerly followed what he was shown. Before departure, the King got to see how these two planes can land on extremely short runways.

It was the ancestor of the current King, King Carl Johan, who in 1818 decided that the Kingdom of Sweden should be a neutral country. Many times this has been put to the test, King Carl XV was not far from ending up in war with Russia in the 1860s, and in World War II, Sweden was about to end up in the war as well. However, it was not until 204 years after 1818, that during Carl XVI Gustaf’s reign that Swedish neutrality came to an end.