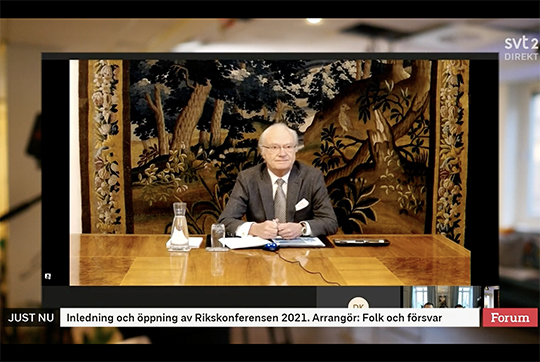 King Carl Gustaf of Sweden has been joined by Crown Princess Victoria and Prince Daniel at the annual Swedish Defence conference. The conference was this year digital due to the coronavirus pandemic, but the King kept up his tradition of his attendance on the conference. This years conference was also broadcasted live on Swedish TV on the channel SVT2.

At the opening of the national conference on January 11th 2021, the King gave with a live greeting to this year’s participants and audience. In his greeting, the King said: “I have had the opportunity to attend the conference for a number of years. I believe that this conference will be as good as ever. I look forward to it and wish you all the best of luck and prosperity.”

The seminar is run by the organisation “People and Defence” and is regarded as Sweden’s most important forum for discussions on security politics, defence and Swedish war preparedness. It is not just military participating in the seminar. In addition, politicians, civil organisations, professional organisations, the Swedish business community and representatives of several youth organisations were present along with the King at the seminar.

King Carl XVI Gustaf has a special role in Swedish defence. As most monarchs worldwide, he is his nation’s top military commander. The King completed his military service in 1968 when he graduated as a naval officer in the Royal Swedish Navy. Afterwards, he took leadership courses and became a Lieutenant in the Svea bodyguards, Navy, Air Force and the Jemtland regiment. After the King ascended the throne when his grandfather died, he achieved the rank of Captain for both the Swedish fleet, army and air force through military education. He was automatically General and Admiral when he became King.