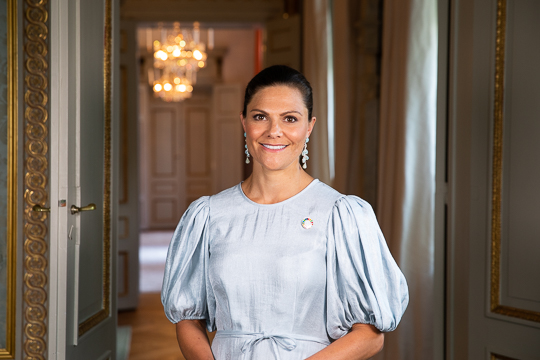 Crown Princess Victoria of Sweden continued her annual tradition of awarding the Stockholm Junior Water Prize on Tuesday as part of the annual World Water Week in Stockholm.

Due to the global health situation, the ceremony was again held digitally for everyone’s safety. The Crown Princess addressed the attendees in English via a video from Stockholm.

This year’s winner is Eshani Jha, who is a first-year student at UC Berkeley in California. She won the award for her research on how to remove pollutants from water.

In her remarks, Her Royal Highness asked what the world will look like in 25 years. She spoke of how the world is in “an era of innovation. At great speed, science is breaking new ground.”

Victoria spoke of how those innovations are opening new opportunities for humanity and the planet.

She also stressed how the world is becoming more aware of the vulnerability of the earth. She spoke of global warming and the choices we make, and how they impact the planet. The Crown Princess spoke of her pride in the award and the finalists looking to solve problems.

Victoria told the finalists: “Your innovations are remarkable. And your passion for water and science is truly inspiring. Today, as we celebrate your achievements and excellence, we should also acknowledge your perseverance, carrying out your projects at a time when many countries have been on lockdown, and many schools have been closed…you set an example to all of us.

“I am certain that you will continue to inspire people of all ages and that your creativity and innovations will play an important role in the next 25 years.”

The Stockholm Junior Water Prize is an international science prize for those between the ages of 15 and 20. There were people from 30 countries who took part this year. Crown Princess Victoria has been the patron of the organisation since 1994.

World Water Week takes place from 23-27 August this year, with experts and innovators from across the globe gather digitally to discuss water issues.