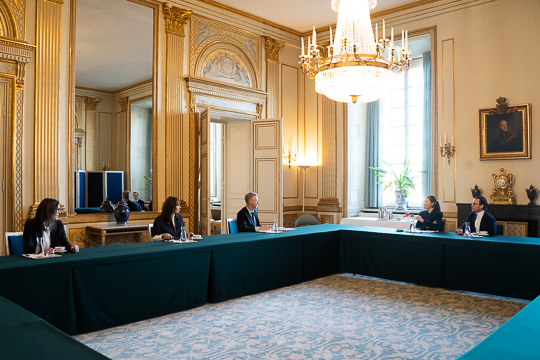 Crown Princess Victoria and Prince Daniel of Sweden have granted an audience to representatives from Business Sweden at the Royal Palace.

About the meeting, the Royal Court said: “At the audience, Crown Princess Victoria and Prince Daniel received information about the situation for Swedish export companies, the work of promoting investments in Swedish companies and the plans for future delegation trips.”

This is just one of many meetings that Crown Princess Victoria and Prince Daniel have had with Business Sweden in recent years, both digitally and in person. King Carl XVI Gustaf and Prince Carl Philip have also had meetings and highlighted the vital work done by the organisation.

In November 2018, the Crown Princess and Prince Daniel visited Business Sweden’s office in Stockholm to learn more about its practices and the organisation as a whole.

Business Sweden is jointly owned by the Swedish government and, via the Swedish Foreign Trade Association, representatives from the Swedish business community.

Business Sweden’s purpose is to help Swedish companies to grow their global sales and international companies to invest and expand in Sweden. Formed in January 2013, it was created from a merger between the government agency Invest Sweden and the organisation Swedish Trade Council.

Business Sweden has also played a central role during many of the Swedish state visits to other nations.